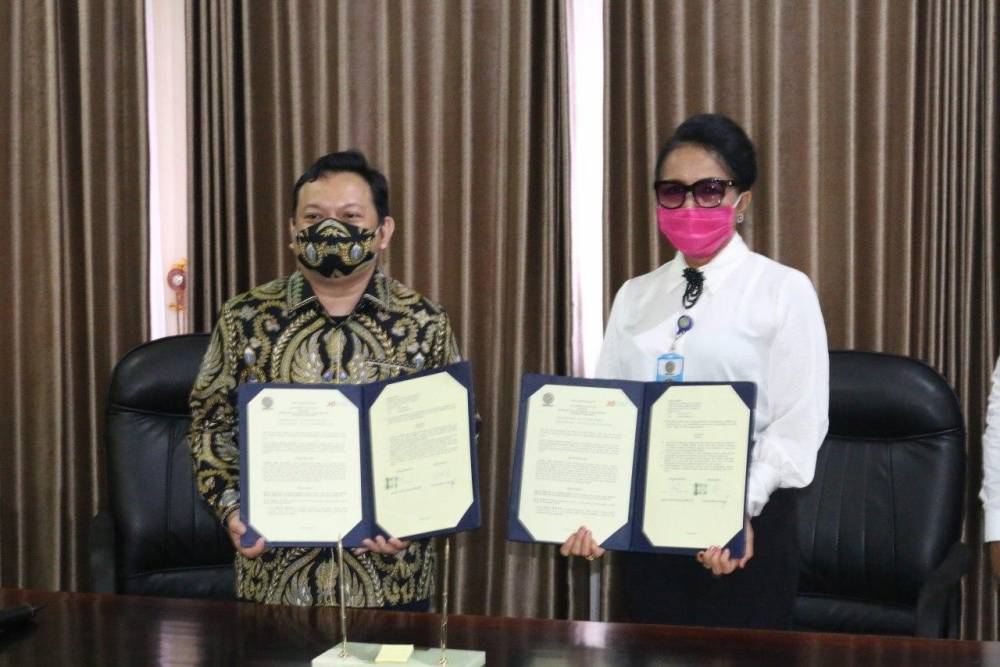 Udayana University has collaborated with the Indonesian Internet Domain Name Manager (PANDI) which was marked by the signing of a Memorandum of Understanding between the Rector of Udayana University and the Chair of PANDI at the Rectorate Building, Jimbaran Campus, Monday (26/10/2020).

The signing of the Memorandum of Understanding was also attended by the Vice Rector for Planning, Cooperation and Information, the FIB Dean and the Vice Dean I, Bali Literature Koorprodi, Chair of UPIKS FIB, Deputy Chairperson for Business Development, Cooperation and Marketing PANDI, Deputy Chair for Development, Applied Research PANDI Innovation and Engineering, and Deputy Chairperson of PANDI's Registry, Secretariat, Legal, Government Relations and Public Relations.

The signing of this Memorandum of Understanding was initiated by the Faculty of Humanities, Udayana University. This collaboration is a very important thing for Udayana University, especially in relation to the program that will be followed up by the Parties, namely Knitting the Archipelago, which is a program in the context of digitizing existing characters in the archipelago, one of which is Balinese script.

Through the signing of this Memorandum of Understanding, the Rector gives full support and is ready to become a partner of PANDI to register Balinese script as one of the characters for the Web Domain. The Rector also gave his appreciation because currently Balinese script is a priority for PANDI after Javanese script. The Rector hopes that Udayana University will become a pioneer with the support of PANDI and Kominfo.
Through this opportunity, the Rector also hopes that the Dean of the Faculty of Cultural Sciences will implement the technical cooperation between PANDI and the Faculty of Cultural Sciences as well as possible, so that the Balinese script digitization program can be achieved as expected.

While the Head of PANDI Prof. Yudho Giri Sucahyo, M.Kom, Ph.D expressed his appreciation for the signing of the cooperation which opened doors for various activities. The Chairperson of PANDI also salutes the Bali Provincial Government through a regional regulation issued by Balinese script that can be seen in almost every public facility. Let us continue this initiative to re-enter the world of young people, namely the digital world because when it enters the digital realm it will be able to participate from all regions. There are currently 718 regional languages ​​in Indonesia, but only seven are digitally registered. This year, what has been registered in the web domain is Javanese script and next year it is expected to get Balinese script. Unud will be the key point related to the digitization of Balinese script. The Chairperson of PANDI welcomed this collaboration and hopes that it can be continued with various other collaborations between Udayana University and PANDI.

Unud Receives a Team Visit from the Research Organization...