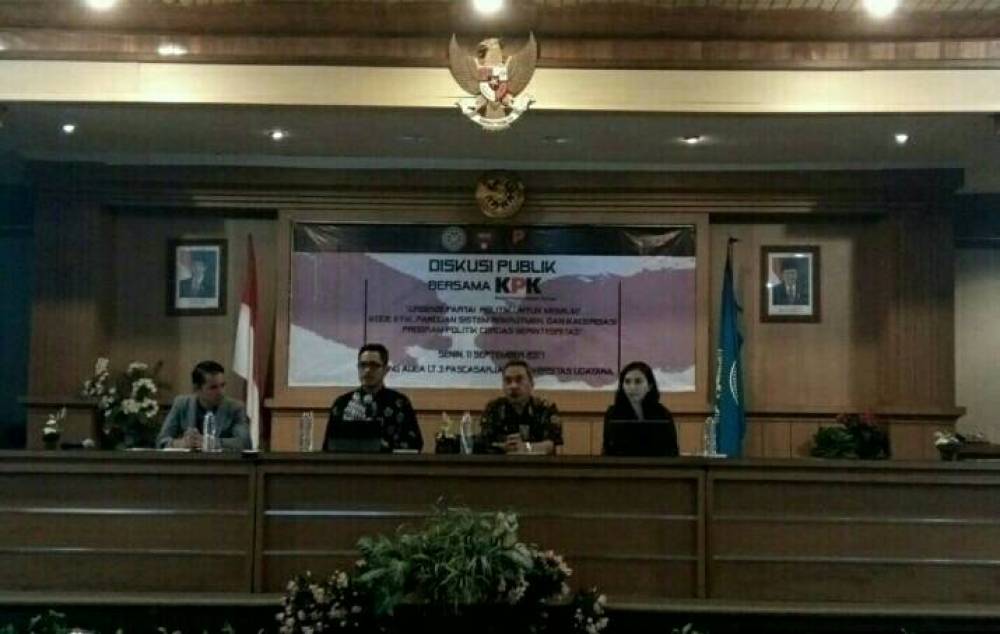 The Atmosphere when Giving Material to Public Discussion Participants in the Graduate Hall, Udayana University

Denpasar, (09/11) Faculty of Social and Political Sciences, Udayana University held a Public Discussion with KPK. The topic was "Political Party Urgency to have Code of Conduct, Guide of Recruitment System and Cadence of Intelligent Integrity Program."

The existence of PCB program is the result of the idea of the Corruption Eradication Commission (KPK). It aims to emphasize the existence of the Code of Ethics and Guidelines of the Recruitment System in order to be adopted by Politicians and Political Parties as well as possible and free from corruption. Furthermore, it can create candidates - Leaders who are smart in politics and high integrity.

"In addition there is an explanation of the code of ethics as a means to maintain attitudes or norms in order to achieve a better social order. Not only politicians and political parties, but also society are required to be intelligent and integrity. "Dewa Ayu Agung Dewi Gili Amritha as the Chief Discussion Officer said.

Public Discussion with KPK is the first time held and intended for public and students who have interest in politics in particular. The Public Discussion that took place this afternoon had attracted 180 participants from among the students. The presence of representatives of political parties in Bali as many as 15 people participated in the discussion.

There is a future plan in the form of discussions among students in the campus as stated in the Intelligent Integrity Policies slogan is "Unceasing Actualization, Unlimited Integrity." (khania)