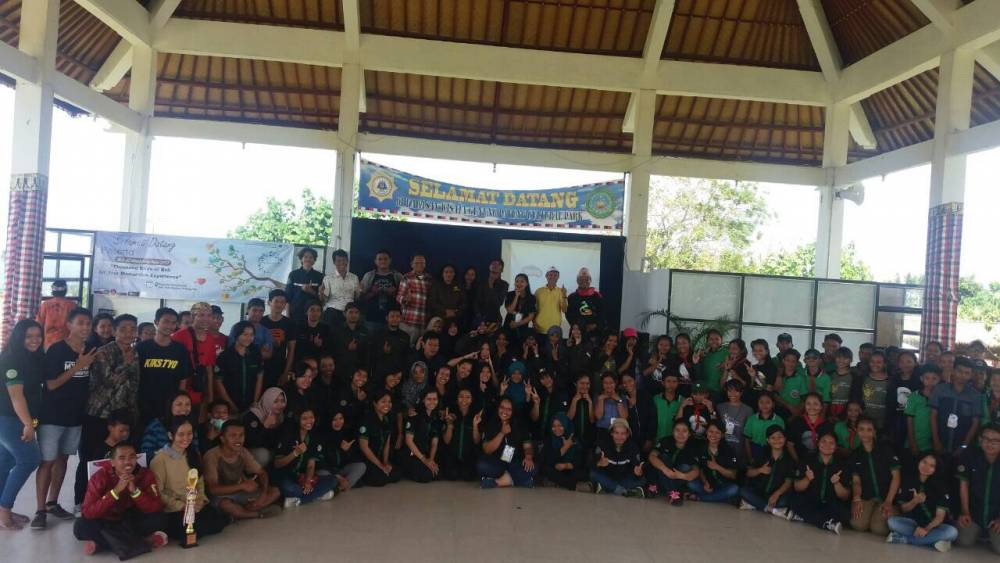 Biology Student Association (Himabio) Udayana held the event entitled 'Bali Birdwatching Race 2017'. This activity is the work program from Himabio itself, and at the same time, this activity was held in order to introduce Udayana Biology and early conservation efforts on wild animals ie birds. This activity was held at Gunung Payung Cultural Park, Kutuh Village, South Kuta, Badung, for three days since Friday (12/05), the opening of this activity was closed on Sunday (14/05). For the success of this event, this BBR activity involves the committee that comes from the students of Biology Study Program, Lecturer in Biology Udayana, Kutuh Village, South Kuta, Gunung Payung Cultural Park Party, Kokokan Bali Bird Watching Group, Frank William Bird Statue Museum Udayana University. And also the committee has done various preparations, such as the selection of the location of the event, the theme and all the event files, invitations to potential participants in several islands in Indonesia such as Java, Sumatra, Bali and Nusa Tenggara

After conducting public lectures and joint observations on Serangan Island on May 6 to 7 in the framework, a series of events celebrating World Bird Migration Day, this time BBR 2017 was held in the form of a race that is divided into two categories. Both categories are bird watching and online photography competition. This bird observation race consists of several assessments; the first is an article about the Bali Starling performed on the first day of the event. With some assessment criteria, such as writing format, word order and count between 400 to 500. Then the second assessment from bird observation, the participants walk with the tracking map that has been made before. On this tracking, the participants are required to describe and sketch birds that have been observed along the tracking path. Then the third appraisal is a quiz given by 2 presenters namely Mr. Sudaryanto about the bird species in Bali and Mr. Syaifudin about the sound of birds that made the second day after tracking. In addition, the assessment is also seen from the liveliness of the team. The percentage of judgments is divided into two, ie for beginners and for higher levels, in order for fair judgments to be equal to the level. For a photography competition conducted online, participants submit a minimum of two photos with one mandatory kingfisher criteria and one free photo, with predefined editing criteria. In the race there is no preliminary round, the assessment is evenly distributed in each race category.

The jury who participated in this competition is, Mr. Sudaryanto who is a lecturer of Biology FMIPA Udayana, Eswaryanti's mother who is representative of Frank Wiilliam Museum Udayana Bird Statue and as a student coach, Mr. Syaifudin who became the representative of the Kokokan Bali bird watcher group. And for the photography competition involves the jury that is Yuyun Yanwar, the father of Willy, and the father of Budi Wildlife Nature of Bali is a wildlife photographer. And in this activity is able to collect participants as many as 21 teams for the category of bird observation, also 14 people for the category of online photography. "Hopefully, through this event so that all stakeholders, both participants, as well as the committee and lecturers and the community more to preserve nature by not shooting birds or confining birds because on the basis of his bird is much more beautiful in nature. In addition, Indonesia is a country with mega biodiversity must be maintained its diversity. The message that everyone wants to convey is not to wait for rare animals to keep animals, losing one animal today may lose many animals tomorrow, "said Laksmi as organizer of BBR 2017. (arisugama)