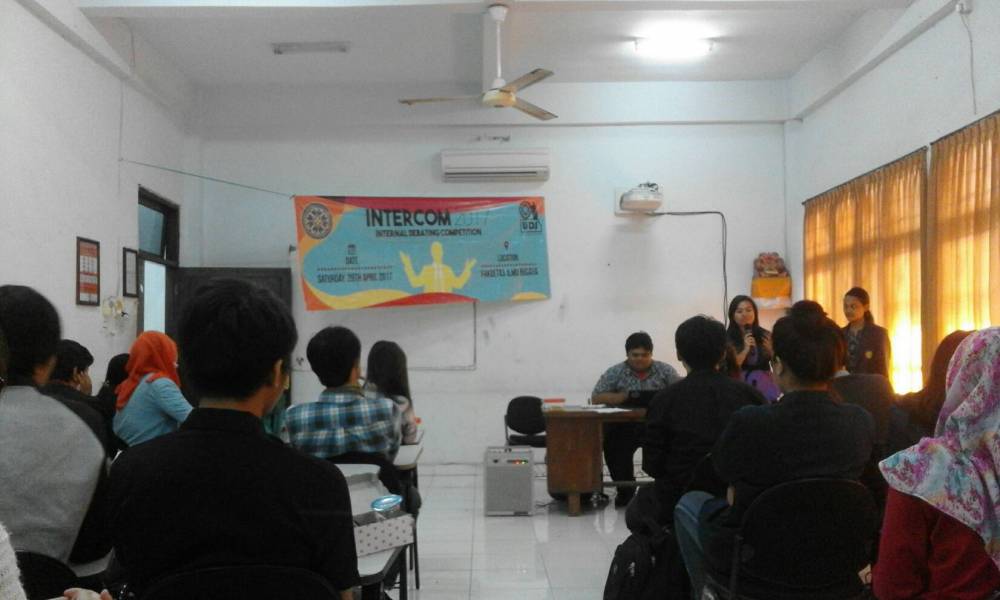 Denpasar, (29/4) Greeting from one of Intercom's organizing committee at Faculty of Arts

A series with the implementation of the work program of Department 1 of the Udayana Debating Society which organizes INTERCOM aimed at the active students of Udayana University. Intercom is an Internal Competition for English language debate with territorial boundaries only as Udayana University. According to Intercom Chief Executive Officer I Made Marta Wijaya explained that the implementation of Intercom aims to find debaters who will follow the NuDC race, one of the university debates contest in Indonesia to represent Udayana.

Intercom took place on April 29, 2017 at Udayana University Faculty of Cultural Sciences from morning to evening. Intercom participants consist of 8 teams consisting of, Faculty of Cultural Sciences sent 3 teams, Faculty of Medicine with 2 teams, Faculty of Agriculture with 1 team, and 1 team from the Faculty of Tourism and 1 mixed team. Intercom is held annually by the 1st Department of UDS in competitions, training and adjudicators that are useful for preparing Udayana University at NuDC and other national and International debate competitions.

"So in addition to getting the top 10 best speakers to join in NuDC, they will also be trained by the best coach debate in Bali for whom - who will be down in NuDC, Joved or Ived later." Marta Wijaya said. In this year Intercom using the British Parliamentary system is a team consisting of only 2 people and face against three other teams, so in one room there are 4 teams that compete.

There are three preliminary rounds of 16 participants by selecting 4 best speakers that will be a priority at NuDC. The 4 names chosen are from the Faculty of Arts on behalf of Wahyu Widiatmika, Surya Saputra, Widiadnyana and one name from the Faculty of Medicine, Shakthy Thewi. The topic behind the contest is not specially but rather the latest issues that are happening.(arisugama)