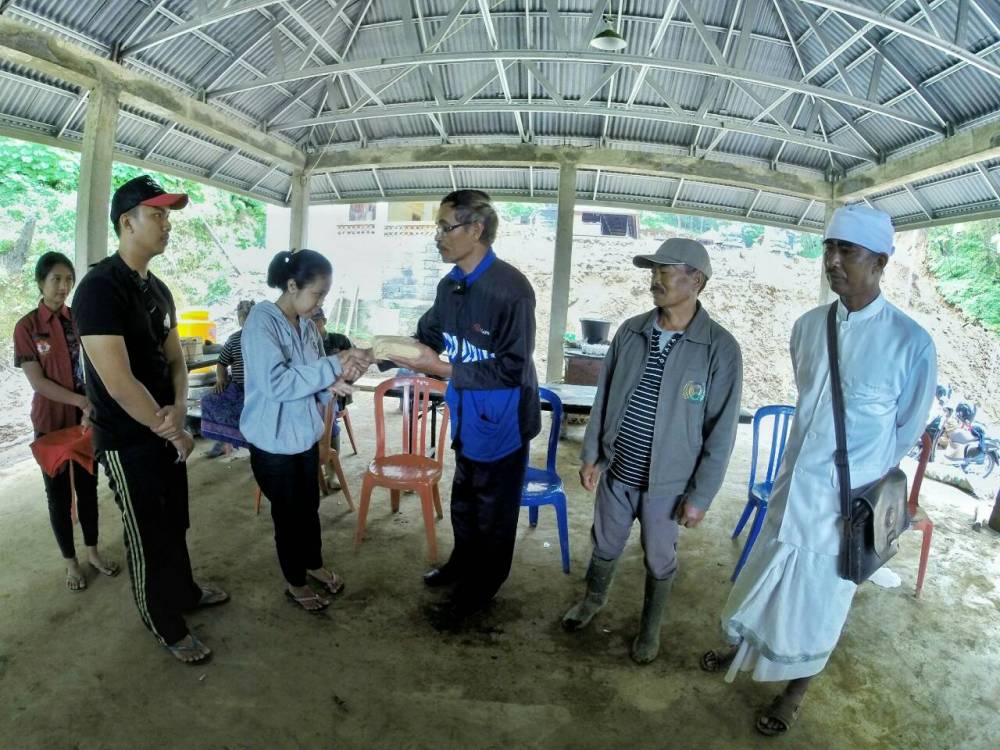 Tabanan – Bali, as a Hindu-based organization in Udayana University, Forum of Hindu Students (FPMHD) of Udayana University showed their caring attitude toward the disaster that had happened in Tratai Bang temple, Candikuning village, Baturiti, Tabanan. This caring attitude was realized by social service and giving of dana punia (the holy giving in Hinduism belief). The social service and giving of dana punia were held on Thursday, January 12. Dana punia was obtained from the fund-raising action that had been done before the social activity. It was opened on December 27, 2016, and ended on January 10, 2017. From the time range that had been determined, the amount of the collected funds was 30 million.

Contacted by telephone, Chairperson of the actions of social service and giving of dana punia, Ni Wayan Dewi Savitri, said that the aims of these actions were purely to participate and help in rebuilding the Tratai Bang temple that was hit by flood, as well as to introduce FPMHD of Udayana University to the community.

The social service in the Tratai Bang temple was preceded by prayer. Then, it was continued by clean-up activities in the temple area. After that, the last activity conducted was the giving of dana punia by FPMHD, which was obtained from the fund-raising action. It ended at 1 p.m.

The Chairperson of this activity, Dewi Savitri, expected that the actions of social service and giving of dana punia can be beneficial in rebuilding the Tratai Bang temple. She also expected that the people who have donated (mepunia) will get the happiness.

“Hopefully, dharma (goodness) of people who have done the dana punia will get the happiness, and Hindus can be more united, as well as FPMHD can be known by Hindu community in Bali” she said.

Tratai Bang temple located in the area of Eka Karya Botanical Garden Bedugul, Baturiti, is one of the temples destroyed by flood, which hit the area of Bedugul, on Wednesday night, December 21.

The temple, which is included in Dhang Khayangan temple, was hit by the landslide and flood from the Pohen hill located above it. As a result, most of shrines (pelinggih) from nista, madya, and utama mandala were leveled to the ground.

Therefore, the concern of the people is needed to rebuild the Tratai Bang temple, which is included in Dhang Khayangan temple. (naristadevi)