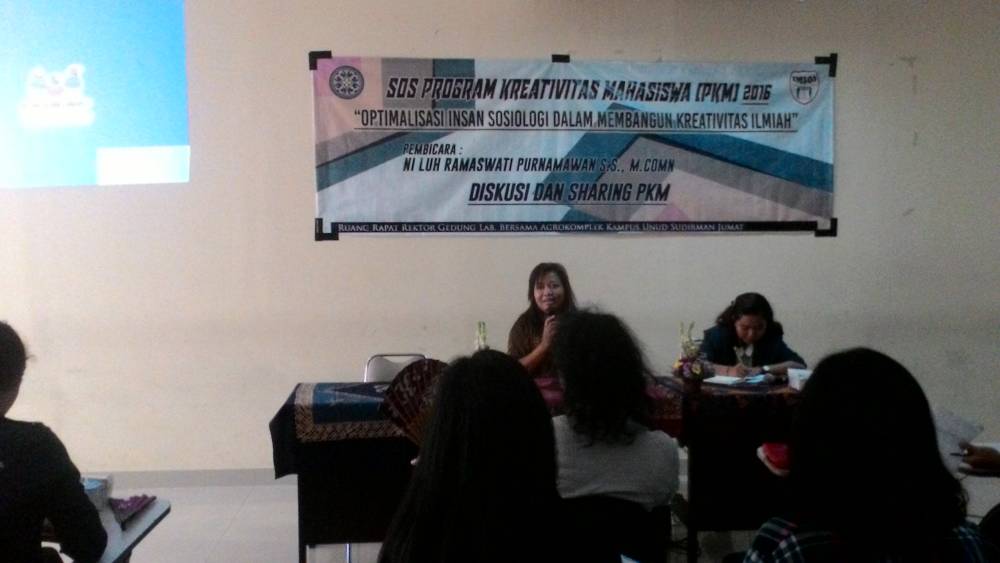 This SOS PKM discussion aimed to optimize what had been achieved by the previous generations about PKM. Besides, the minimum number of students had sent PKM proposal, so that it needs to be optimized by holding this discussion.

“SOS is Sociology students’ event, it also means ‘emergency’. We, Faculty of Social and Political Sciences students, can be said ‘emergency’ in PKM because there are the minimum number of students who propose PKM proposal”, the chairman of this event, Jordy, stated in his speech.

The Vice Dean III Faculty of Social and Political Sciences, Tedy Arianto, also felt embarrassed when he was equipped with humaniora sciences group in Udayana. It was because the winner of PKM in social humaniora science on National Students Scientific Week (PIMNAS) a year ago came from UGM which was about Megibung is as the reconciliation tool between Muslims and Hindus.

“What I have been stated is a challenge for you, why the theme in Bali is proposed by UGM and becomes the winner”

The speaker was Ni Luh Rasmawati Purnawan S.S., M.COMN. This speaker discussed about students creativity program. The introduction about PKM until kind of successful PKM at Pimnas were discussed clearly. Besides, the speaker gave ideas to the participants if they would like to join PKM.

The participants attended at Agrokompleks building which was prepared by the committees. Furthermore, this event was one of the initiation events for the new Sociology students.

“Initiation is not about bullying, but creating something new such as PKM proposal that will be proposed”, Dharma, the chairman of Sociology Students’ Association Udayana stated. (manik)