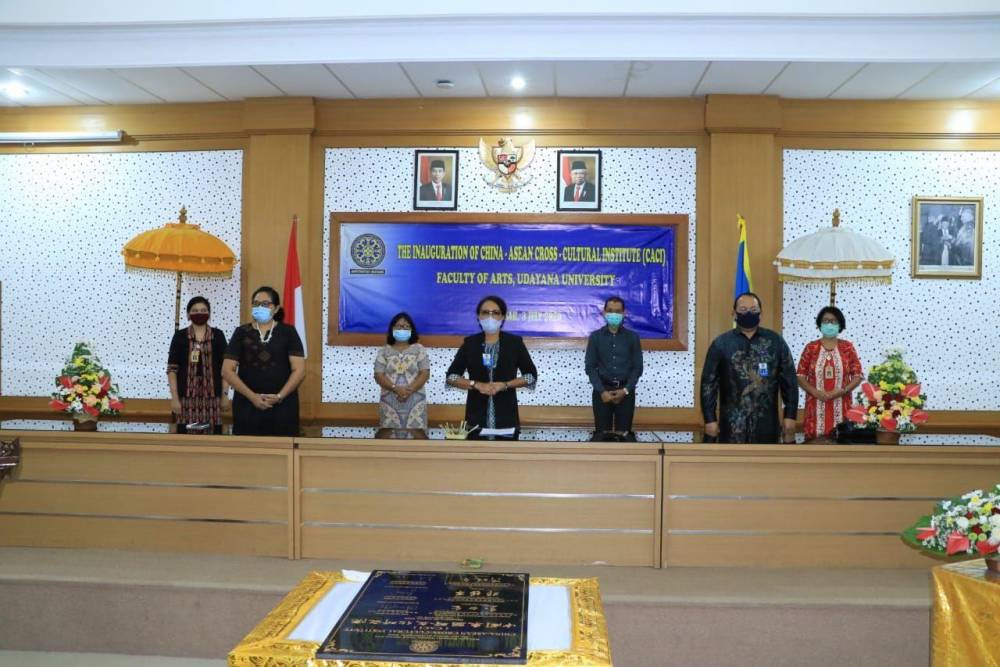 The inscription signing was attended by the Chancellor of Udayana University, Deputy Chancellor for Planning, Cooperation and Information, Head of BAKH, and the Dean of the Faculty of Cultural Sciences along with the related staff. Representatives from the People's Republic of China along with other invitations attended the series of online CACI inauguration events.

Dean of the Faculty of Cultural Sciences, Dr. Made Sri Satyawati, S.S., M.Hum., In her remarks expressed her gratitude for the formation of CACI and the facilities that had been prepared for the needs of the CACI office. Likewise, assistance from representatives of  Chinese People's Government to prepare comfortable classrooms, handbooks to learn Chinese language and culture. "We hope that in the future Chinese government can also provide scholarships to students who want to learn Chinese language and culture, so that the Faculty of Cultural Sciences can also prepare to form the Chinese Language Study Program," said Dr. Satyawati.

Meanwhile, Mrs. Jian Qin as Advisor to the Chinese Minister of Mission for ASEAN, expressed his happiness because finally the collaboration program between Udayana University and the Government of the People's Republic of China could continue even further through the inauguration of CACI. Mrs. Jian Qin revealed that relations between China and ASEAN, especially Indonesia, have been established since the royal period, and the relationship continues to be even tighter on this occasion. "I hope this CACI will become a medium for joint research and empowerment of human resources on both sides," said Mrs. Jian Qin.

Consulate General of People's Republic of China in Denpasar represented by Plt. KJRRT. Mr. Chen Wei also expressed his happiness by the establishment of CACI. Although serving as Acting. KJRRT, Mr. Chen Wei had followed the previous MoU between the Government of the People's Republic of China, Udayana University and Beijing University which had been conducted since 2019. Mr. Chen Wei also mentioned that relations between China and Indonesia have long existed. "Consul General will seriously commit to continue to support the development of CACI, hopefully various planned activities can be achieved at the right time and produce something positive," said Mr. Chen Wei.

Chancellor of Udayana University, Prof. Dr.dr. A A. Raka Sudewi, Sp.S (K), in her remarks expressed her gratitude to the Consul General of the People's Republic of China in the previous period Mr. Gou Haodong who has completed his assignment in Bali and has facilitated many forms of cooperation. "To the Ambassador of the People's Republic of China to ASEAN, the Chinese Consul General in Denpasar, and the Center for Cross Cultural Studies of Beijing University, we hope that the existence of this Institute can continue to be supported and assisted in the implementation of programs that have been initiated by its founders," said Prof. . Raka Sudewi.

Through the establishment of this institute, there are opportunities for Udayana University to carry out various technical activities with various universities in China and ASEAN. Such cooperation can be in the form of joint research, cultural exchanges, conducting language training, conferences and joint seminars and other collaborations.

Udayana University in collaboration with the Consulate...