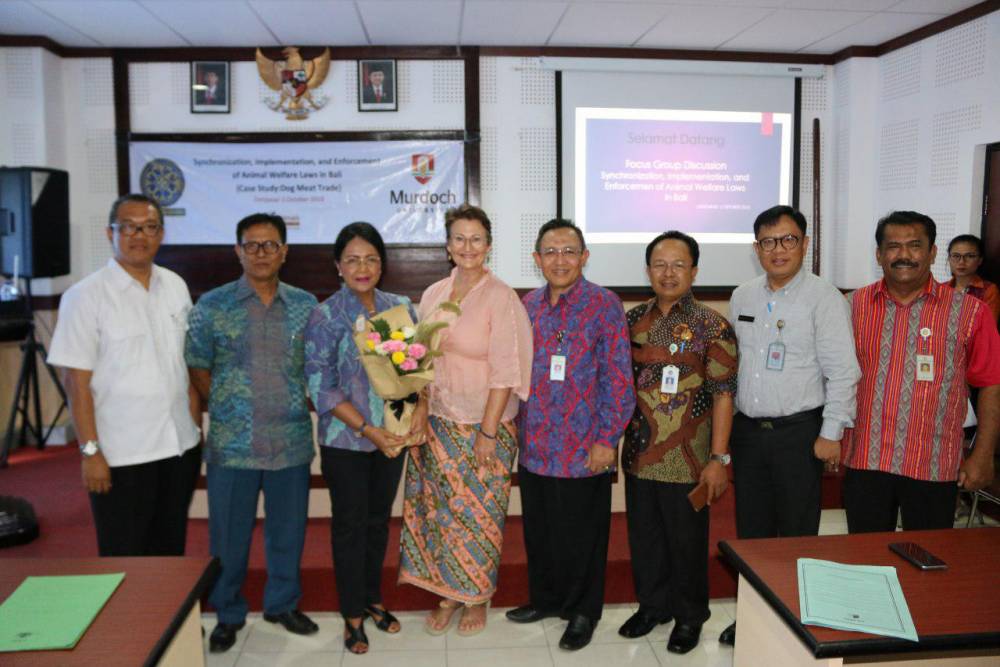 Denpasar - Chancellor of Unud, Prof. AA Raka Sudewi opened the FGD Synchronization, Implementation and Enforcement of Animal Welfare Law in Bali, Tuesday, October 2, 2018. This FGD was held in collaboration with FKH Unud, Murdoch University and Animals International aimed at synchronizing the views of the law that regulates animal welfare and clarifying work flow in the implementation and enforcement in the community. The FGD was attended by representatives of the Prosecutor's Office, the Police Department, the Livestock Service Office, Satpol PP, BPOM, BPBD, PDHI, PHDI, MUDP by presenting the keynote speaker the Director of Veterinary Public Health of the Ministry of Agriculture, Syamsul Ma'arif.

This FGD activity is a follow-up to the recommendations of the national animal welfare coordination meeting in Bogor on 1 - 3 August 2018. This FGD is categorized as an issue of animal welfare which has become an important discussion for various community groups, not only labeled animal lovers but also the general public and international. It cannot be denied that this topic has attracted the attention of many parties who then encouraged the Indonesian government not to override this issue. The spotlight on animal welfare in Indonesia comes from various parties, especially the international community, who have first paid high attention to animal welfare.

The Indonesian government's appeal on this matter emerged from various angles, one of which was so highlighted was the consumption of dog meat carried out in several regions in Indonesia. In Bali alone, dog meat trade is still rife, and this is very contrary to the culture of Balinese people who do not consume dog meat.

In addition to the issue of dog meat trade, there are still many animal welfare violations that escape from the law because there is no clear flow of legal references. Every treatment involving animals, including dogs must be based on animal welfare principles which include comfort, freedom from pain and illness, freedom from hunger and thirst, freedom from fear and limiting their natural behavior.

Chancellor of Unud, Prof. A.A Raka Sudewi in his speech expressed his appreciation for the implementation of this activity. The Chancellor also said that the trade in animal meat such as dogs in Bali needs to be given attention given the many human health problems originating from animals such as rabies which spread through dogs. Rabies has so far claimed many lives due to the bite of dogs infected with the virus. At present the device that regulates the matter already exists but needs to be strengthened in the emphasis of the rules and needs to be further socialized so that animal welfare can be achieved. In the future the use of antibiotics from animals also need special attention so that they do not cause adverse effects on humans. (HM)