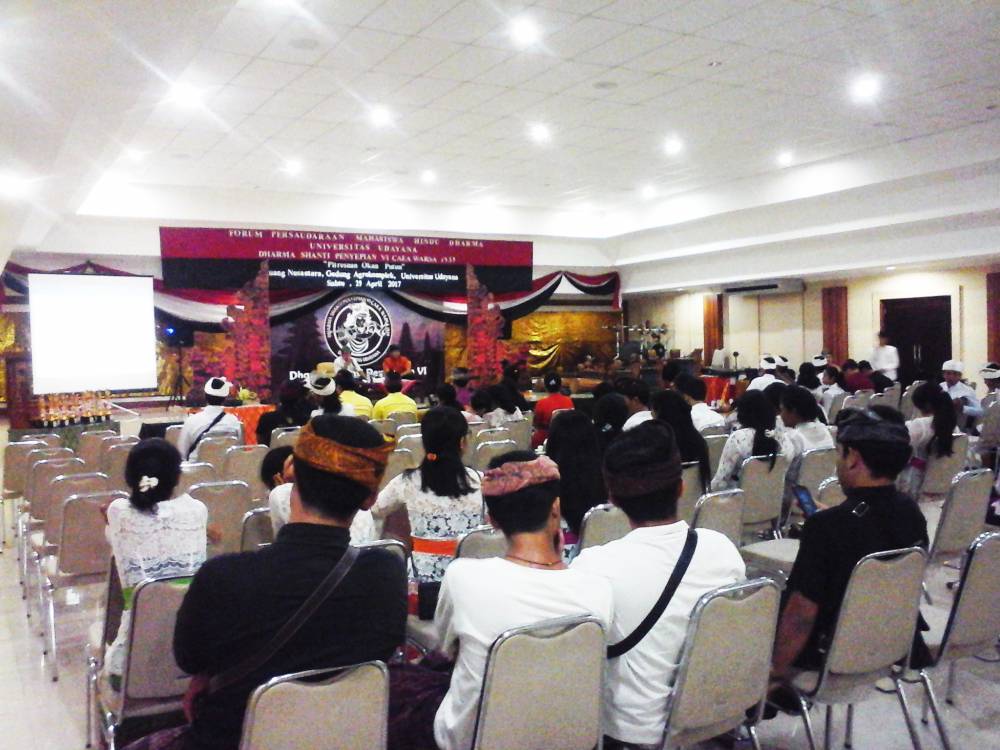 Drs. I Gusti Ngurah Bagus Mataram, M.Si. as the Head of Welfare Section of Denpasar City Became the Speaker in the Peak Event of Dharma Shanti Penyepian 2017

The registration was held since 15.30 WITA and the activity started at 16.00 WITA. The series of activities on this day began with the opening and report of the committee chairman as well as several remarks. The coordinator of FPMHD UNUD and the advisory council ofFPMHD UNUD gave their speeches. Then Dr. I Nyoman Suyatna, SH., MH. as the Vice Rector III of Udayana University gave a speech while officially opening the event.

The activity continued with the dharmatula filled by Drs. I Gusti Ngurah Bagus Mataram, M.Si. as the Head of Section of Welfare of Setda Denpasar. He replaced the mayor of Denpasar who was unable to attend on this occasion. In the dharmatula, it discussed the history of Balinese culture and what things must be done by the present generation to keep the cultural heritage of the ancestors. This is in accordance with the theme of Dharma Shanti Penyepian that carried by the committee. Some guest stars in the night peak of Dharma Shanti Penyepian were One Ethnic, Teater Kaki Lima Denpasar, and Sekar (Seniman Kahuripan). Parasugeni from the engineering faculty became the musk accompanist in this activity.

Ni Ketut Supadiati as the chairman of the committee in this activity claimed to have many lessons. One of them was able to learn how to lead. "I hope for next year, this event can be improved again related to everything. Hopefully also, there are more participants to preserve our culture", he said. (mimi)