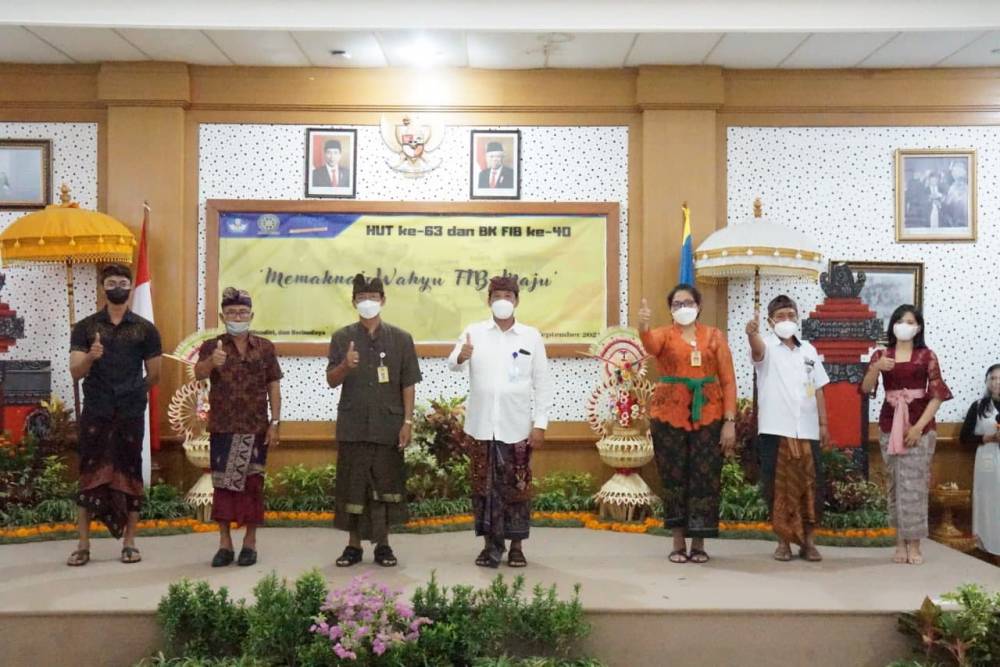 The Faculty of Humanities of Udayana University will hold a celebration of the 63rd Anniversary and the 40th BKFIB in 2021 with the theme "Meaning the Revelation of FIB Forward" which will be held online and offline, Thursday (30/9/2021). Also attending the celebration were the Rector of Udayana University, Chair of the FIB Senate, the Dean and Vices Deans of FIB, Coordinators and Sub Coordinators within the FIB environment, Representatives of BEM PM and Chair of the FIB Student Senate. 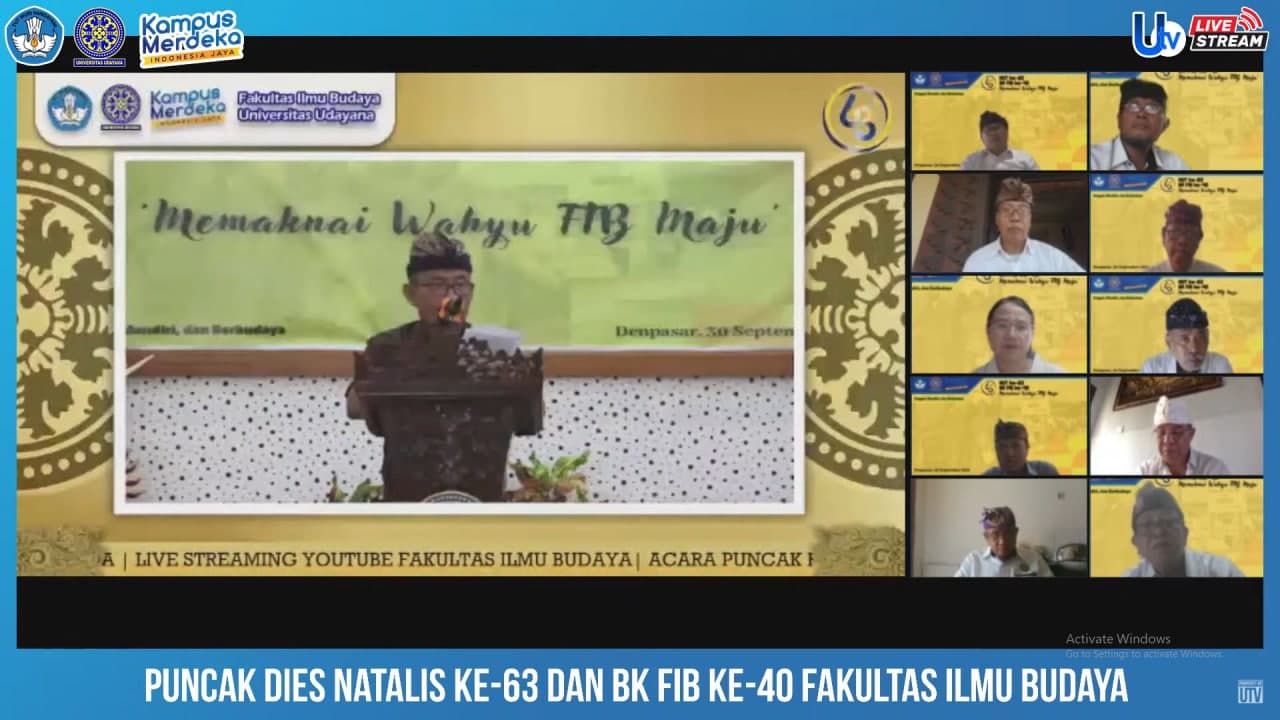 Dr. Putu Sutama, MS as the Chair of the Committee said that this year's Anniversary was carried out with various activities including community service by targeting secondary schools, both SMA and SMK spread throughout Bali through online activities, making regular pilgrimages to the existing Mr. Roelof Goris hero park. at Bukit Jimbaran, Virtual Flag Apple, Scientific Orations, seminars and alumni gatherings, book launches and book reviews made by FIB lecturers as well as public lectures for new S2 and S3 students. The chairman of the committee hopes that in the leadership of the new Chancellor of the Faculty of Cultural Sciences, he will get an award leading to a unit that is able to compete both internally and externally. 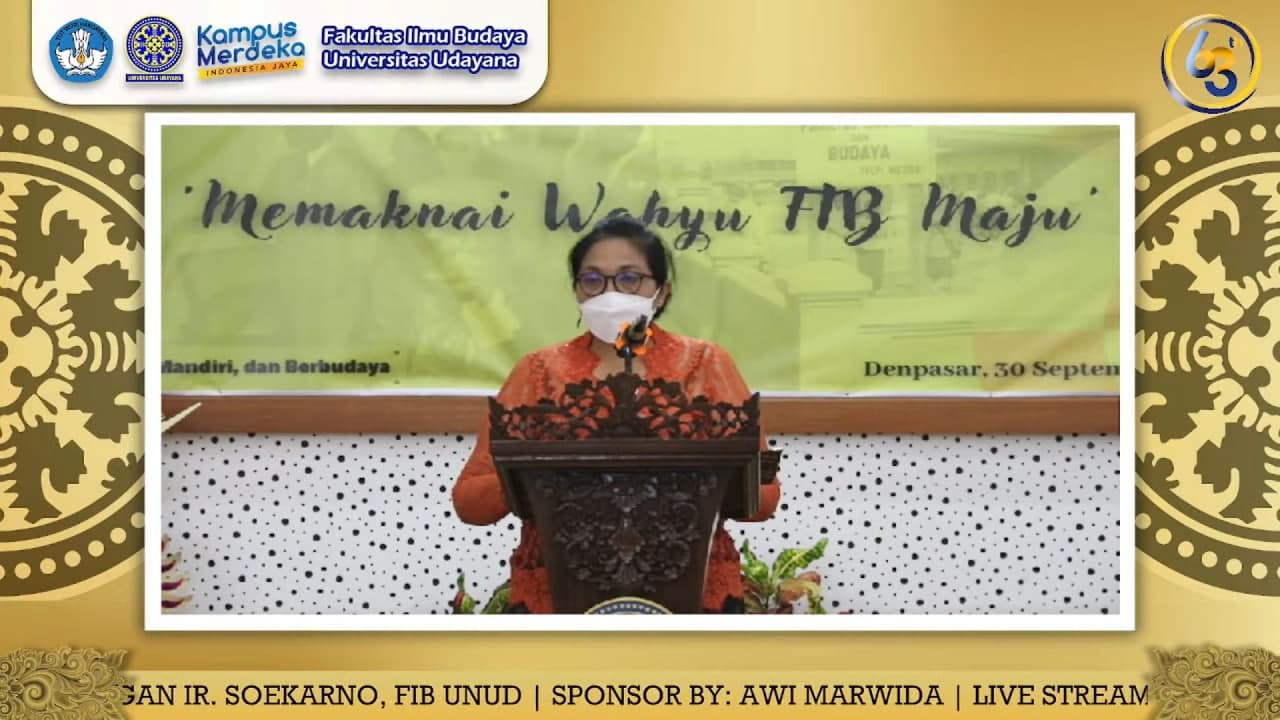 Meanwhile, the Dean of the Faculty of Humanities, Dr. Made Sri Satyawati, SS., M.Hum said that the Faculty of Cultural Sciences (FIB) of Udayana University is the oldest faculty which is the forerunner of Udayana University. The programs that were born at Udayana University all started from the Faculty of Cultural Sciences of Unud, whether they were Bachelor, Master or Doctoral programs. FIB Unud is a faculty that manages two types of study programs, namely language and culture, all activities planned and carried out are all related activities based on these two things, so that all management carried out at FCS is based on the policies of the Ministry and the Chancellor of Unud both related to academics, human and financial resources.

Through this year's theme, it is hoped that FIB should be interpreted as a campus of people's revelation to make the Faculty of Cultural Sciences more advanced. The Dean also conveyed that the process of submitting cultural heritage carried out by FIB had received a recommendation to become a cultural heritage at the provincial city level. It is hoped that later new students can be escorted in their educational process and their achievements in academic and non-academic fields, so that the process goes well. Good output also greatly affects the performance of the faculty and of course also the university. In addition, students in carrying out education at FCS are also responsible for the content of the learning process, so they are expected to be able to conduct research that can enrich lecture materials and research that can be dedicated to the community. 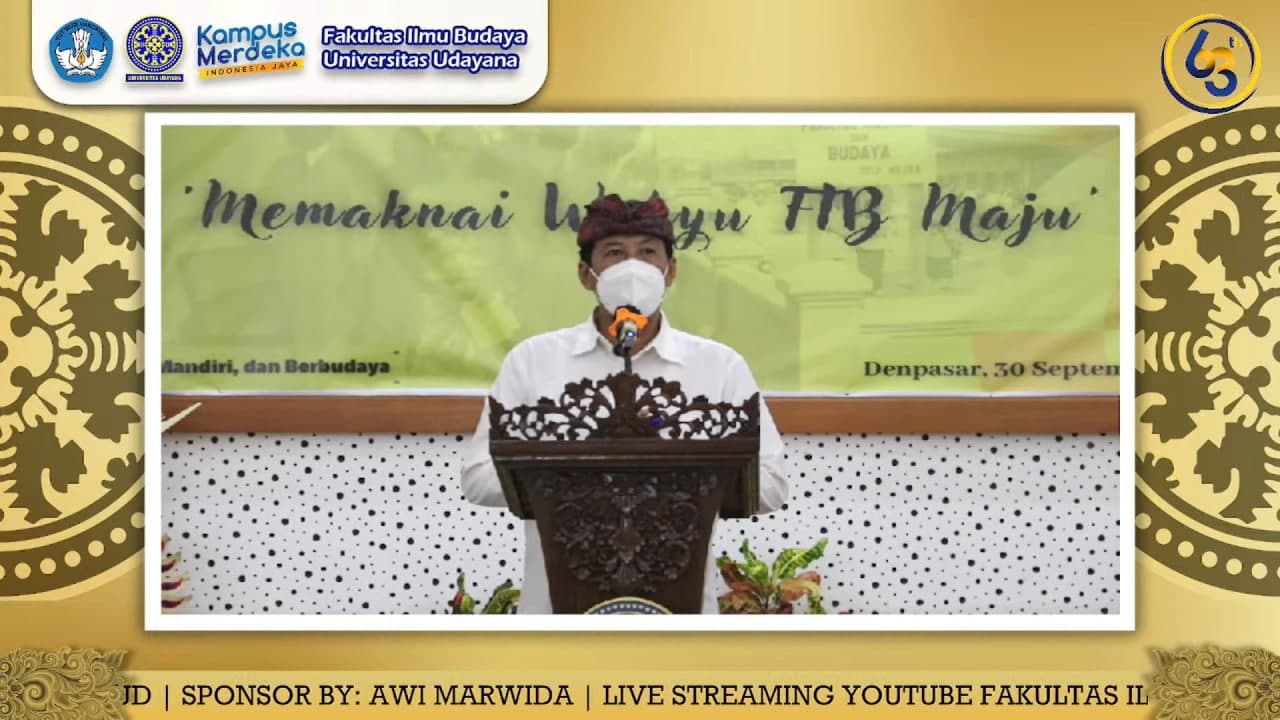 While the Rector of Unud Prof. I Nyoman Gde Antara in his speech congratulated the celebration of the 63rd Anniversary and the 40th BKFIB in 2021. As the oldest faculty in Unud, the existence of the Faculty of Cultural Sciences is very important because it has produced many alumni who have occupied important roles in society, not only in Bali, but also in Indonesia and abroad. The Rector also conveyed various university targets that will be implemented, and to achieve this, cooperation from all parties is needed. For this reason, the Faculty of Cultural Sciences is expected to be able to support the various programs in question through improving performance. His party also said that he had plans for the construction of several Dean buildings, the development of student dormitories and lecture buildings on the Jimbaran Campus which are expected to change the face of Unud in the future. 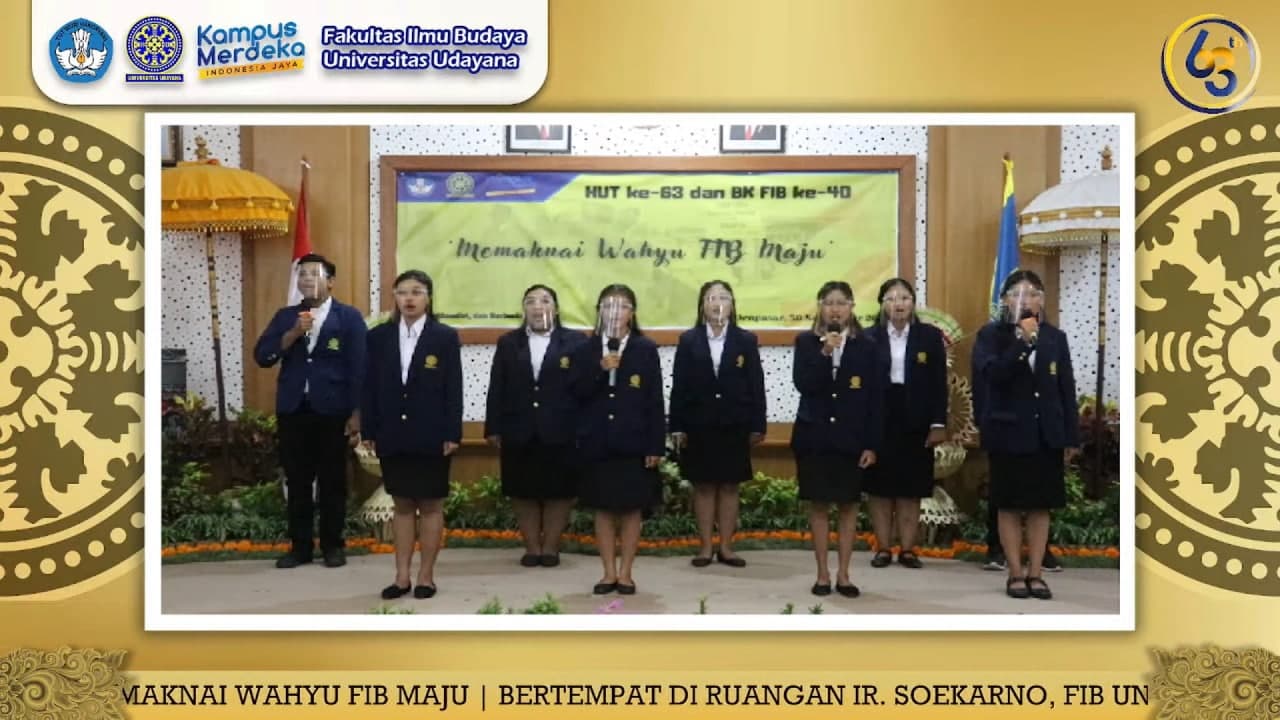 The peak of the anniversary celebration was marked by cutting the cone and playing a congratulatory video, the appearance of the Simponi UKM and the awarding of outstanding students of the Faculty of Cultural Sciences, Udayana University in 2021.