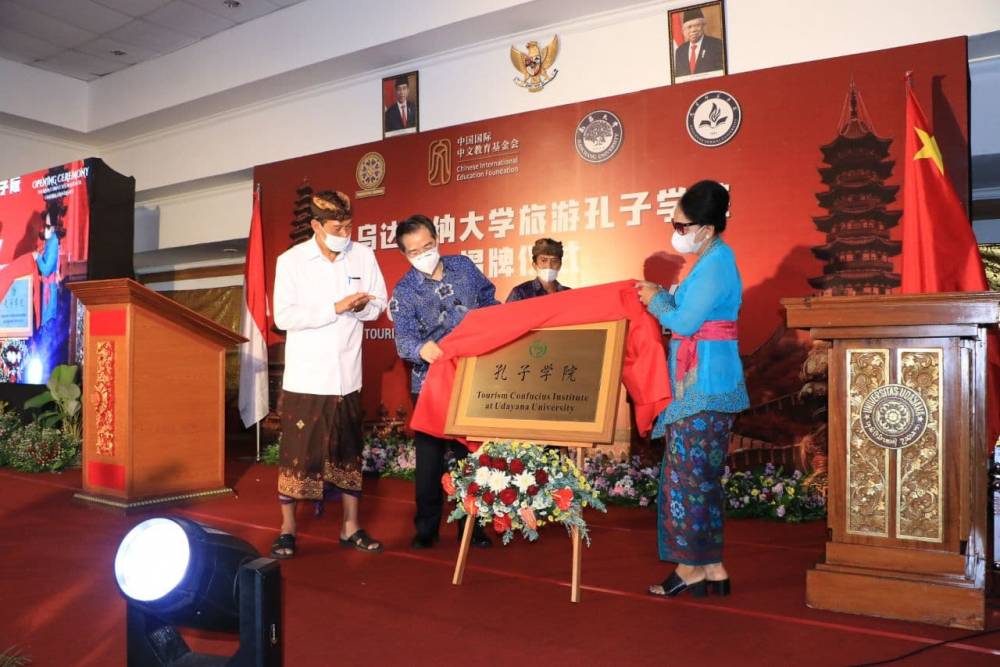 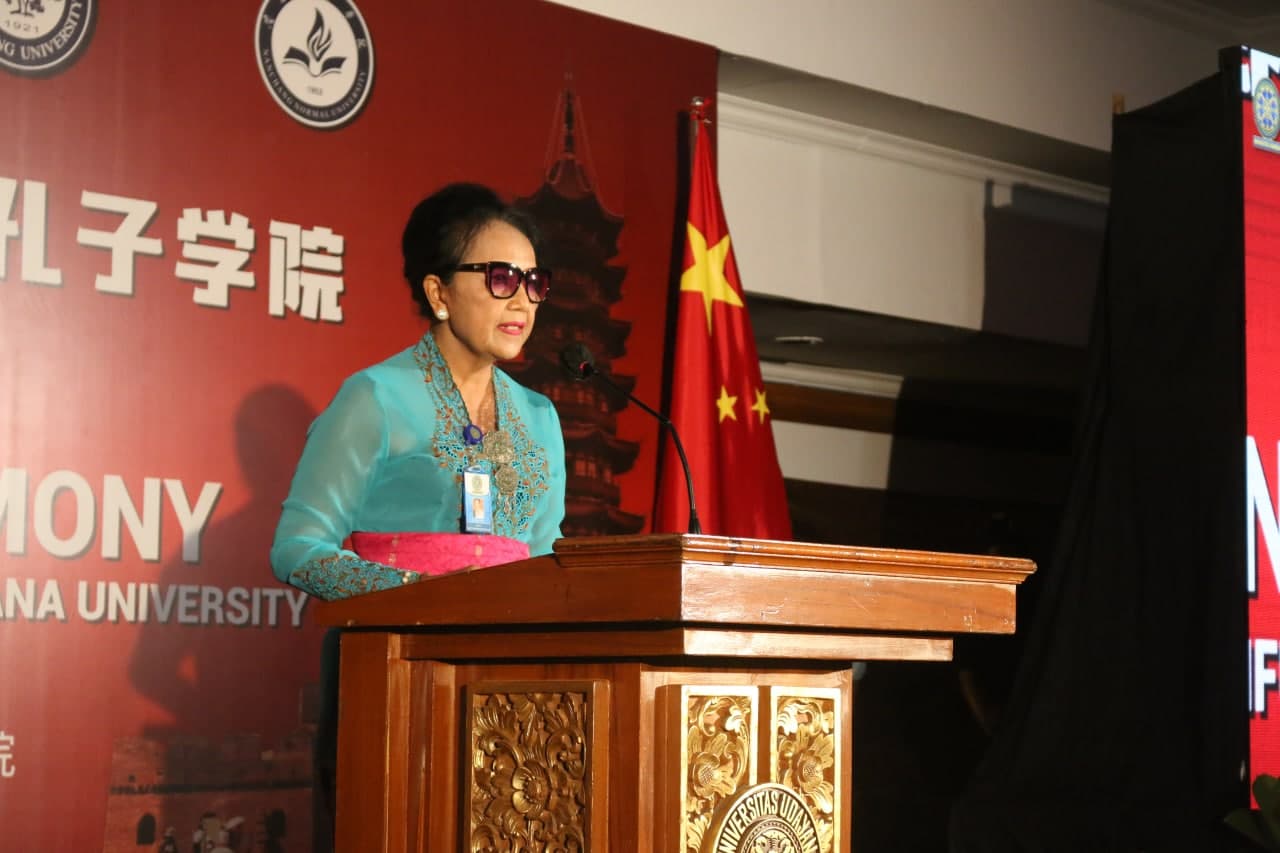 Rector of Unud Prof. A.A Raka Sudewi in his speech conveyed that in the era of globalization, the main challenge faced by mankind is how to increase cross-cultural understanding between nations in the world. One of the ways to promote understanding and friendship among the countries of the world is cross-cultural exchange and cooperation. Through dialogue, we will deepen the sense of tolerance between countries in the fields of politics, economy, culture, language and tourism. To answer this challenge, Udayana University has signed an MoU between Hanban as the Confucius Institute Headquarters in Beijing-China and Udayana University in Indonesia for the establishment of the Tourism Confucius Institute (TCI) at Udayana University on December 10, 2019. 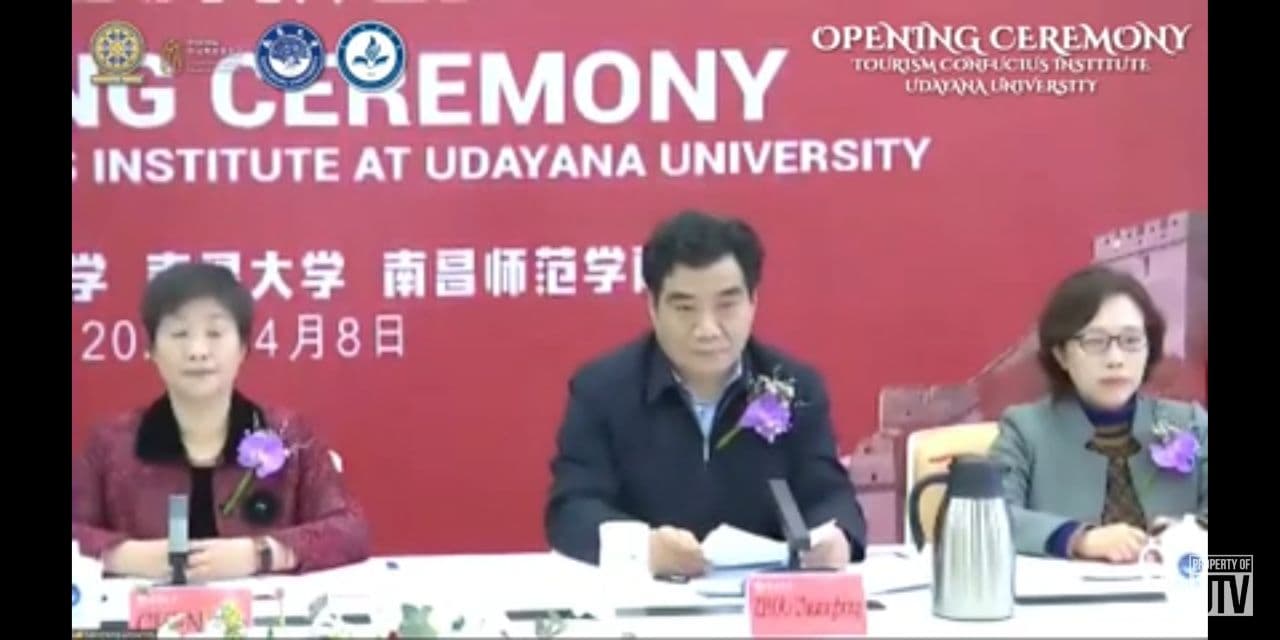 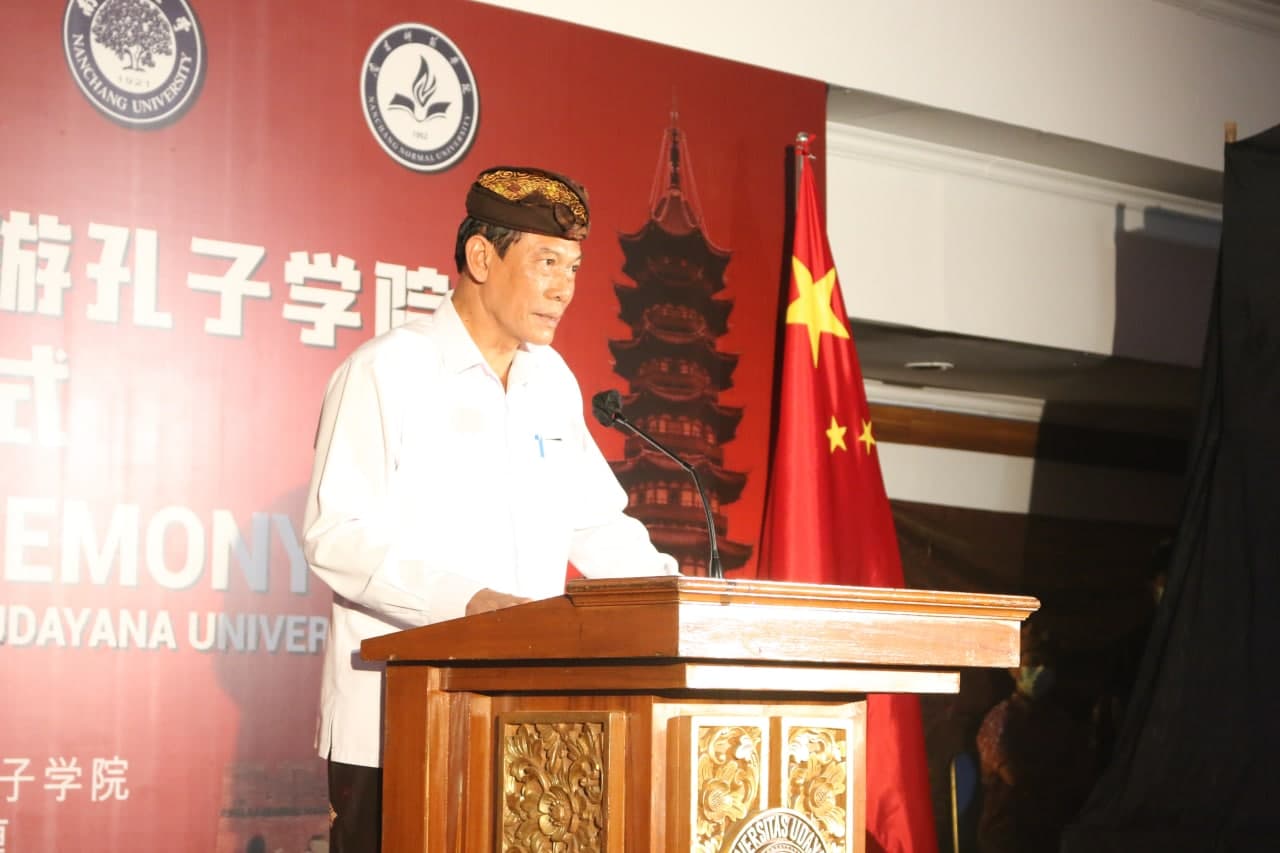 Meanwhile, the Deputy Governor of Bali in his remarks read by Assistant I of the Bali Provincial Secretariat I Gede Indra Dewa Putra, S.E., M.M. welcomes the implementation of this event, because with this an education-based institution has been inaugurated as a result of the collaboration between Udayana University and Nanchang University and Nanchang Nomo University, which will certainly be a place to learn Mandarin, get to know Chinese culture, economic progress, tourism, and so on. etc. The Deputy Governor also highly appreciates the inauguration of the Udayana University Tourism Confucius Institute (TCI), and hopes that the planned programs and activities can run immediately, because during this pandemic it is very appropriate to fill oneself by increasing knowledge and increasing one's capabilities, so that when tourism in Bali re-opened, we are better equipped with quality and professional human resources to welcome tourists from China in particular. 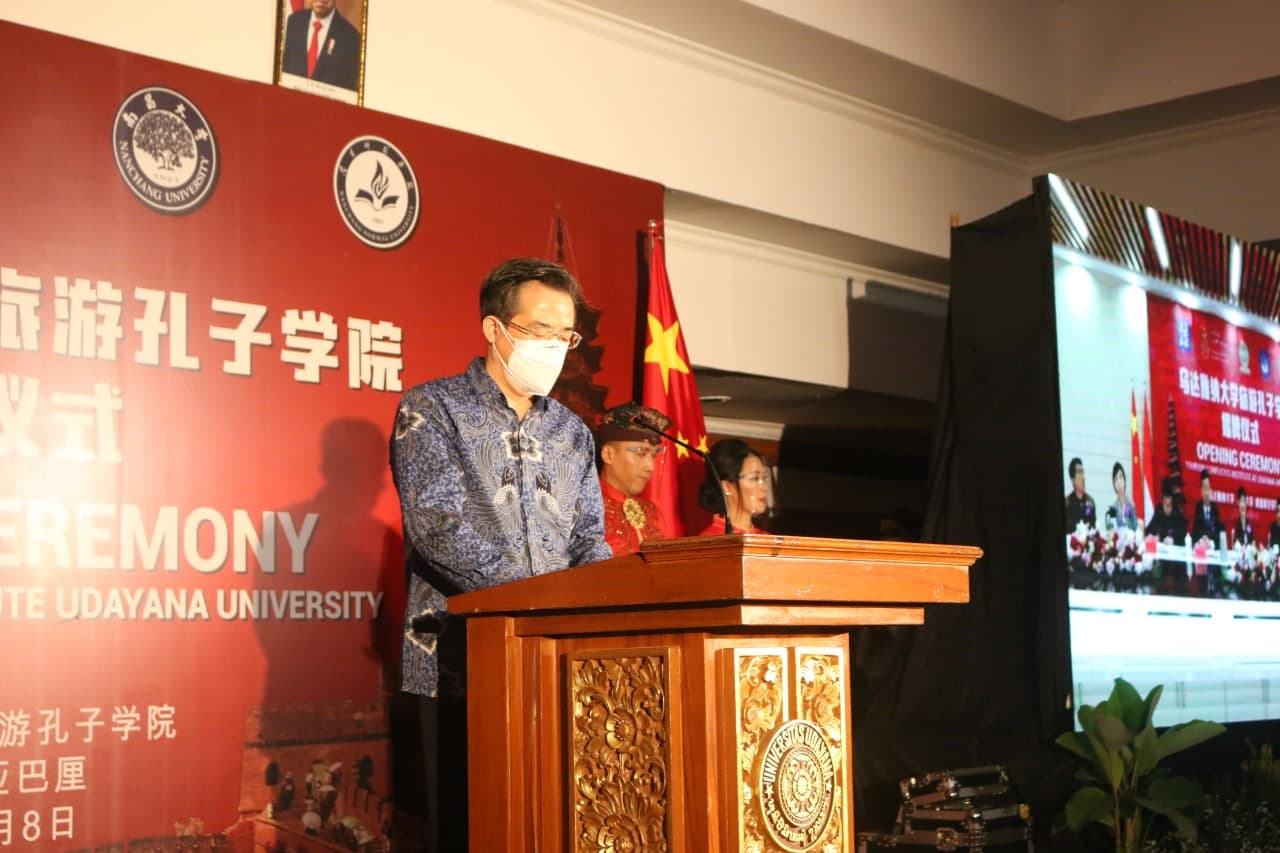 The Chinese Consul General in Denpasar, Zhu Xinglong, said that the University as a center for studying knowledge and human resource development has an important role in the economic development of a country, language is also a cultural representative, a bridge of communication and a link between nations. The consul supports young Indonesians to learn Chinese and understand Chinese culture and supports the universities of the two countries to make the language to foster more cultural exchanges between China and Indonesia. More than 10 thousand Indonesian students have studied in China and it is the second largest study destination for Indonesia. Cooperation to establish TCI is the right thing and this is the eighth and first on the theme of tourism. The Consul hopes that TCI Unud will open a window for Indonesian students, especially Balinese, to understand the culture of Chinese society and become a leading Confucius Institute and contribute to the economy of the local community. 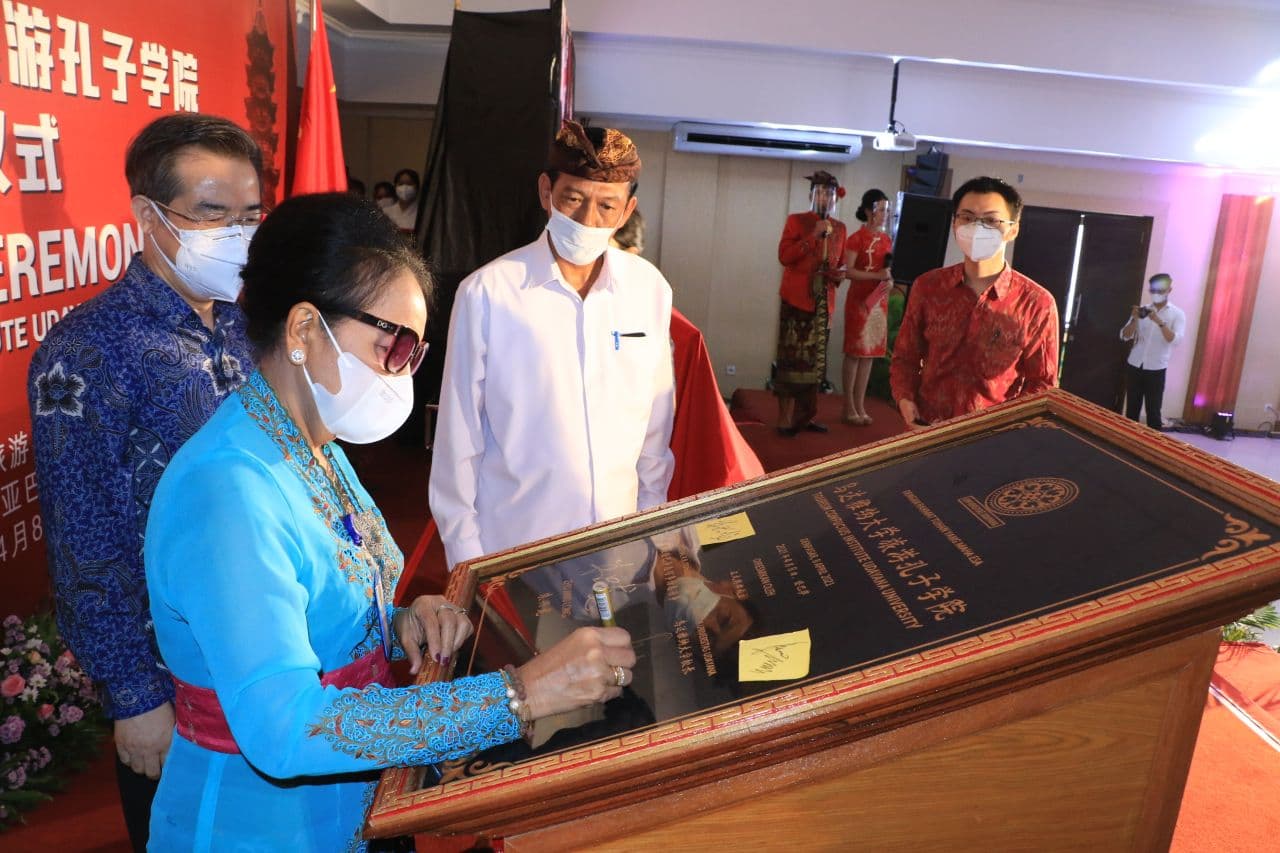