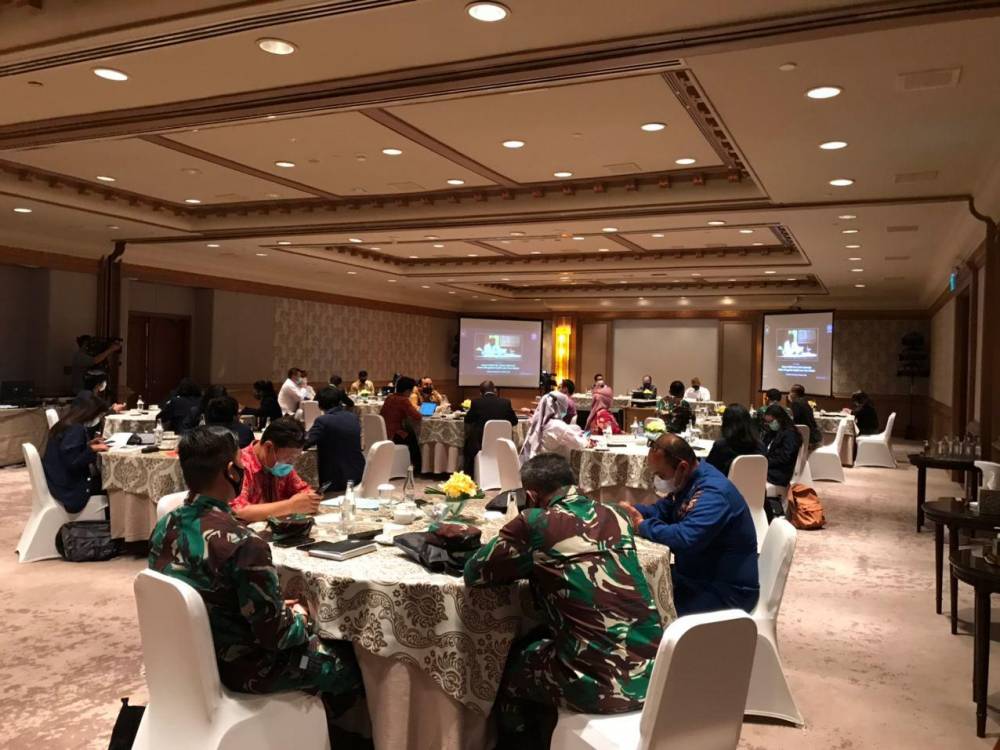 The Coordinating Ministry for Political, Legal and Security Affairs of the Republic of Indonesia through Deputy Bidkoor Pollugri in collaboration with Udayana University held a Focus Group Discussion (FGD) with the theme "ASEAN Efforts and Indonesia's Position in Managing South China Sea Conflict". This FGD aims to harmonize understanding and get input / views from academics, practitioners and related stakeholders on the development of the situation in the South China Sea (SCS) and efforts to manage conflicts and maintain regional stability within the framework of ASEAN cooperation both during and after the COVID pandemic. -19. FGDs were held both online and offline by implementing the Covid-19 prevention protocol which took place at the Intercontinental Jimbaran Hotel, Thursday (22/10/2020).

The FGD began with a general presentation from Ambassador Lutfi Rauf, the Deputy for Foreign Policy Coordination, the Coordinating Ministry for Political, Legal and Security Affairs, who said that today's activity was one of the duties and functions of the Coordinating Ministry for Political, Legal and Security Affairs as the person in charge of the ASEAN National Secretariat, especially for the Pillars. ASEAN Politics and Security. In terms of carrying out this function, of course, one of the ways to do this is how to socialize ASEAN, how can ASEAN be better understood by stakeholders, so that ASEAN is not impressed as just a matter of the government because ASEAN is now a community that involves three pillars namely Politics, Economy and Socio-Culture. One of the topics that are considered very relevant and appropriate for us to discuss together in the midst of the COVID-19 pandemic is the dynamics and security challenges that occur in the South China Sea region. Through this activity, we can see how Indonesia's role in ASEAN is to maintain stability and peace in the Southeast Asian region. Thus, we certainly hope that this event can be used as a forum and forum for discussion to deepen knowledge and seek strategic steps for strengthening strategies, strengthening policies, and strengthening programs regarding efforts to overcome problems faced in the South China Sea.

Present representing the Rector of Udayana University, Vice Rector for Planning, Cooperation and Information, Prof. IB Wyasa Putra. In his remarks, the Vice Rector expressed his appreciation for the opportunity given to Udayana University in organizing this FGD. "We are aware that territorial integrity is a fundamental requirement for the existence of a country according to the preamble of the 1945 Constitution which places a mandate on the Government of the Republic of Indonesia to protect all nations and all spilled Indonesian blood, which means that it is the main obligation for state government to put security. and territorial integrity as the top priority for government affairs ”.

This matter is important and strategic for two things, namely the security of the state and the natural resources contained therein, both of which have important and strategic positions and functions for the development and progress of every nation. The South China Sea as part of the high seas which includes the interests of various ASEAN countries and side by side with the territorial sea unit of Indonesia is a part of the sea that needs special attention, even though Indonesia is not a party to the conflict, but Indonesia's historical role in international relations in mediating international conflict sharing directly or indirectly in contact with Indonesian interests, including therein. Prepare a good negotiation instrument included in it. Single Draff Negotiating Text of Code of Conduct for Parties in the South China Sea which was shown to the SDNT COC Indonesia negotiating team, especially regarding the management of SCS conflicts is another very important part of the accuracy of placing oneself in international relations for the purpose of organizing a directed and directed negotiation process productive.

Prof. IB Wyasa Putra hopes that the forum which is being held will function productively in building understanding and perfecting the draft, so that our common hope for peace and peace building in the ASEAN region can be realized. We have high hopes for Indonesia's role in mediating between parties with conflicting views and interests, so that the conflict can be resolved quickly and peace and peace in the South China Sea region can be realized.