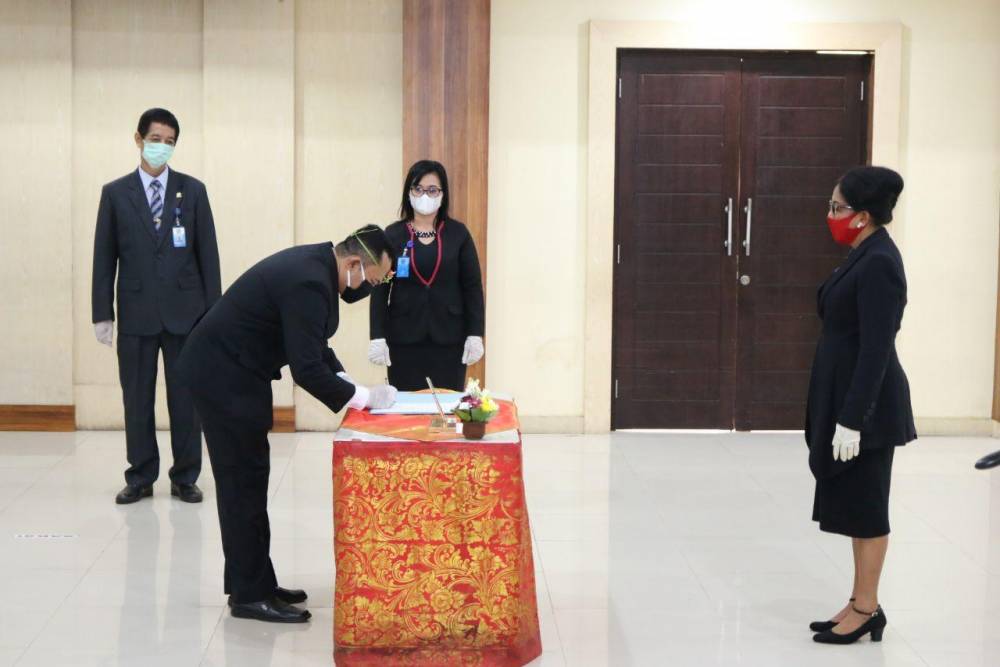 Denpasar - Today, Wednesday (5/20/2020) Chancellor of Udayana University Prof. A.A Raka Sudewi inaugurates 11 funcionaries there are the Head of Administration of Agriculture Faculty , and 10 Heads of Subdivisions within the Head Office and Faculty. The inauguration and Position Handover event held in Nusantara Room of  Agrokompleks Building, Sudirman Campus, Denpasar.

Unlike the official inauguration ceremony, this inauguration event was apparently quiet and was only attended by the Chancellor, Deputy Chancellor, the Head of General Bureau, HR Department and Officials who were appointed. This event also following Covid-19 prevention protocol which is body temperature screening, wearing masks and gloves as well as implementing distance between attendees.

The leaders and other invitees attended the inauguration ceremony online through Unud Webex application from their respective residences. The inauguration program was also broadcast live streaming on YouTube by Udayana TV.

Unud Chancello Prof. A.A Raka Sudewi in her speech said that the inauguration was held more effectively and efficiently in accordance with the form letter of the Head of BKN related to inauguration and oath of civil servant /position promises via electronic media during the emergency status of the corona virus outbreak. The Chancellor further said that the promotion and transfer of positions was carried out because of the organization  needs and already passed the selection stages and the meeting of Baperjakat Team.

The inauguration program which involved online invitations went smoothly and successfully. The succeed of this activity was also supported by USDI Chairman and staff and  Udayana University Media Team.