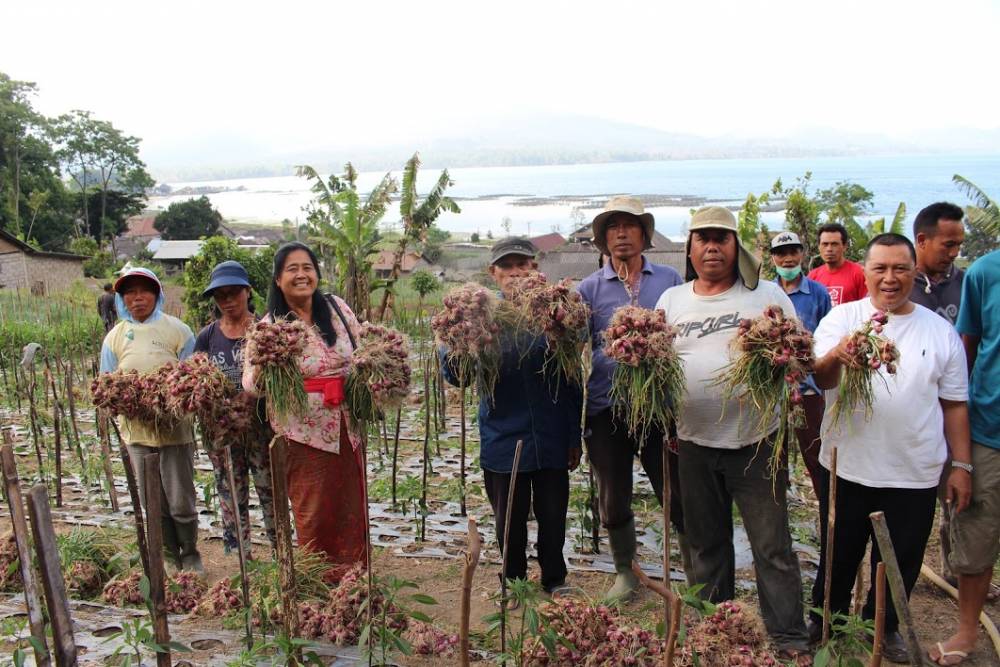 Partner Village Development Program (PPDM) by LPPM Udayana University is back conducted in the village of Buahan, Kintamani, Bangli on Sunday (09/15/2019). Buahan Village located in Kintamani tourism area which is well known by tourists, however, tourism activities have not provided significant benefits for the surrounding community mostly as vegetable growers. Therefore, the development of the Village of Buahan as an organic farming center, agriculture began two years ago help the surrounding community. The village development activities that have been carried out are : Socialization and coordination of the implementation of activities with village officials and target communities, development of rural tourism potential with organic farming systems, making demonstration plots shallot plants outside the growing season, maintenance of biogas, utilization of biosllury for mole and earthworm cultivation, intercropping onion and large chili peppers, making fried onions and tomato sauce and packaging.

According to the Chairperson, Mrs. Dr. Ir. Ni Luh Katini, MS., Agro-tourism with the system integrated organic farming (cattle-biogas-earthworms-fish, organic crops and agrotourism) has a pretty good opportunity to be developed because it adds value to farmers who implement organic farming systems, integrated with their livestock. Processing livestock waste with biogas systems can produce gas that is utilized for cooking and bioslury are used for liquid fertilizer and for earthworm feed. This matter encourage the independence of farmers in the field of fertilizer and energy. Energy produced from biogas enough to be used for daily cooking and for the development of onion entrepreneurship fried and tomato sauce. He also added that with this organic farming system, for organic onions in a few months it will shrink but not as much as the results harvest onions using pesticides. Likewise, chili and tomatoes. If it's chili using chemicals, the pan is only up to 7 times but after using organic farming harvest can be up to 15 times. So the benefits can be directly felt by farmers here from the field the economy and environment are clean.

Mr. I Nyoman Tara as Chair of the Organic Group in Buahan Village said below him has 20 members, and all of them feel that the harvest is far away better with organic farming than agriculture using pesticides. Seen from yields of onions, usually the strength of onions lasts 25 days at the most using organic farming for up to 3 months after harvesting not too much onions experiencing shrinkage. He also added that he was very supportive of the agriculture program This organic is to maintain the cleanliness of the lake and the surrounding environment. (mnk)