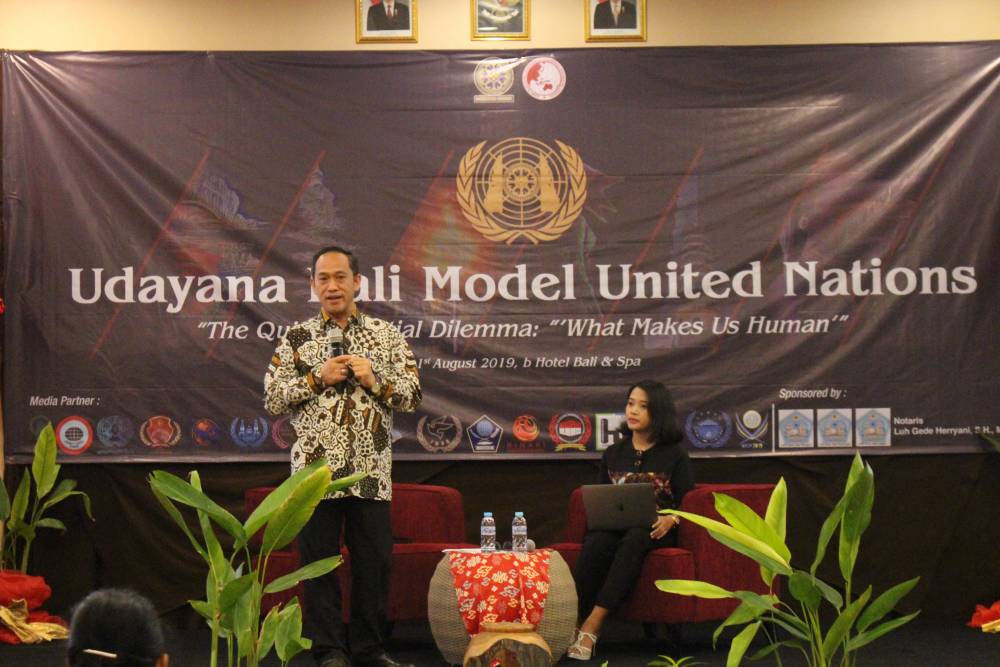 Entering its fifth year, the International Relations Udayana University student group held  Udayana Bali Model United Nations (UBMUN) on August 18-21 at Hotel Bali & Spa. The event which opened on Sunday (18/8) carried the theme of The Quintessential Dilemma: "What Makes Us Human", which began with a seminar on the first day. It featured by well-known speakers, namely Achsanul Habib as Director of Human Rights & Humanitarian Affairs of the Republic of Indonesia and also Putu Eka Guna Yasa SS, M.Hum as a lecturer at the Faculty of Cultural Sciences, Udayana University, which generally discusses culture in indigenous people (indigeneous people), then on the second and third days enlivened with a conference, where all participants from each delegation will discuss related issues in each council.

By the total of 50 participants came from all institutions in Indonesia, Putu Ayu Meisya Anandira Erawan as Secretary General, UBMUN besides training soft skills, always wants to produce young people who are more sensitive to the latest global issues, especially inviting them to support government performance.

A similar issue was expressed by Achsanul Habib who was very interested in UBMUN theme this year, "This is interesting because the international debate on the issue of indigeneous people has not yet been completed. Then the next question is, what about Indonesia? What can Indonesia provide and what Indonesia can get from the world debate earlier. "Then by doing more literature and practical studies from several discussions in the world on the issue of indigeneous people, young people are expected to have accurate understanding and concepts.

Who also attending was Vice Dean III of the Faculty of Social and Political Sciences, Udayana University, Dra. Nazrina Zuryani, M.A., PhD, who always supports the activities of her students and expects significant progress both for participants and organizers. "So my suggestion is to create a forum that lets us know that with Udayana Bali Model United Nations, there really is a model that can be developed. And I emphasize once again, being human like them is not easy if it does not create sophisticated relationships and networking, "he said. (sis / ben)