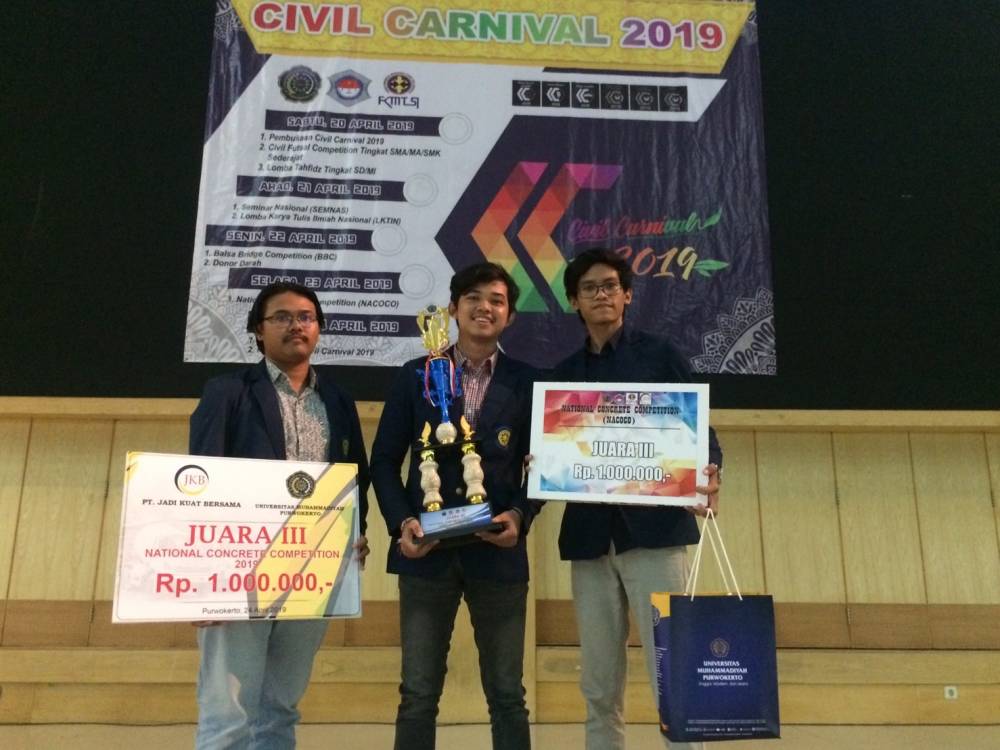 At National Concrete Competition 2019 which was held from April 23-24 2019, Udayana sent two representative teams, each team consisted of three Civil Engineering students to compete with universities from all over Indonesia. In this competition, students compete each other looking for new innovations regarding concrete making that are more economical yet have high quality and still considering environmental and social aspects. There were five teams who made it to the final round, namely representatives from ITS, UGM, UNUD, Muhammadiyah Purwokerto University, and UNS.

From two representative teams sent by Udayana, only one team passed the final round and won third place. In participating National Concrete Competition 2019, preparations and trainings were conducted for three months and guided by lecturers to get careful planning about making of SCC concrete.

In this competition, Civil Engineering students at Udayana University succeeded making new innovations regarding the manufacture of SCC concrete. Rae Christian, one of the members who won National Concrete Competition 2019 stated, in making SCC concrete, they used rice husk ash as a substitute for cement in a certain proportion. this material is used in consideration of the silica content contained in rice husk ash, and the availability of this waste is quite a lot. Through the Central Statistics Agency (BPS) data, as many as 11,565,173 tons of milled dry grain found in March 2018, this is a consideration to make rice husk ash as a substitute to replace the use of cement. In addition, in making this concrete, they use tabas as a substitute for gravel. Basaltic tabas or scoria stones are the result of a massive volcanic eruption in Karangasem area. These stones can be found on craftsmen along Jalan Prof. Dr. Ida Bagus Mantra, this waste was not used by pelinggih, Its only pile up in the work area of ​​the craftsmen. When they use this tabas stone it can reduce the waste. They also use sugar as a substitute for admixture because it is available and does not damage the environment. However, these materials have their respective proportions. (Plt)