The Competition and Charity of English Department 2018; an Event to Shape Young Generation with Characters 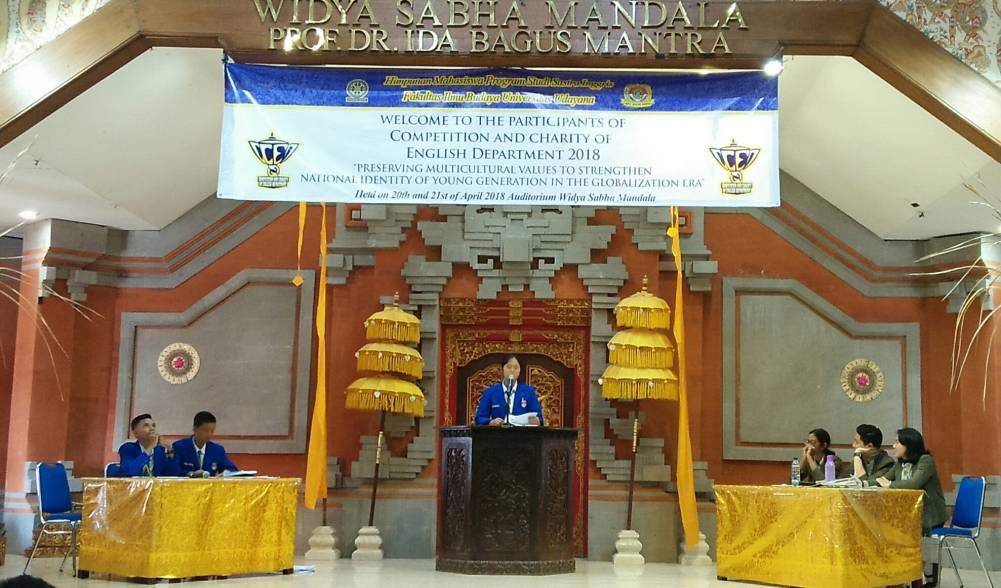 The Atmosphere when Both Teams Started To Compete for the Champion Title at Widya Sabha Auditorium, Faculty of Cultural Sciences, Udayana University.

The theme of this activity is "Preserving Multicultural Values to Strengthen National Identity of Young Generation in the Globalization Era". Based on the theme, the event was held through three series of competition namely; Essay Competition which was followed by 21 participants, Debate Competition followed by 9 teams, and Speech Competition with 5 participants.

According to the statement of Putu Ina Larassati as Chairman of the Committee, this event has the purpose that young generation are able to preserve their own various cultures, even though we are currently in the modernization era.

At Widya Sabha Auditorium, Faculty of Cultural Sciences, Unud, the grand final round of the Debate Competition was held on the second day. Schools that qualified to this round were Harapan  Christian Senior High School, 2 Denpasar Public High School, and 1 Bangli Public High School. Through this competition, there would be obtained the winners as 1st, 2nd, and 3rd champions, best speakers, and best presentation.

In addition, CCED also conducted a charity event targeting 5 Redingkit Public Elementary School, Singaraja. The activity was in the form of English teaching and learning and the distribution of stationeries and textbooks as donations for the elementary school students.

With the implementation of the competition and charity, it was expected that those activities would be able to form young generation’s identity in accordance with their culture and not eroded by the current globalization. (khania)