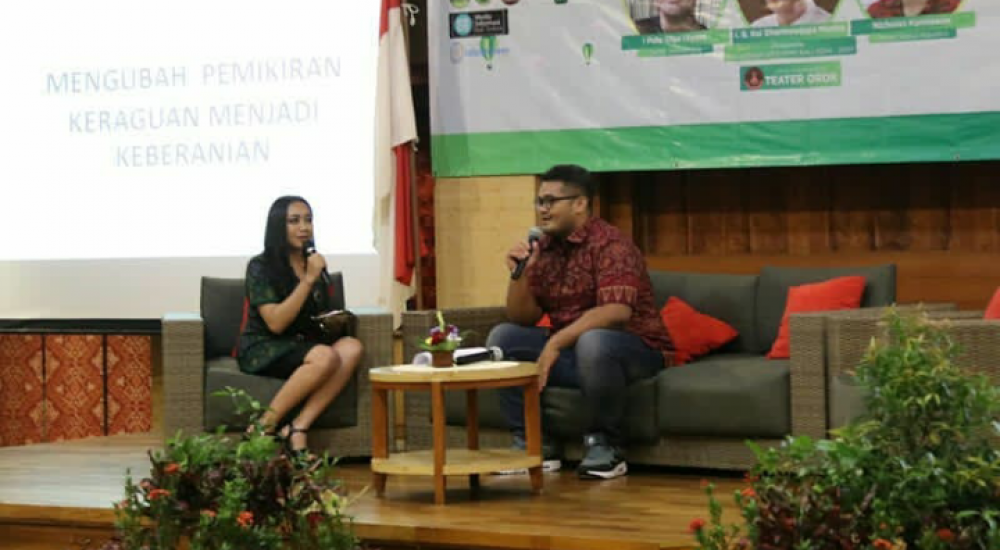 Material Explanation by I Putu Giga Ulyana as a speaker

"This event is an annual event conducted by Udayana University’s Entrepreneurship Student Activity Unit, and hopefully this event can continue to spread spirit, especially for young people to start being an entrepreneur" said Dwi Ari Ardiyanto, the chairman of this national seminar committee.

Furthermore, Indah Setia Alam, the Chairman of Udayana Entrepreneurship Student Activity Unit also said that to be an entrepreneur, we must have a strong firm and it is never too late to build a business.

"Better Late than nothing. That is the theme we are holding for this seminar. We look to Herland Sanders, the owner of KFC who started his business at the age of 65. This gives us a lesson that a bossiness can be done or started anytime without considered as late, "said Indah. In addition, this Archeology student has also successfully established cooperation with the head of Denpasar Young Entrepreneur Community, Dr. Wirama in carrying out the implementation of entrepreneurial activities.

This seminar invited great speakers in the field of entrepreneurship such as Nicholas Kurniawan  as Venus Aquatics owner, I Putu Giga Ulyana as the owner Twisterdog, and I Made Sariawan, M.Si as the head of Economic Affairs of Denpasar City Government. Besides, there was I Dewa Gede Oka, the Task Executor Person of Udayana University Student Affairs Bureau as a representative of the Rector that opened this national seminar.

In his speech, Gede Oka greatly appreciates this routine activity and it is expected to continue annually. In addition, he said that this entrepreneurship program is a national program under Kemenristekdikti (Ministry of Research and Higher Education) that will continue to be developed in Udayana University. In 2017 Udayana has managed to generate 70 young entrepreneurs, and in 2018 is targeted to reach 130.

"I really appreciate this activity, hopefully it will be continued in the following years. Since entrepreneurship has become a national program, so we have also established entrepreneurial institutions in addition to the existing Entrepreneurship Student Activity Unit which is the Student Entrepreneurship Development and Student Career Development that will become a space for students who want to develop their business. Besides, students will also be guided by lecturers to make business plans" I Dewa Gede Oka stated.