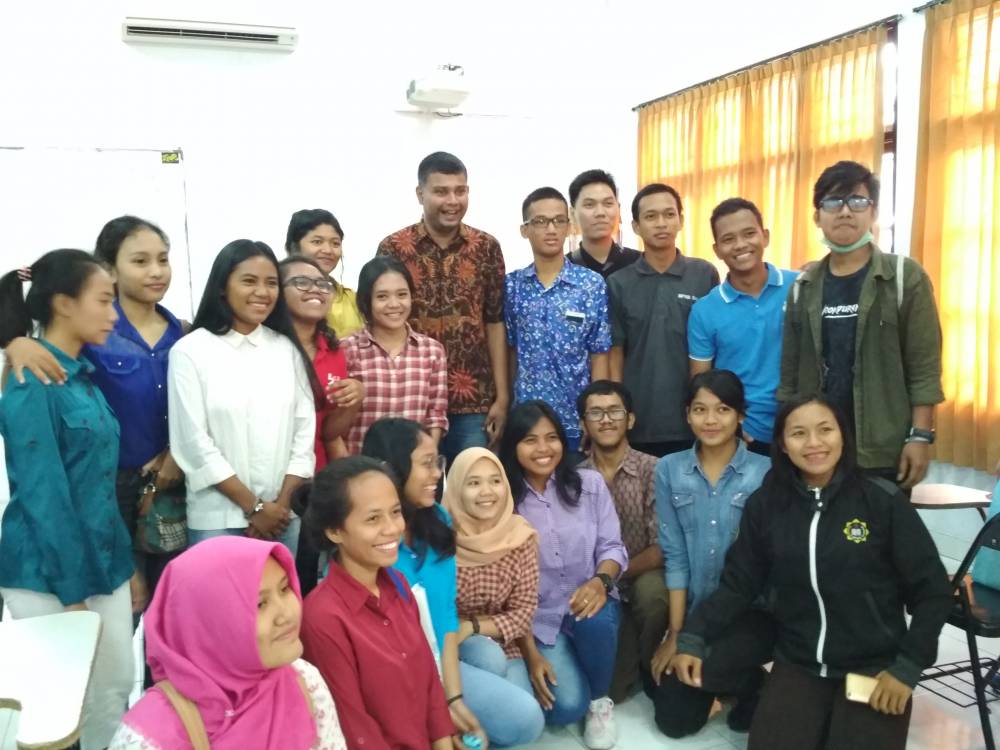 Dr. Vivek takes photos together with the students of Historical Science after giving a general lecture of Health History in Room 6 of Dr.Goris Building

Denpasar – Friday (26/2018), Historical Study program held a public lecture with Vivek Neelakantan, a lecturer from India. The material presented was the health history of Soekarno era. It could be said that the study of the History of Health is a new study program first obtained by students of History Study Program.

"The material of this health history has never been taught to the students. Now with the opportunity of the arrival of Dr. Vivek to Udayana University, he wants his experience to introduce the history of health in Indonesia. this is a very good thing in the opening of the knowledge, especially for the history students in choosing a research topic later." said I Nyoman Sukiada, M.Hum., Coordinator of the program of History of History.

The general lecture that was held in Goris Building was also welcomed by the academic community of the Faculty of Cultural Sciences. Not only the students, but the lecturers of history also follow this general lecture.

In the presentation of the material, Dr. Vievek explains the history of health in Indonesia during the Soekarno era which is still thick with traditional treatments. At that time the people during the reign of Soekarno did not use medical drugs because Sukarno wanted to make the state of Indonesia a self-sufficient country (stand on their own feet). Apart from that, there are several factors that require the community to do traditional medicine such as herbal remedies, especially in rural areas. These factors are economic factors. The inability of the community to medically medicate requires them to use natural herbs for treatment. In terms of medical should be a potential that can be developed in Indonesia, so as not always dependent with other countries.

More than that. Nyoman Wijaya, a history lecturer tried to link health events during the Soekarno era with Jokowi.

"Public health in a country is certainly part of the government's responsibility in overcoming it. The epidemic of measles in Soekarno's times was in fact reoccurred in Jokowi's time. The diphtheria epidemic that occurred several months ago has claimed the victims, and recently Indonesia was thrown with malnutrition that attacked children and toddlers in Papua to kill dozens of casualties. What is wrong with Indonesia, its government or its people. Of course, this becomes a big consolation of the government that regulates the way of social wheels both in economic and social." he said clearly. (Ism)