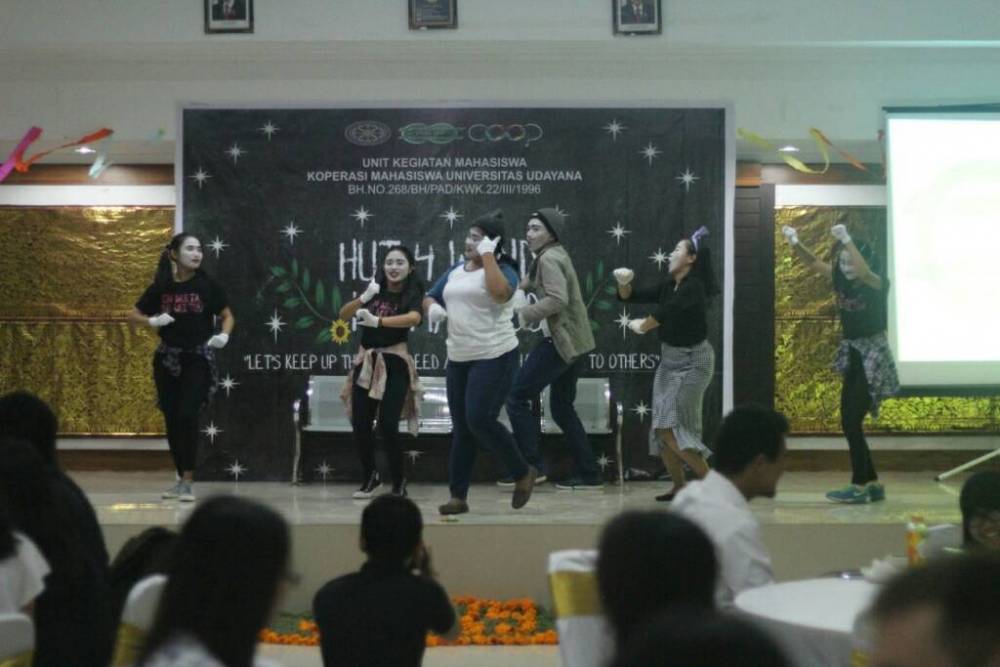 Denpasar – Saturday, 9 December 2017 KOPMA SME (Student Cooperative) Udayana University carries out the peak of activities in the framework of 4 Windu's Birthday. This activity is routinely held every year and this year takes the theme of "Let's Keep Up The Good Deed and Share Happiness with Others". The commemoration of the 4th anniversary of Windu KOPMA was held in Nusantara Room, Agrokomplek Building, Sudirman Campus, Denpasar. In addition to commemorating the anniversary KOPMA Udayana University, this activity also aims to foster a sense of kinship and togetherness.

There are two series of activities carried out before the peak activities, namely social work, and the competition. The categories and the winner as follows.

The peak activity commemorate the 4th anniversary of Windu KOPMA Udayana University has been started since 18.00 WITA by presenting a lot of entertainment, such as pantomime, operet, tarrot, palm reading, and acoustic band and the main guest guest is stand up comedy from bli Dode. Although there were some obstacles, but this activity took place very lively with followed participants reached 200 people. The committee takes approximately two months to prepare for this activity.

Dwi Tirta, the committee chairman in this activity was happy because the participants could feel this activity. "For next year the preparations will be matured and the show is more and made the events more interesting and innovated again", he said.

Komang Desi as chairman of KOPMA SME Udayana University revealed that this year's celebration is different from the previous year, because this year dare to invite other SMEs and want to establish good relations with SMEs and alumni. "If last year the place is still small, while this year dared to take bigger place and elegant design. For the next year I hope it is better and preparation is more mature and able to present entertainment that is more entertaining than this year ", he said. (fai)