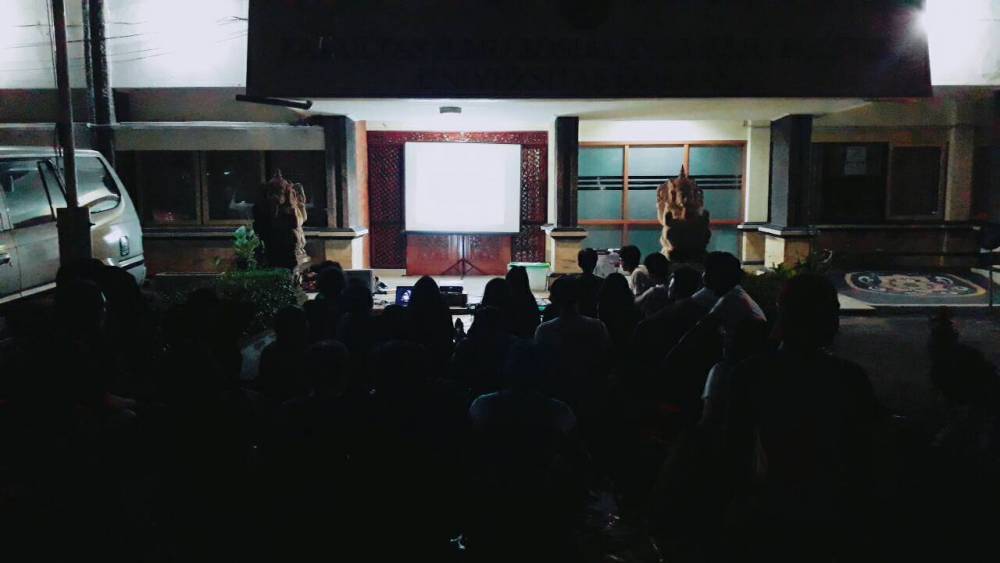 The ambience of film screening in “Teras Fisip”

Teras Fisip was came with the same concept but brought a different topic of discussion. This time, Teras Fisip dealt with feminism. The activity that held on 27 October 2017 was held in Building B, Faculty of Social and Political Sciences, Udayana University. With the concept of film screening, the Student Executive Board of the Faculty of Social and Political Sciences, Udayana invited the general public to join the activity entitled "The Fisip Terrace of the Feminism Review Series".

The film that was raised on this occasion was "Tiga Dara". Through “Tiga Dara”, was wished to bring back the discourse on feminism by analyzing how the relation between gender character and stereotypes is diceped in the film, with the values ​​established by patriarchy. The “Tiga Dara” film was chosen to be appointed as a representative of the topic on this occasion, because the film contained a story wrapped with feminism issues in its era, and also a proposal from colleagues at Denpasar Street Library.

The event started at 7:30 pm until about 21.30 pm, that was started with the opening and was continued with screening of the film, and then there was a discussion session. In the discussion session was also brought the discussioner namely Fatiha Sabiella Rahma from Law Science and also Cut Nur Sabilla from Public Health Study Program. And for the sake of the event that can be ran well, the organizing committee has done all the preparation. Which started with determined the topic of discussion, the film that was lifted, as well as other technical preparations that have been prepared from about a month ago.

The participants who attended this event amounted to about 30 people who was came from various backgrounds, there were also present from the Denpasar Street Library community, from the Faculty of Social and Political Sciences itself, and also the other public audiences. According to Anang, as the person in charge of the activity, there was needed to be a means like that implemented in the event, because the formal discussion was gradually getting less and less interested, so it was expected through Teras Fisip to be a new discourse stage especially for Udayana University students, to the students who are gradually already lost of their students “sense”. (Silya)