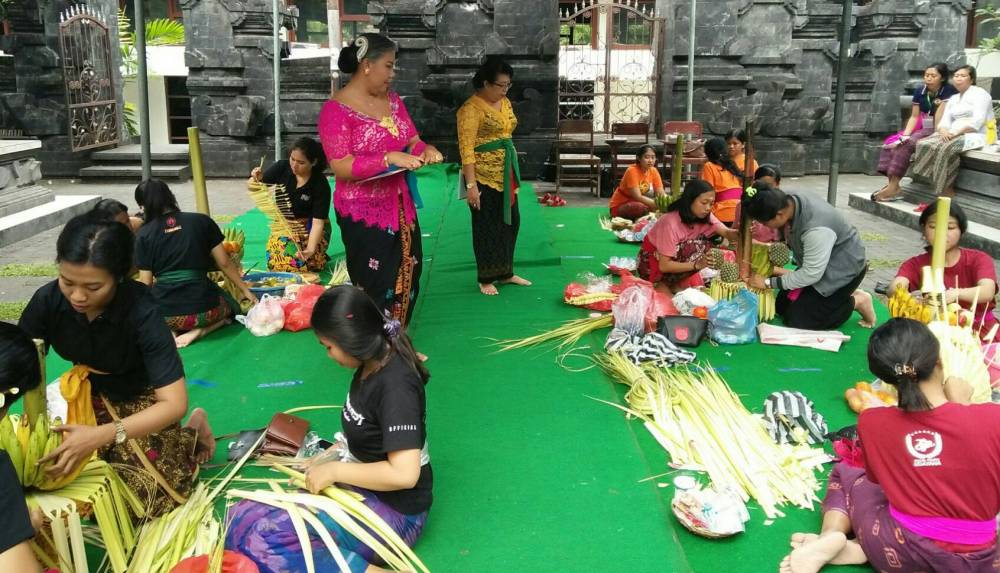 The atmosphere when the participants of each Faculty at Unud are following the Gebogan contest in the event of Gema Bhakti Saraswati XLIII.

Denpasar, (18/8) Students who are members of the Brotherhood Forum of Hindu Dharma Students, Udayana University implemented Gema Bhakti Saraswati XLIII. The celebration of Saraswati Feast day which occurred on 19th of August 2017 carried the theme of "Widya Wiweka Yowana" which means an intelligent youth sorting by knowledge.

This implementation was marked by a series of events that started from 18 to 20 August 2017. The first day of the events had been done by contest of making Gebogan and Penjor, held in Padmasana Widya Maha Amrtha, Sudirman Campus attended by the representative students of each faculty of Udayana University.

Furthermore, on 19th of August 2017, there would be held a praying together and Literature Night of dharma wacana, which would be presented by Putu Eka Guna Yasa as a speaker in the Bhakti Gema Saraswati event. Coinciding with Banyu Pinaruh on 20th of August 2017, FPMHD students would conduct ngayah at Taman Pecampuhan Sala Temple, Banjar Sala, Abuan Village, Bangli. This activity could be followed by Udayana University students by registering themselves in Public Relations of FPMHD Unud.

"I hope that in the next year each faculty will be more enthusiastic in participating the implemented competition and can show the spirit of Hindu students at Udayana University". Hoped Luh Widyasari as Chairman of the Committee of Gema Bhakti Saraswati. (dessrimama)