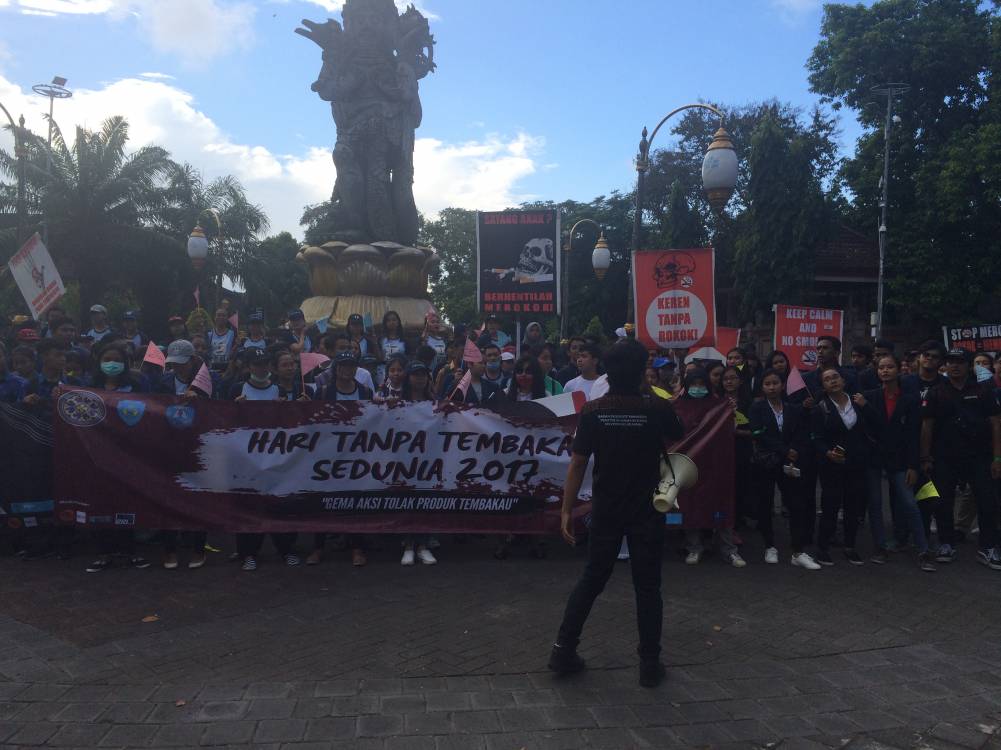 The atmosphere of oration in the Peace Action, HTTS 2017

In order to commemorate the World No Tobacco Day (HTTS) which is regularly commemorated every May 31st, Public Health Student Association (HMKM) of Faculty Medicine, Udayana University held a series of activities such as Public Poster Competition, Community Service, and Peace Action. This HTTS activity involves several parties, such as Denpasar Health Office, IAKMI, and BTCI. The goal to be achieved in this activity is to increase public awareness about the dangers of tobacco for health and create a responsive community to health problems caused by smoking habit to minimize the number of smokers.

The HTTS activities carried out in several series of activities started with Public Poster Contest on this occasion with the theme of "The Dangers of Conventional Cigarettes and Modern Cigarettes", in which the implementation of this activity has been held on March 20th to April 1st, 2017 ago. With a race systematics, it only needs one person with the best poster based on the judges' judgment, as well as two favorite poster champions based on the most like Instagram.

Not only coupled with the race, the activities of HTTS 2017 is also coupled with community service activities. The concept of community service activity is in the form of counseling to SD 1 Kerobokan, SD 3 Kerobokan, SD 4 Kerobokan, SMP 1 Kuta Utara, SMP Ngurah Rai, and SMP Budi Utama located in Badung Regency. On the occasion of this counseling, as for the matter raised is the "No Smoking Area" (KTR) and also the dangers of cigarettes, with the theme "Implement knowledge early on for the smoke-free generation". This extension activity was carried out earlier on 13th of May 2017 ago.

As the peak and climax of this HTTS event, the "Peace Action" was held. The event, which was held around Catur Muka, Denpasar, was held since 15.00 Wita on 27th of May 2017. The event was opened by the Head of Program of Public Health Sciences, Faculty of Medicine, Udayana University. This activity was packaged in the form of oration with the theme "Echoes of Action Reject Tobacco Products". In this activity held oration activities in the form of peaceful action, counseling, long march, and theatrical to call for the dangers of smoking for public health. The issues raised in the oration during the peaceful action was related to cigarette advertising and WTPM. The participants who attended the event were not only from Udayana Faculty's committee and environment, but also Udayana students in other faculties environment, Undhira, Unwar, Dwijendra University, and SMP 1 Denpasar.

In the success of this series of HTTS activities, the committee did the preparation since three months ago. Starting with the establishment of the committee, the preparation of the concept of the event, the search for participants, as well as matters concerning the technical activities of his other. According to the Chairman of HTTS 2017, it was expected that the benefits was able to raise awareness and public awareness on the tobacco hazard for health and to raise public awareness of the importance of the application of Non-Smoking Area (KTR) based on Bali Regulation No. 10 in 2011 as Measures to reduce the number of smokers and create Indonesia smoke-free. In addition, the benefits of this activity were also to minimize cigarette advertisements and invite the community to refuse the re-establishment of WTPM, "Our target activities are actually all circles, but especially to the younger generation in order to minimize the consumption of cigarettes early on. Before trying, it's better to avoid first. Because we better prevent than to overcome ", he said. (mimi)