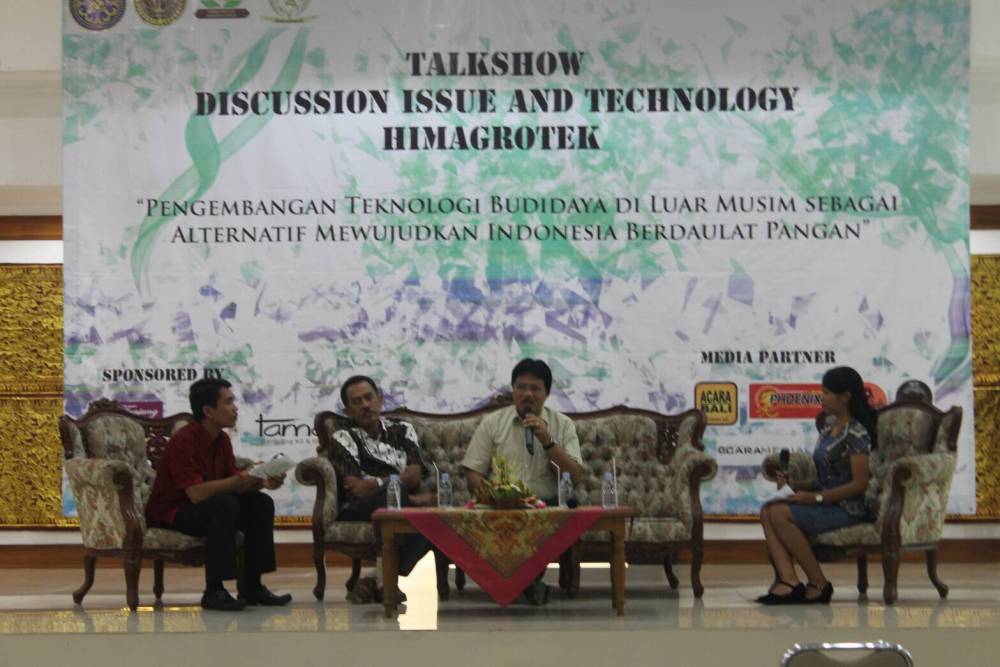 In the framework of running an annual work program, Agrotechnology Student Association (HIMAGROTEK) Udayana titled talk show event known as 'Discussion Issue and Technology HIMAGROTEK' (DISTEC), which on this occasion raised the theme "Development of Outdoor Cultivation Technology as an Alternative to Realizing Indonesia Sovereign Food ". This activity took place on Saturday (13/05) at Nusantara Room, Agrokompleks, Sudirman Campus Udayana. This event started at 08.00 WITA and opened by the Lecturer Counsel Himpunan, namely Mr. Alit Susanta Wirya. Also attending are invited guests in this activity such as Lecturer Pembina, Secretary of Udayana Agrotechnology Department, and Chairman of Student Association in the Faculty of Agriculture Udayana.

This activity has been in preparation for the three months, starting from the formation of the committee, fundraising, sponsorship, taking care of the licensing letter, as well as the technical needs of its other activities. This successful event was attended by about 100 participants, where the participants of this event came from Udayana students themselves as well as other university students in Bali as well as the general public. This activity is packed in the form of talk show, where at the beginning of the event was opened by the Head of Department's representative, Lecturer Guidance Counselor, Then continued with the delivery of materials by the three speakers presented by the committee, and at the end of the presentation of material held discussion activities concerning material that has been described before it.

The speakers presented by the committee is a figure who is expert in his field as well as competent in the field of cultivation techniques out of season, as evidenced by the journals that have been able to be produced by these figures. The figure is Prof. Dr. Ir. I Nyoman Rai, Ms, the Dean of Faculty Agriculture Udayana University, he said on this occasion to review the technology of cultivation outside the season. Then also present the second speaker, namely Ir. I Gusti Alit Gunadi, Ms. Who is one of the lecturers at Agroteknologi Agricultural Faculty of Agriculture Udayana and he discusses the history and development of technology outside the season. And the third speaker was Dr. I Wayan Budiasa, SP., MP. Who is one of the lecturers in the Agribusiness Department of the Faculty of Agriculture Udayana, and discuss about the economics of cultivation technology out of season and its development in society. This activity went smoothly and successfully. According to Ari Dewi Wahyuni, as one of the activity committee, "this event is important for our title. Because if reviewed again the condition of agriculture in Indonesia has not been stable, especially in terms of production, other than that many young people who have not been interested in pursuing the agricultural world, but if serious, it can be a very promising profession. Through this event we hope to share and invite all circles to get to know agriculture, especially about cultivation technology out of season according to the theme we lift this year, in hopes to provoke the interest of the community to agriculture, and want to start farming nature or on a large scale " He said (arisugama)