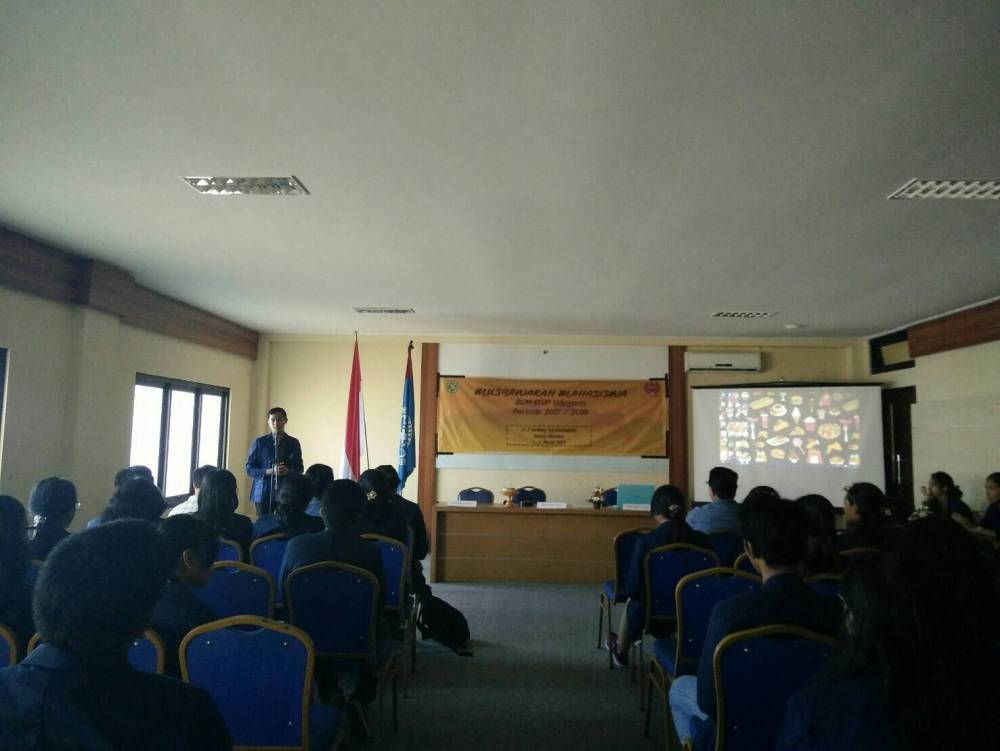 The atmosphere in the student delaboration event, which located in Bhinneka room, Agrokompleks, Sudirman.

As a first step in implementing a new management, BEM FISIP Udayana held a deliberation activities undertake for two days long. It started on March 1st to March 2nd, 2017. The invitees who are attended the event was the Dean of the Faculty of Social and Politic, Udayana, represented by the Vice Dean III FISIP Udayana, and the Chairman of the Student Organisation (ORMAWA) in the environment of FISIP Udayana. According to Anang Putra, as the Governor of BEM FISIP Udayana, the main purpose of this activity is to formulate the Statutes and Bylaws (AD-ART), which is the base to carry out the management of the organization for one year in the future. So that any future activities, which are to be performed, will be consistent with what is stated in the Statutes and Bylaws (AD-ART). So he thinks that it is important to hold this event because the whole policy will be taken later and it will be based on the AD-ART, and into the bow of the organizations at Udayana FISIP environment.

The preparation is carried out in the framework of this activity are not only the technical preparation for the event, however the functionaries of the Student Executive Board at Udayana FISIP environment also restudy the Statutes and Bylaws (AD-ART) before his stewardship. It is due to give an opinion regarding the advantages and disadvantages to be proposed in the discussion of stewardship BEM AD-ART FISIP 2017/2018 in order to better and more effectively. This event was attended by 51 participants, where the 42 people are functionaries of BEM FISIP Udayana 2017/2018, 3 people are the outgoing functionaries of BEM FISIP, and each of the representatives from each set of students in the environment FISIP Udayana, and reviewers. This student delaboration activities was held in Bhineka Room, Agrocompleks Building, Kampus Sudirman., On the first day, it was lasted from 17:00 to 20:30 pm and on the second day took time from 17:00 to 19:30 pm. This event was packed in the form of a formal hearing, where there were one to three plenums. On the first day, it discussed about the order, the election of presidium and AD-ART; and on the second day, it discussed the further the establishment of AD-ART. This activity was going quite conducive and successful. It could be seen from the enthusiasm of participants on the second day of activities, where it followed the qualify of the forum which said that the participants exceed the minimum threshold of activity. (mimi)