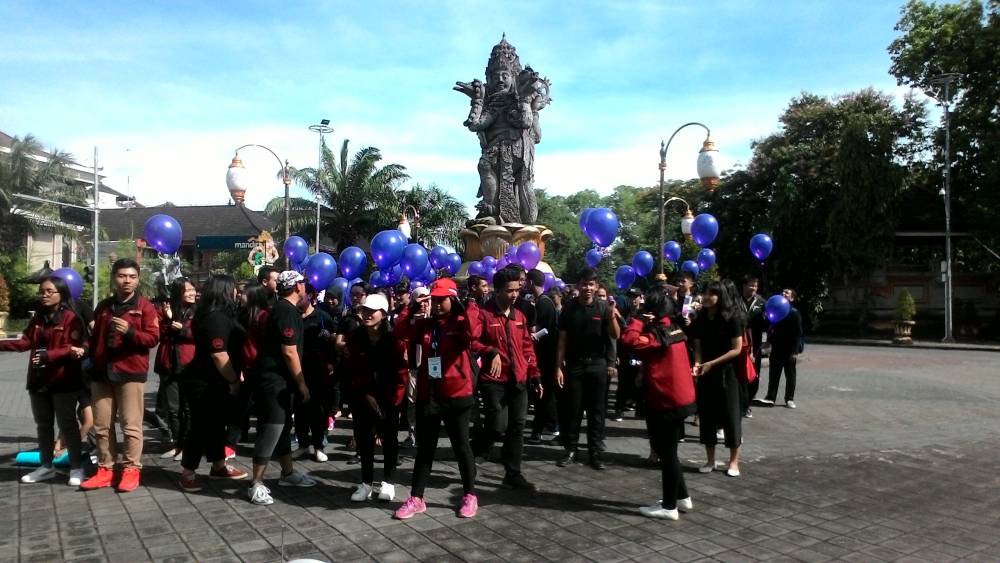 Commemorating the world cancer day, Cancer Care Semi-autonomous Student Community Board (KOMPAK), Faculty of  Medic and Health Science of Udayana University held a long march and a speech on last Saturday, February the 4th. The Long March was started from Kampus Udayana Sudirman to  Catur Muka statue in central Denpasar. Furthermore, speeches were delivered in front of the Catur Muka statue. There were approximately 200 participants in the Long March.

Chairman of the Committee, Luh Putu Virayanti Diah said that, the activity to commemorate the world cancer day was annual program conducted by BSO KOMPAK of Facuty of Medic and Health Science. This year various activities were carried out to commemorate the world cancer day. Starting on 14th of January, 2017 KOMPAK had educated several junior and senior high school in Denpasar  about cancer. In the following day, 22nd  of January, 2017, KOMPAK carried out the next program which brought up the theme “Sharing the Love with KOMPAK” in a halfway house inhabited by cancer patients during their treatment in Sanglah hospital. KOMPAK also shared provisions as well as wheelchairs to the patients in need.

Special on 4th of February 2017, right on World Cancer Day, the Long March and oration were performed. The Long March and the oration aimed to give an understanding to the public about cancer.

In addition to the Long March and oration, KOMPAK also distributed free pins and brochures. The community also opened several booths where people can check their blood pressure, blood sugar and uric acid. At the end of the activity, KOMPAK collectively released purple balloons, symbolizing various types of cancer in the world. (dessrimama)