Udayana University One of the Universities Receiving Cash... 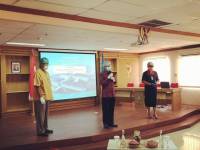 PPLPI Cares for Covid-19, Handed over PPE and Nutrition...

On 6 October 1992, Udayana University was appointed by Department of Education and Culture of the Republic of Indonesia to hold master (strata two) level education. Until now, it has 25 master programs, scattered in all faculties in Udayana University environment. Particularly, Economics Master Study Program of Unud (PS MIE PPs Unud), was established in 2001 by Decree of Director General of Higher Education of Department of National Education Number 1809/Dikti/Kep/2001, date 30 April 2001.  The License was extended through Rector’s Decree of Unud Number 3455/D/T/K-N/2010, date 18 August 2010. It has 4 concentrations, i.e. Local Development, Local Finance, Industrial Economy, and Financial Monetary and Banking concentrations. The title obtained after finishing the study is Master of Science or MSi.

Vision and Mission of Magister Economics

To achieve the graduates of Master in Economics who are excellent, independent, and civilized as professional managers or leaders in economic development, as well as have national and international competitive advantage in 2017.