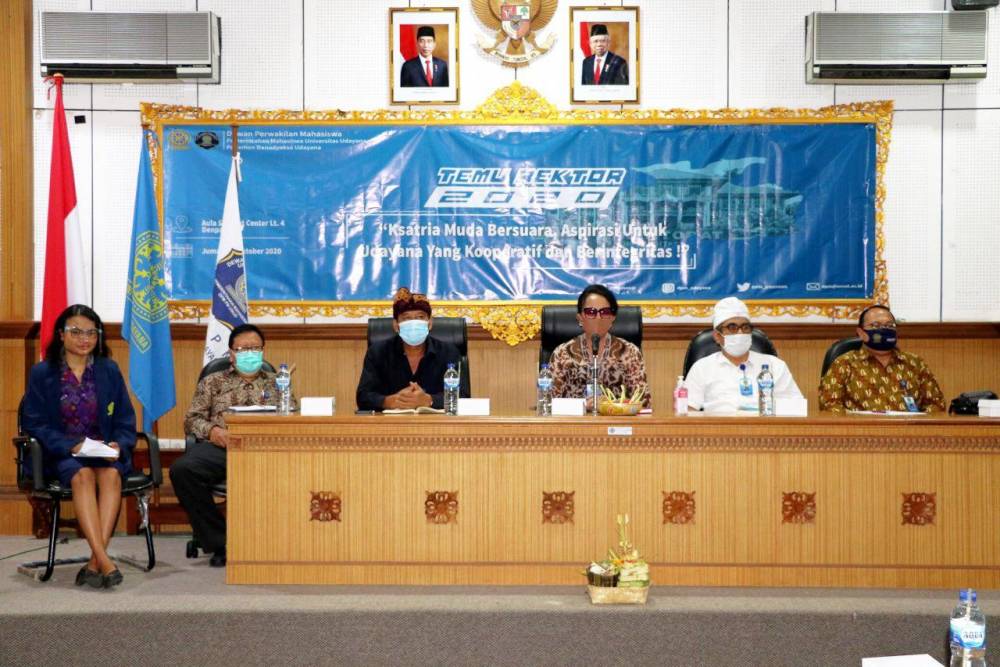 Udayana University Student Representative Council (DPM PM) held a 2020 Rector's Meeting. The Rector's Meeting was held at the Nation Room, 3rd Floor, Rectorate Building, Bukit Jimbaran Campus, Friday (16/10/2020). The event was opened by the Rector of Udayana University Prof. Dr. dr. Anak Agung Raka Sudewi, Sp.S (K), followed by the leadership of the Rectorate from the Nation's Space, and followed by Online by the Heads of Institutions, Deputy Deans for Student Affairs and representatives of BEM PM from each faculty. This year's Rectors Meeting carries the theme "Young Knights Voiced, Aspirations for Cooperative and Integrity Udayana".

The 2020 Rectors' Meeting is a forum for all components at Udayana University to jointly convey aspirations, developments and evaluations related to several policies that have been implemented to build the beloved almamater of Udayana University.

The Chairman of DPM-PM Ananda Devi said that the 2020 Chancellors Meeting was a routine activity which was held once a year. This activity has been designed since the beginning of February 2020 and due to the pandemic, it can finally be implemented today. Through this meeting, it is hoped that students can convey their aspirations directly to the Rector.

The Chairman of DPM-PM hopes that the committee and the invitees who convey their aspirations will get the answers as expected in order to advance Udayana University in the future.

The Rector also explained material related to the four pillars that have been implemented at Udayana University which includes facilities and infrastructure, discussion of PKM and the independent learning program on an independent campus. The last session of the Rector Meeting was filled with questions and answers between the Rector and his ranks and the Rector Meeting participants.

The Governor of Bali Submits DIPA for TA 2021 from Udayan...

Signing of the Extension of the Memorandum of Understandi...

Supporting the Implementation of Free Learning-Merdeka...

Appreciation of the Health Sector to the Bali Police...