Udayana University's 58th Anniversary as a Moment of Self-Introspection, The President of the Republic of Indonesia Expects Unud to Take an Active Role in Adaptation to New Habits 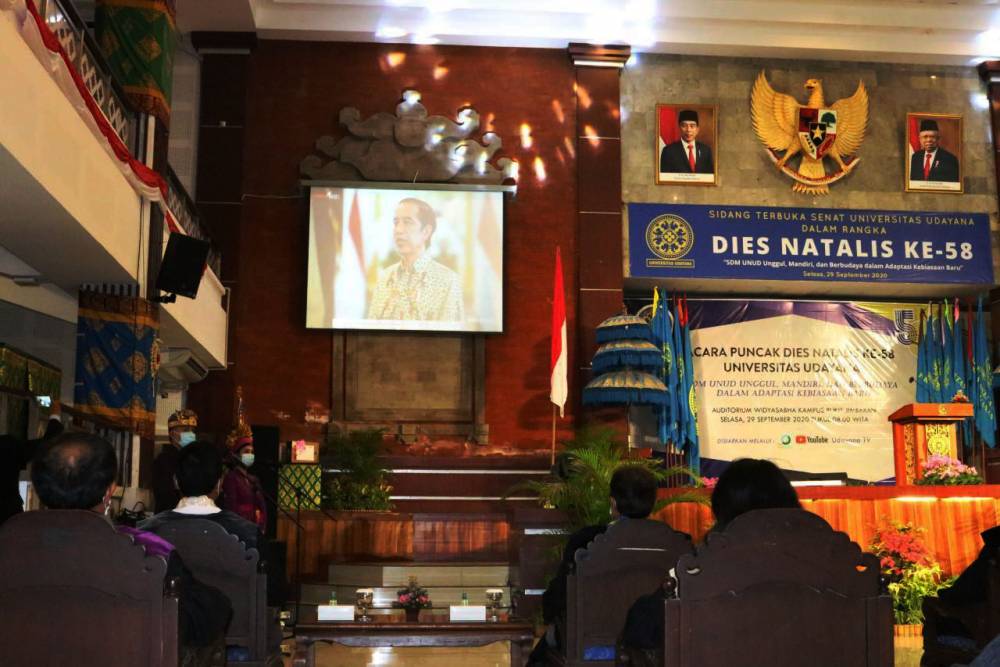 Jimbaran - Udayana University held a Senate Open Session to commemorate the 58th Anniversary, Tuesday (29/9/2020). In the midst of the Covid-19 pandemic, this year's Dies Natalis commemoration was carried out offline by implementing health protocols, and online through the Webex Meeting.

The theme raised in the commemoration of this year's anniversary is "Unud Human Resources is Superior, Independent, and Cultured in Adaptation to New Habits".

The highlight of the anniversary this time feels different and more special because the President of the Republic of Indonesia Joko Widodo has the opportunity to congratulate him through an online video. The President hopes that Udayana University will increasingly take an active role in adapting new habits in Bali and Indonesia. Every element in Bali is also expected to work together so that the country will immediately recover from the Covid-19 pandemic. With a vision of excellence, independence, and culture, I hope Udayana University will have a stronger reputation, both nationally and internationally.

Meanwhile, the Governor of Bali, Wayan Koster, in his remarks congratulated and successful on the implementation of the 58th Anniversary of Udayana University. Entering the age of 58, the Governor hopes that Unud can play a more real role in the framework of the birth of young innovators as the Planner Maker for Bali Regional Development. Given the flow of communication and technology that is developing so rapidly if it is not accompanied by innovation, then we will be left behind. It is necessary to understand together that the capacity of a university in the context of regional development is very strategic. Strategic formulations, designs, designs, structures, patterns, targets, indicators and processes of a regional development orientation are ideally produced by universities. For this reason, there is great hope that the results of Udayana University research should be more efficient as the main material for formulating strategic policies for the Bali Regional Development.

At the peak of the 58th Anniversary of Udayana University, a Scientific Oration was delivered by the Chairman of the Indonesian Parliament Dr. (H.C) Puan Maharani. In her scientific oration entitled "Indonesian Human Development with Nation & Character Building" Puan Maharani conveyed that at the age of Udayana University's 58th and Indonesia's 75th, we as a nation have made various advances and are also facing new challenges. The challenge that is in front of us now is of course the Covid19 Pandemic which has an impact on the health aspect and has also paralyzed all community activities. Both in the social, economic, cultural, and even religious activities.

The Covid-19 pandemic is really testing Indonesia's national resilience in various sectors. Our human solidarity is being tested and our capacity to cooperate with others.
To accelerate the realization of Indonesia's progress which has political and social power. culture and economy, so one of our political development agendas going forward is to accelerate the development of Indonesian human beings with character and competitiveness. Higher Education Institutions such as Udayana University must realize the big responsibility that lies on its shoulders. Higher education has a very crucial role in breaking the chain of poverty and the entrance to achieving the welfare of the people of a nation.

Higher Education is the right instrument to increase productivity and quality of life. Education is a long-term investment, as a foundation for the formation of Indonesian people and culture, strengthening the ability to build progress, and a way to realize the welfare of the Indonesian people. We will be able to overcome any tough challenges, as long as our Indonesian human resources have character and are tough.

Supporting the Development of the Free Learning Curriculu...

The Rector Visits Construction Projects in the Unud...

2020 Rector's Meeting An Event to Convey Aspirations to...

BAN-PT conducted a Field Assessment in the Diploma IV...