RECTOR OF UDAYANA UNIVERSITY AS SPEAKER IN SDGs FORUM 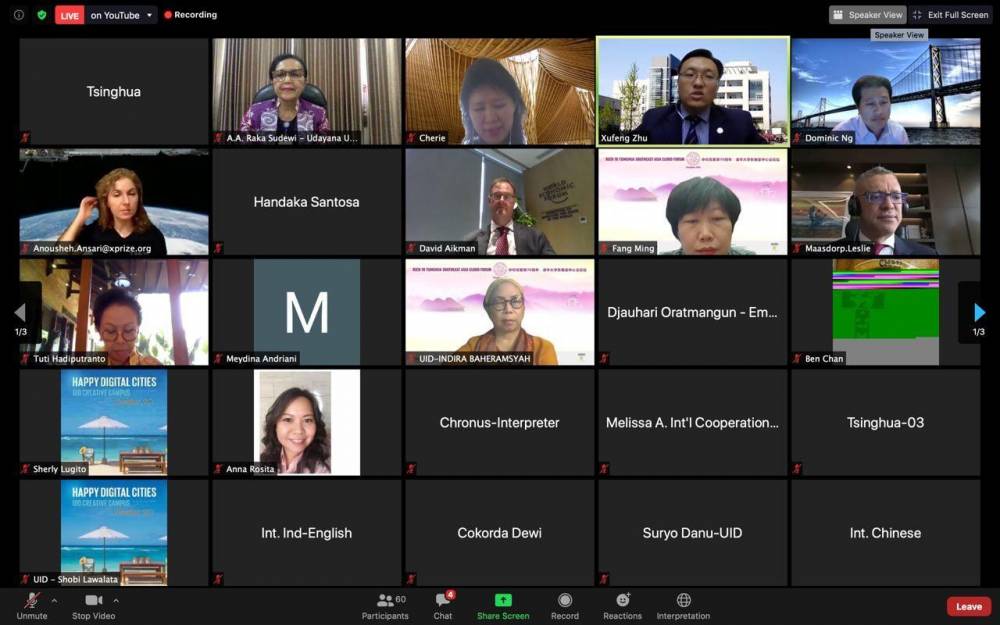 The Rector of Udayana University Prof. A.A Raka Sudewi was invited as a speaker at the SDGs Forum RICH 70 Tsinghua Southeast Asia Cloud Forum on "Investing in People Planet Prosperity for Our Future of Shared Happiness", Wednesday (23/09/2020). The event organized by the Tsinghua Southeast Asia Center (Tsinghua SEA) took place virtually. On this occasion the Udayana University Rector was accompanied by the Deputy Chancellor for Planning, Cooperation and Information and the USDI Team.

The forum was opened by the Minister of Maritime Affairs and Investment Luhut Panjaitan and presented the Chairman of the Indonesian Parliament Puan Maharani as the keynote speaker representing the Government sector.

Together with the Rector of Udayana University, present as speakers Anousheh Ansari Chief Executive of XPRIZE Foundation, David Aikman Chief Representative Officer of World Economic Forum China Office, Dominic Ng Chairman, President and Chief Executive of East West Bank and a number of other speakers from elements of international and domestic financial institutions .

In his presentation, the Rector of Udayana University conveyed that the efforts made by all countries in advancing their countries have shown us many extraordinary achievements, both physically and non-physically. Part of this development has increased the standard of living in terms of the availability of various kinds of public facilities, such as housing, water, public health, education, communication, transportation, agriculture, the food industry, shopping centers, and other public facilities that facilitate relations with each other and make life is better. However, on the other hand, various kinds of environmental and social problems are still encountered, especially in Southeast Asia, such as a lack of public infrastructure, limited public facilities, the adverse effects of human activities on the environment, poverty, fraud, human trafficking, drugs, crime, and other problems. which stem from one cause: lack of education. An interesting idea of ​​an education program to realize SDGs in Southeast Asia will greatly facilitate the long way to go in solving these various problems.
Udayana University has long experience in implementing community development programs that are centered on the realization of SDGs, such as fostering food production, improving irrigation systems, increasing the capacity of traditional villages, increasing the capacity of Mandarin for local Balinese guides. In addition, there is support from the local government in Bali for the development of "green energy" policies, affirmative policies for underprivileged prospective students to study at Udayana University, and many other community developments to realize SDGs in Bali and its surrounding areas. Therefore, this collaboration offer will increase the capacity of Udayana University to reach a wider population in realizing the SDGs target.

Ending his presentation, the Rector said that Udayana University was honored to take a position to collaborate with Tsinghua SEA to realize the SDGs target in the Southeast Asian region and hoped to strengthen the spirit to develop cooperation with Tsinghua in the future.

Supporting the Development of the Free Learning Curriculu...

The Rector Visits Construction Projects in the Unud...

2020 Rector's Meeting An Event to Convey Aspirations to...

BAN-PT conducted a Field Assessment in the Diploma IV...