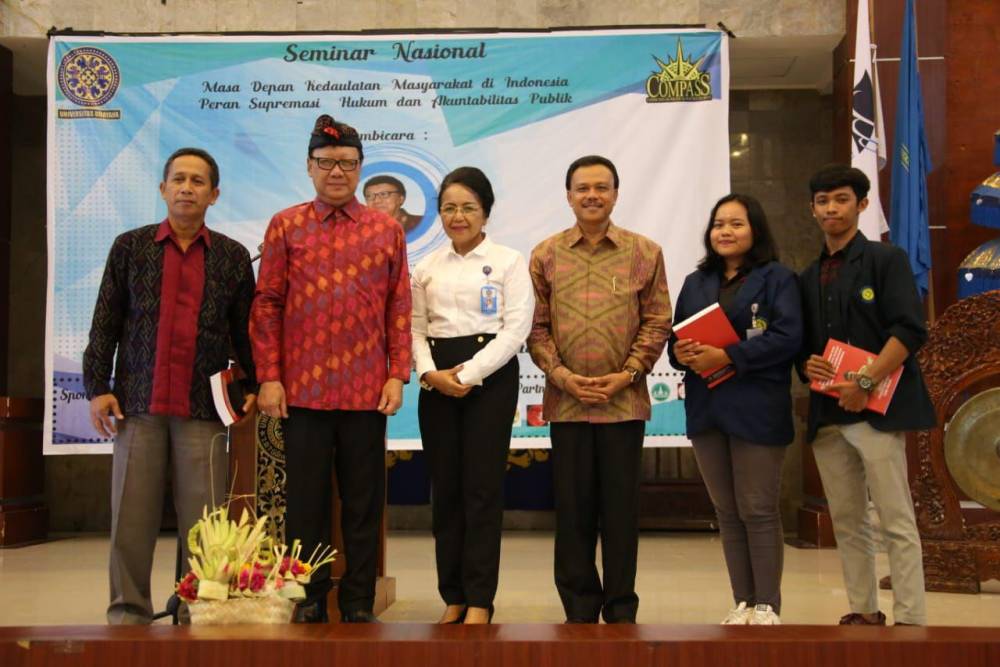 Jimbaran - Indonesian Minister of Home Affairs, Tjahjo Kumolo, was a guest speaker at the National Seminar with the theme "The Future of People's Sovereignty in Indonesia with the theme: The Role of Law Supremacy and Public Accountability. This seminar was held by the Faculty of Social Sciences and Political Sciences on Saturday (11/10) Widya Sabha Bukit Jimbaran, which coincides with National Heroes' Day, which was opened by the Rector of Unud, Prof. AA Raka Sudewi, and also presented several other speakers including ICW, LBH Jakarta and Tempo.

Rector of Unud, Prof. A.A Raka Sudewi revealed that the conditions of the Indonesian people may now be said to have progressed in the field of democracy, after the reformation in 1998. We have all received political education, both theoretically on campus and practically through general elections and from various information from the mass media. However, amid the progress of democracy it is also necessary to understand the context of the development of political knowledge and democracy itself. This is important for students who are studying in universities to be able to create an orderly society in the future.

Minister of Home Affairs, Tjahjo Kumolo in his material raised a strategic theme related to the long journey of the Indonesian state in navigating changes in development programs in accordance with the dynamics of the times and the demands of the community. The Minister of Home Affairs also said that President Joko Widodo and Vice President Jusuf Kalla had committed to carrying out the fourth paragraph opening of the 1945 Constitution, that people's sovereignty must be able to enter into the aspects of the life of the nation through the achievement of Nawa Cita. The Minister of Home Affairs hopes that academics will be able to look at the dynamics that exist to make the 2019 simultaneous elections successful. (HM)

Udayana University in collaboration with the Consulate...