Rector of Unud : In accordance with President Joko Widodo's Direction, Higher Education Becomes a Driving Motor Must Be Able to Respond to Change 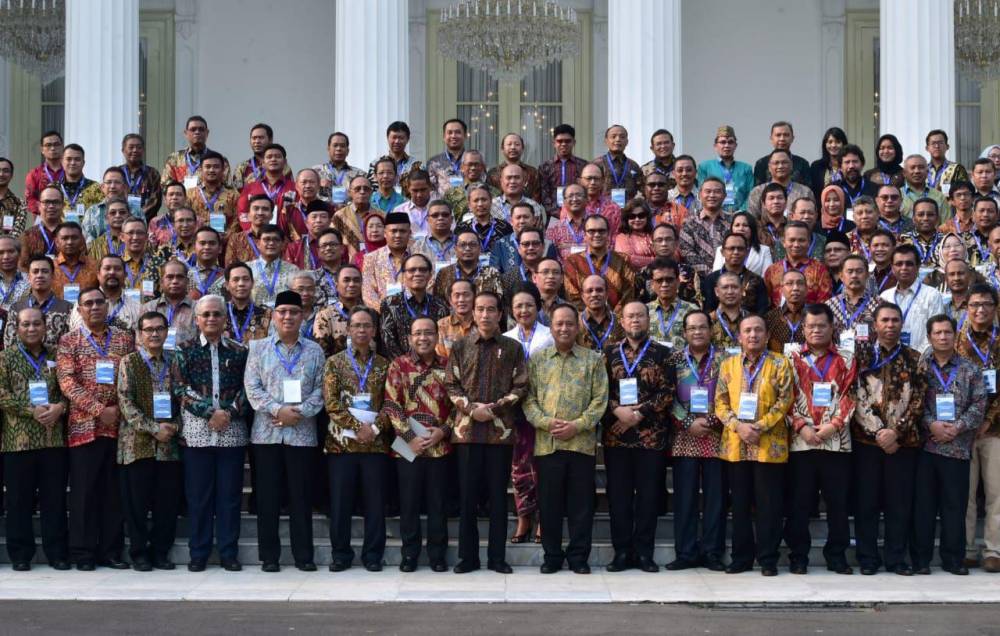 President Joko Widodo met with all Echelon I Officials, Echelon II, State University Leaders (PTN) and Heads of Higher Education Service Institutions (LLDIKTI) in the Ministry of Research, Technology and Higher Education in a meeting held at the State Palace (10/10). The Head of State expects universities to respond quickly to the times.

In his speech President Joko Widodo said that in a world that is changing rapidly like today, the speed of response is the key to winning competition and competition. "We have been in the decades and in the Menristekdikti report only three universities have entered the top 500. We must respond whether the management process is in it or other processes. If you are not ready to face changes, do not immediately fix yourself to make efficiency, you can be sure KO will face competition in a country, company or university and will be left behind by other nations, "said the President.

The President hopes the faculties and study programs are always responsive to the changes that occur. It is very surprising that the times have changed but the faculties and study programs have not changed. This has been repeated over and over, for three years, the President is waiting for his response before a drastic policy is issued. Don't just top down, President hopes there's a botton up. Echelon I and Echelon II officials in the Ministry are also expected to be able to support, lest there be a difficult process both in the filing of new faculties and study programs. Reducing regulations that make it harder for us to be more advanced, the slow ones will be left behind and the fast ones will win. The President also emphasized that the Higher Education should be able to make its alumni love Indonesia, love this country and give birth to a defender of Pancasila, which implements a people's soul, which instills integrity, morality and professionalism to build this country and build social justice for all Indonesians. The President will always monitor every response made at the Ministry and Higher Education level.

Director General of Science and Technology Resources of the Ministry of Research, Technology and Higher Education, Prof. dr. Ali Ghufron Mukti, M.Sc., Ph.D gave appreciation to President Joko Widodo for giving attention not only in infrastructure but in the future regarding Indonesia's human resources, especially the resources in the field of Science and Technology. The President has put his trust in Higher Education. "Who can respond, change, make adaptations that can then win with a speed and how to build Indonesian people who are fast and responsive to change", for that the Director General will make changes to respond to what the President has said.

Rector of Unud, Prof. Dr. dr. A.A Raka Sudewi, Sp. S (K) said that according to President Joko Widodo's direction the role of higher education is very important in responding to the rapid changes in the world related to the advancement of science and technology. Prof. Raka Sudewi greatly appreciated the direction of President Joko Widodo so that Universities / Universities would be the driving force that responded to these changes. Universities must begin to be aware of changes that are so rapid and respond to technological changes. Higher Education is the foundation of hope in making changes at a very high speed so as not to lag behind. Rector of Unud invites the entire academic community to anticipate changes in science and technology that are so rapid by working hard and synergizing so as to accelerate the achievement of the vision and mission of Unud in producing graduates who are superior, independent and cultured.

Universities must also get out of their comfort zones to be more responsive. Udayana University currently has made several changes related to governance by using a digital system, one of which is a Decree Information System in the case of correspondence so that it can more quickly find out the flow. The same thing has been applied in the field of finance and planning that has used computerized based systems. At present there is also an increase in resources by increasing the number of servers so that accessing information is better.

Human resources have also been encouraged to accelerate in increasing their duties and productivity in conducting research supported by an adequate budget to produce research that is able to provide outcomes and benefit the community and have economic value to advance the nation. This also needs support from other parties such as industry. Regarding Tri Dharma, changes will be made in accordance with developments and also will develop an e-learning based curriculum. Other supporting infrastructure such as infrastructure and laboratories are also made more adequate so as to increase the results of research at Udayana University. (HM)