WARNING IN THE 56th NATALIS DIES, THE REFERENCES ASK FOR UNUDS TO BE ABLE TO DEVELOP TECHNOLOGY INCUBATORS FOR RESEARCHERS 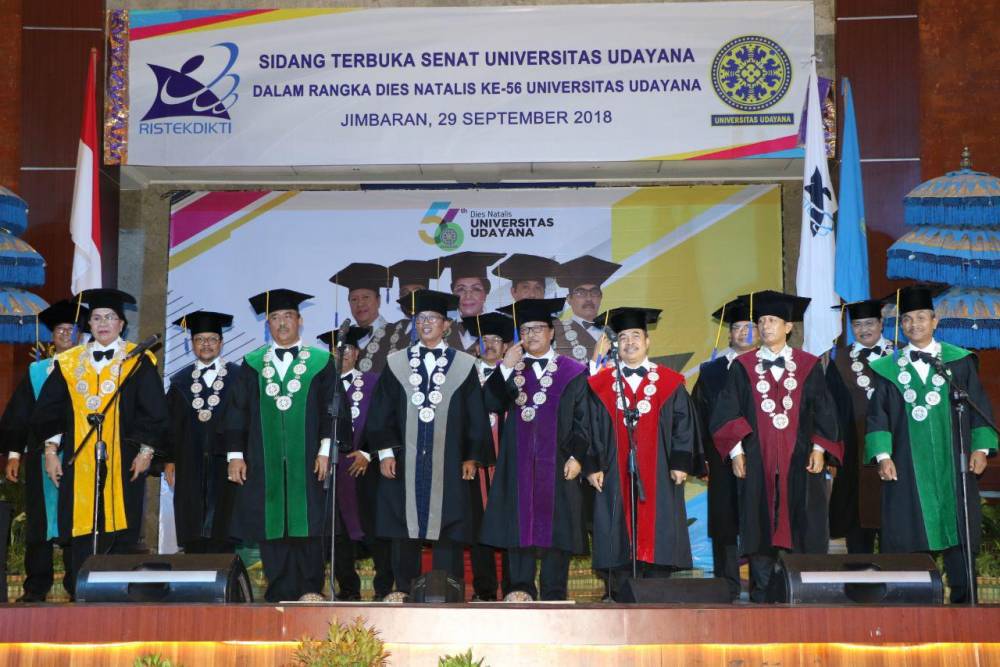 Jimbaran - Udayana University held the 56th Anniversary of the Anniversary (29/9) at the Widya Sabha Auditorium Building. "Strengthening Innovation and Research Downstreaming for Unud to become World Class University" is the theme of this Anniversary celebration. In a series of commemoration of the 56th Anniversary, various activities were held including various scientific seminars and other activities attended by the entire academic community of Udayana University, including Innovation Exhibition, Futsal Match, Football Match, LKTI Competition, Village Service Seminar, National Seminar Youth, Chess and Table Tennis Matches, Trips to Prabhu Udayana's Travel, Udayana Fair, Family Events and ended with the Achievement Award Night.

The highlight of the Anniversary this time was attended by the Minister of Research, Technology and Higher Education, M.Nasir who initiated his visit to Udayana University by inaugurating the operation of the Unud Hospital, and subsequently delivering scientific related government policies in preparing the younger generation in facing the globalization of the industrial revolution era 4.0 . Based on PricewaterhouseCoopers (PwC) 2017 data, Indonesia's economic potential in 2050 is ranked fourth in the world. For the sake of achieving economic growth, support for the development of Human Resources (HR) through higher education, which is directed to encourage graduates who are able to create jobs, through entrepreneurship (entrepreneurs). It aims to overcome structured unemployment. Menristekdikti said that in the current era of the 4.0 industrial revolution, education is very important to keep pace with social and technological innovations, such as artificial intelligence, Big Data, and the Internet of things.

Chancellor of Unud, Prof. AA Raka Sudewi in his description explained that the theme of the Anniversary this time reflects that by strengthening Unud's research innovation with the spirit to realize Unud as the National Innovation Center with the idea of ​​developing a Technology Incubator (Technology Innovation Center) as a forum for Udayana University researchers in developing and disseminating knowledge knowledge and technology so that there is a synchronization between the development of science and technology and the problems faced by the industry and the real needs of society and the state. In this container can also develop cooperation with foreign researchers. This is one of the factors that can support the achievement of Unud towards World Class University (WCU).

The highlight of the anniversary celebration was also enlivened by the appearance of the university leaders who performed the song "Happy Birthday" and the awarding of awards for outstanding lecturers and students as well as door prize and entertainment distribution of bondres. (HM)