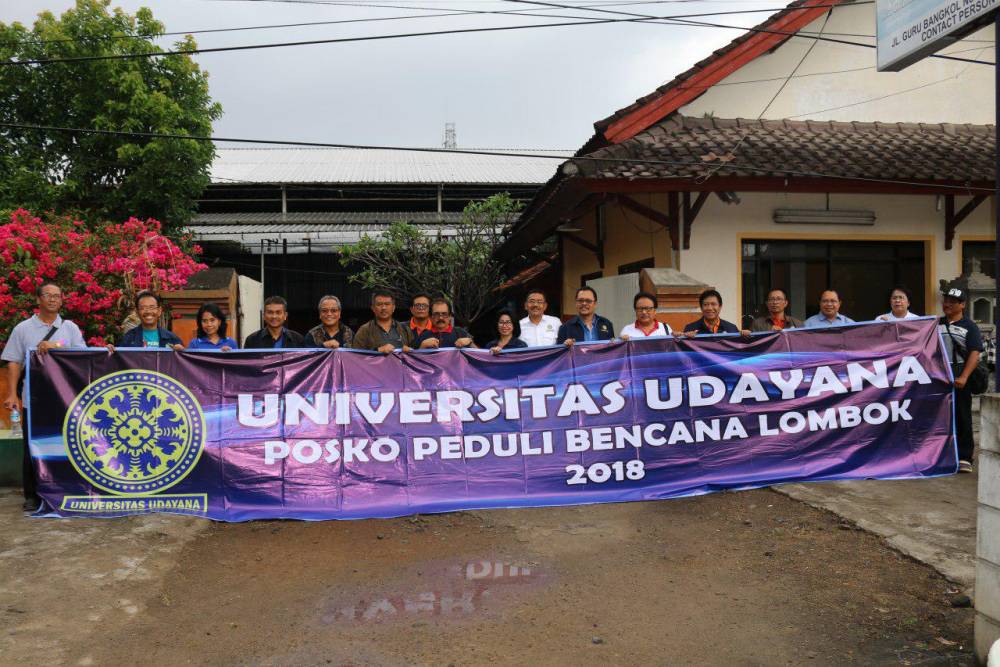 Lombok - As a form of concern for the Academic Community of Udayana University towards earthquake victims in Lombok, a fundraising event was organized coordinated by each faculty leader, and related units within the Udayana University. The aid collected has been channeled directly to the victims through the Udayana University Lombok Disaster Care Center Field Coordinator located at JL. Teacher Bangkol No. 9A Pagesangan-Mataram on Saturday, August 18 2018.

The group consisting of the Vice Chancellor, the Deans, Wadir and the Chairperson of the Institute coordinated by the Deputy Chancellor for General and Finance, Prof. I Gusti Bagus Wiksuana handed over donations in the form of money through the Coordinating Field Coordinator, Drh. Ida Bagus Windia Adnyana who is also a Lecturer at the Faculty of Veterinary Medicine, Udayana University. Furthermore, donations are expected to be distributed to the victims, considering that there are still many victims in remote areas who have not been touched by assistance. It is expected that assistance from Udayana University can be beneficial and help ease the burden of our brothers who were affected by the Lombok earthquake.

Before heading to the disaster location, the University Leader had the opportunity to meet with the Elected Governor of West Nusa Tenggara, Zulkieflimansyah at his residence to stay in touch while conveying the intention of the visit of the Unud Team as well as to convey the steps to be taken after stable conditions in addition to the possibility of collaboration between the NTB Government and Unud in the future.

The group also had the opportunity to visit several areas affected by the earthquake, including the Winner, Gunung Sari and Kerandangan to hand over assistance in the form of basic necessities, blankets, mats and tarps. From the direct observation of the location of many house buildings that had collapsed and flattened to the ground, some areas of the land had cracks, and various buildings were damaged. Most of the victims chose to stay in tents made of tarpaulin on a mat because there was still a possibility of aftershocks. Assistance from all parties is still very much needed given the large number of earthquake affected victims. (HM)