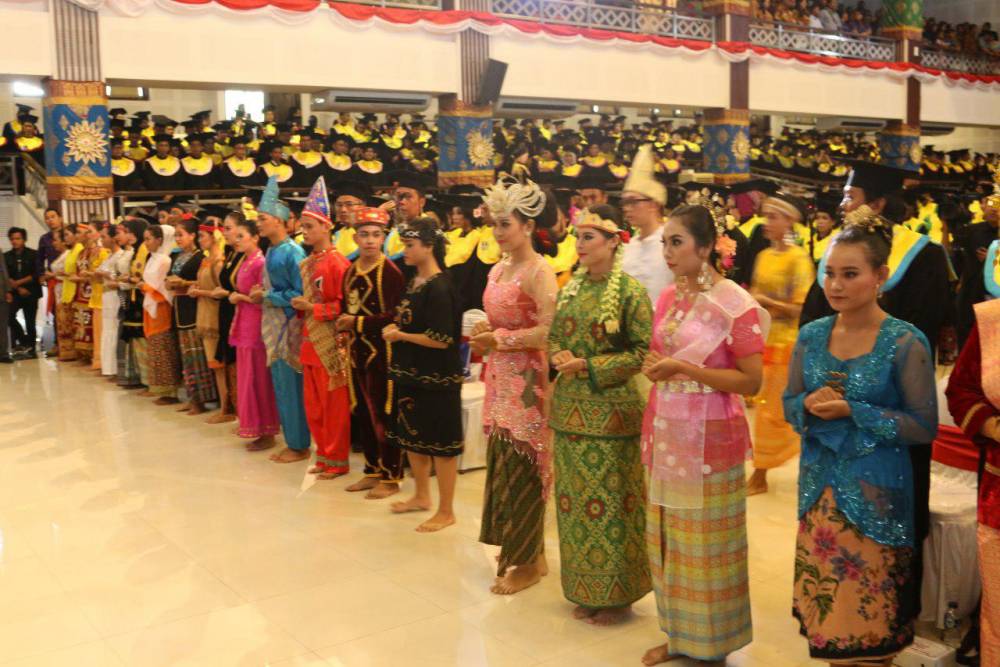 Jimbaran - Udayana University (Unud) held the 127th Graduation Ceremony, Saturday (4/8) at the Widya Sabha Auditorium Building, Bukit Jimbaran Campus. At the 127th graduation ceremony, Unud Chancellor released 1,095 graduates consisting of 165 Diploma, 601 Bachelor, 184 Professionals, 29 Specialist Doctors, 104 Masters and 12 Doctorates. Up to now, the total number of graduates of Udayana University is 86,639 people. There was something different about the implementation of the widuda this time which was enlivened by the Barisan Bhinneka Tunggal Ika Udayana University students who were wearing regional clothes from all provinces in Indonesia.

Vice Chancellor for Academic Affairs, Udayana University, Prof. Dr. Ir. I Nyoman Gde Antara, M.Eng in his report conveyed that today's graduation was dominated by women, which numbered 658 while male graduates were only 437 people. In terms of academic achievement, GPA achievements over female graduates were better than men, where the average female GPA was 3.55 while the average male GPA was 3.45. Likewise for the study period, women were shorter in their studies than men with an average study period of 6.68 women, while men were longer at 7.66 semesters. The Vice Chancellor hopes that through the education that has been taken, graduates not only master science but also have a smart life with polite and useful manners for the community.

Chancellor of Unud, Prof. Dr. dr. A.A. Raka Sudewi, Sp. S (K) in his speech said that Udayana University as an educational institution keeps on improving to produce graduates who are professional, superior, independent and cultured. In this context, Udayana University intends to create graduates with high intellectuals and able to compete and have high ethics and morals. At present the university also strives to encourage the faculty to motivate students to graduate on time considering the period of study has an important role in assessing the quality of graduates. Udayana University has also conducted an internationalization program through the formation of several Study Programs to take part in international certification such as AUN-QA so that graduates receive recognition not only at the national level but also at the international level.

Through the Institute for Development, Learning and Quality Assurance (LP3M), Udayana University continues to improve to ensure the quality and quality of graduates through improving the quality of human resources (HR). One of the things that has been done is to carry out Learning Training for Higher Education Curriculum (P2KPT / PEKERI-AA) for lecturers in an effort to improve competence, especially in terms of lectures. On the other hand, amidst the high demands of society for the realization of a transparent bureaucracy, accountability, free from corruption and nepotism (KKN), bureaucratic reform is something that must be done by government agencies including at Udayana University. Bureaucratic reform is the first step to structuring a good, effective and efficient governance system so that it can serve the community quickly, accurately and professionally.

Therefore, Udayana University is committed to implementing bureaucratic reform through improved governance in building the Integrity Zone Towards a Corruption-Free Region and Clean and Serving Bureaucratic Areas. The initial step taken regarding improvements in governance is to prepare several services and renew with risk-based management and ISO 9001: 2015 certification.

To the entire academic community and alumni of the Udayana University, the Chancellor hoped that together they would shoulder to shoulder with sincere intentions and a high spirit of service to improve the quality of Udayana University in printing graduates who would later play a major role in the nation's journey. (HM)