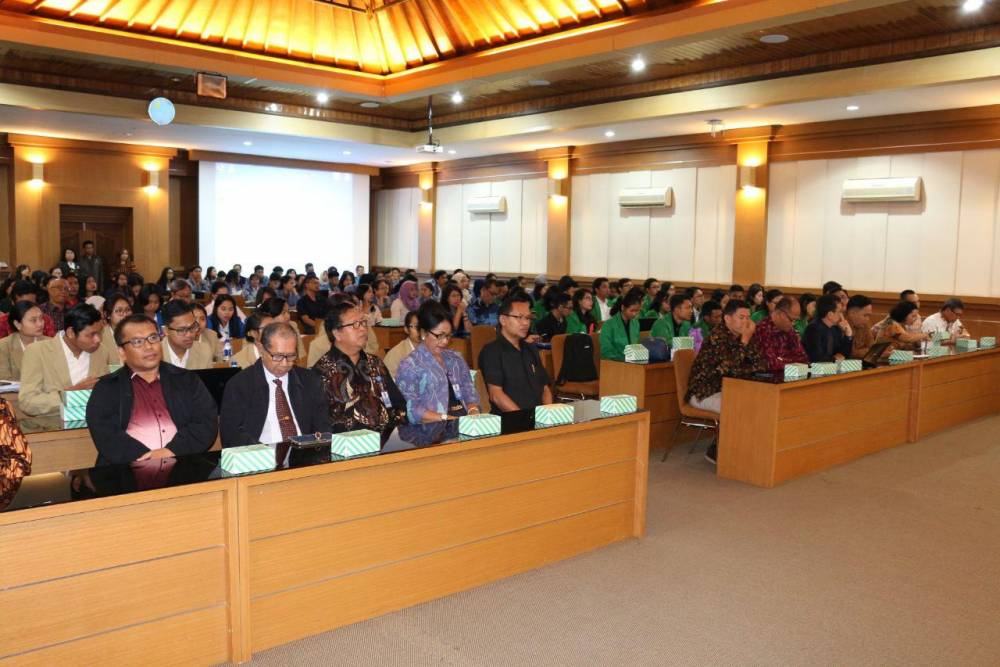 Denpasar - Udayana University hosts the Execution Monitoring Evaluation (Monev) of the Student Creativity Program (PKM) External 2018. Monev is conducted by the Kemenristekdikti Monev Team consisting of Dr. Mystaram and Dr. rer.nat, and I Wayan Kariyasa, M. Sc lasted for two days (16 -17 July 2018) at Postgraduate Building of Unud Kampus Sudirman Denpasar. The number of groups that was monitored by 65 groups coming from PTN / PTS in Bali and from that number from Universitas Udayana amounted to 28 groups.

Rector of Unud, Prof. Dr. dr. A.A Raka Sudewi, Sp.S (K) in his speech at the opening ceremony delivered the PKM aims to improve the creative, innovative, visionary, solutive and independent academic climate. Besides, the aim of PKM is also to improve the quality of students in Higher Education so that later become members of society who have academic and / or professional ability that can develop, apply and disseminate science, tekonlogi and / or art and enrich national culture. To ensure the quality of the implementation of PKM 5 field activities, the Directorate General of Learning and Student Affairs will conduct assessment of the implementation of activities through monitoring and evaluation, in which each title of PKM is assessed by 2 (two) national reviewers.

Implementation of the monev this time is the stage of the process to the 4 of the 5 stages of PKM activities, which will be expected PKM in accordance with the field that has been implemented and will be able to compete in the National Student Science Week (PIMNAS). The implementation of PIMNAS is the last step of PKM implementation and as a forum for students to present, communicate with each other through national intellectual creations products. The Rector advised Udayana University students whose PKM has escaped funded to actually carry out their activities in earnest in order to perform in PIMNAS.

As a form of commitment to advance PKM in Udayana University, one of the efforts that has been done is to establish Udayana Student Creative Center (USCC) which carries out all matters related to the implementation of PKM covering administration, direction, monev, and preparation of PIMNAS. Not only that, the university also has support funding, capacity building of lecturers through TOT as much as 600 lecturers and followed by training of proposal preparation for students with target of 600 students in year 2018. University also give appreciation for PKM winner in PIMNAS event through giving incentives for lecturers and students. The Rector hopes that with this activity many PKM Unud will qualify and become the winners in PIMNAS so as to have an impact on improving the rank of Student Affairs nationally. (HM)