MESSAGE OF MINISTER OF TRADE IN FRONT 1.222 CANDIDATES WUDUDAWAN UNUD 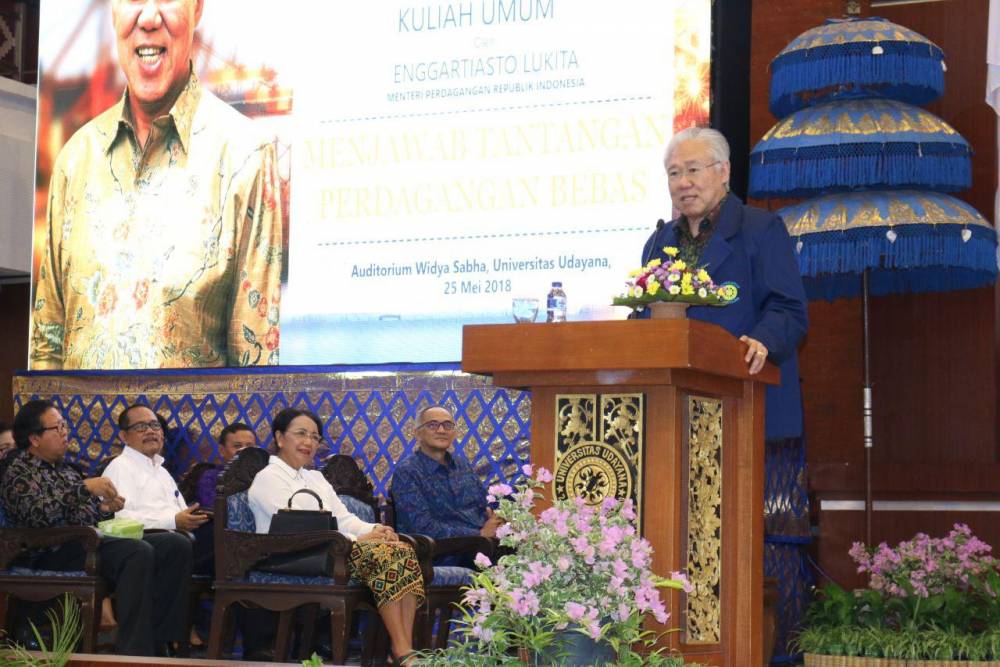 Jimbaran - Pre Graduation this time is different from before with the presence of the Minister of Trade of the Republic of Indonesia Enggartiasto Lukita at Udayana University on Friday (25/05/2018). The presence of the Minister at the Auditorium Building of Widya Sabha Campus Bukit Jimbaran in order to provide Public Lecture opened by Udayana University Rector Prof. Dr.dr. A.A Raka Sudewi and attended by 1,222 graduates who will graduate on Saturday (26/5). Also present at the occasion were Vice Rectors, Deans, Heads of Institutions and Head of Bureau within Unud.

In his speech, Prof. Raka Sudewi expressed his hope that through this general lecture the candidates of the graduates get enlightenment and new spirit to face the challenge of free trade. Acting as moderator in this event, Director of Business Management Board of Udayana University, Sayu Ketut Sutrisna Dewi.

In his speech, the Minister of Trade of the Republic of Indonesia, Enggartiasto Lukita insists that free trade and openness can be a way to move forward and compete with other countries. "In accordance with the direction of President Joko Widodo, Indonesia should not be left behind from other countries, both in terms of exports and economic growth. We can go ahead by opening ourselves up and benefiting from free trade agreements as compared to other countries. By opening up, we also open opportunities to grow and increase economic growth, "said the Minister of Trade. To deal with the entry of outside products from free trade, we must be able to improve the quality of domestic products and keep prices competitive in order to compete with outside products. "Thus, we can meet the domestic market with domestic products as well as export. We should not only be a market for foreign countries, but also can market out, "explained the Minister of Trade. At the end of the public lecture, the Minister also gives a message to prospective graduates that the key to being forward is to never think for instant and keep commitment. "On the way, our commitments will be tested and we must be able to hold our own commitments," he said. "We need the best sons and daughters of Udayana University to help advance the country. Let's do the best for this nation, "added the Minister.