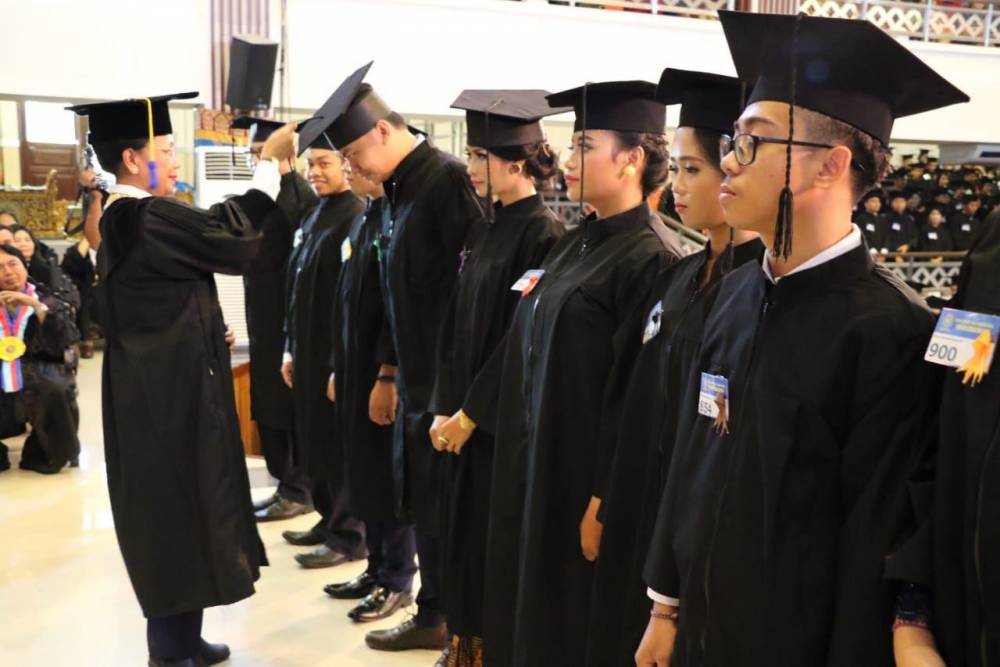 Prof. Dr. Ir. I Nyoman Gde Antara, M.Eng, Vice Rector for Academic Affairs Unud, in his report delivered the graduation today is the same as the previous graduation dominated by women who numbered 687 people, while the graduation of men amounted to 535 people. In terms of academic achievement, the GPA of female graduates is better than men, where the average female GPA is 3.55 while the average GPA of men is only 3.41. This shows that the academic ability of men is still below the women. Prof. Dr. Ir. I Nyoman Gde Antara, M.Eng hoped that through the education that has been taken, the graduates not only master the science but also the smart living with a polite manners and useful for the community.

Rector of Unud, Prof. Dr. dr. A.A.Raka Sudewi, Sp.S (K) in his speech said that Udayana University as an educational institution is keen to clean up to produce professional graduates who are excellent, independent and cultured. Currently the University seeks to encourage faculty to motivate students to graduate on time considering the study period has an important role in the assessment of the quality of graduates. Udayana University has also undertaken an internationalization program through the development of several Study Programs to follow international certification such as AUN-QA so that graduates receive recognition not only at the national level but also at the international level. Udayana University continuously strives to provide students with various soft skill activities. This is one of the concrete steps that have been done through Entrepreneurship and Career Development Center and Business Incubator Udayana University. It is also a concrete step that Udayana University has made for graduates to not only become Job Seekers but also to become Employers of Employment.

Tracer Study is one of the university's efforts in obtaining feedback from alumni for the improvement and development of quality and education system. It has also been implemented at Udayana University. Feedback is useful for universities in mapping the business world and industry so that the gap between the competencies acquired alumni during college with the demands of the world of work can be minimized. On the occasion, the Rector also appealed that graduates who will be alumni of Udayana University can participate in the implementation of Tracer Study in an effort to realize Udayana University is superior, independent and cultured.

At the end of his speech, the Rector invited the graduates to jointly play a role in combating radicalism in order to maintain the unity of NKRI, where some time ago the Indonesian people, especially those living in Surabaya City, were rocked by bombs that claimed some lives. Entering the Election of Simultaneously,including Bali which will conduct the election of the new Governor and several regional heads at the district / city level, the Rector also appealed to be a good citizen, to exercise the right to vote and choose the best leader according to conscience, and take an active role in realize a secure, comfortable, and peaceful Pilkada.(HM)