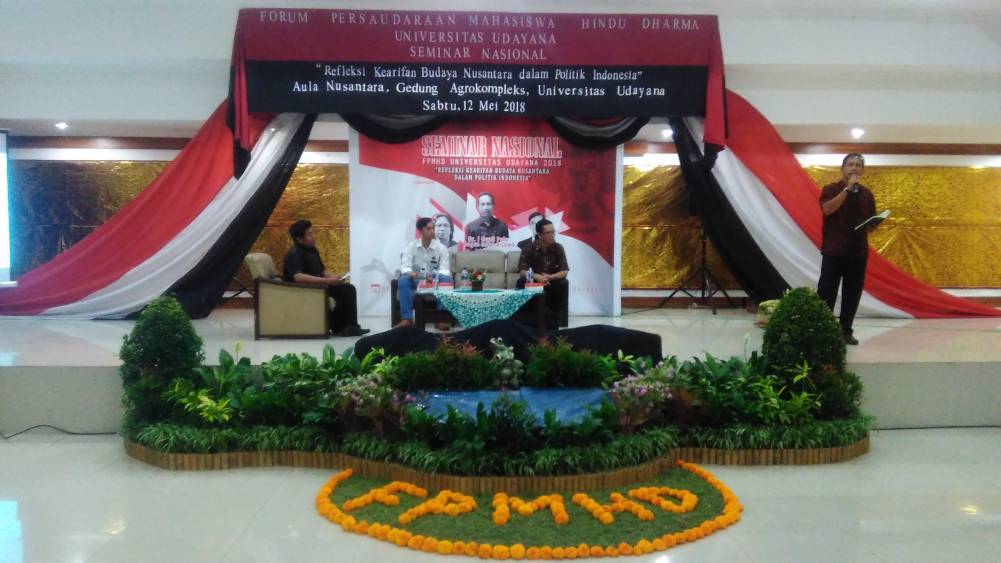 Dr. I Gusti Putu Bagus Suka Arjawa was giving his seminar material in The National Seminar of Udayana FPMHD 2018

The activity started at 9.30 AM by presenting three speakers, namely Dr. I Made Suparta, M.Hum. (a Lecturer of Faculty of Cultural Sciences University of Indonesia) who brought material about cultures, then continued by Dr. I Gusti Putu Bagus Suka Arjawa (the Dean of Faculty of Social and Political Sciences Udayana University) with material about politics. The third speaker in this activity was I Gusti Putu Kirana Dana, SH. (the Chairman of PD KMHDI Bali who brought the material about the role of youth. Then the activity continued with a discussion session between the speakers with the participants of the activity.

Participants in this activity amounted to 50 people who are students from various campuses. The committee of 49 people has prepared this activity since March. I Kadek Puja Ardika, chairman of the committee in this event expressed his happiness because this activity run smoothly in which it previously had experienced several obstacles. "I hope this activity, like this, next year will be done by taking a more interesting theme or maybe by taking the problems in the society to be solved together", he said. (fai)