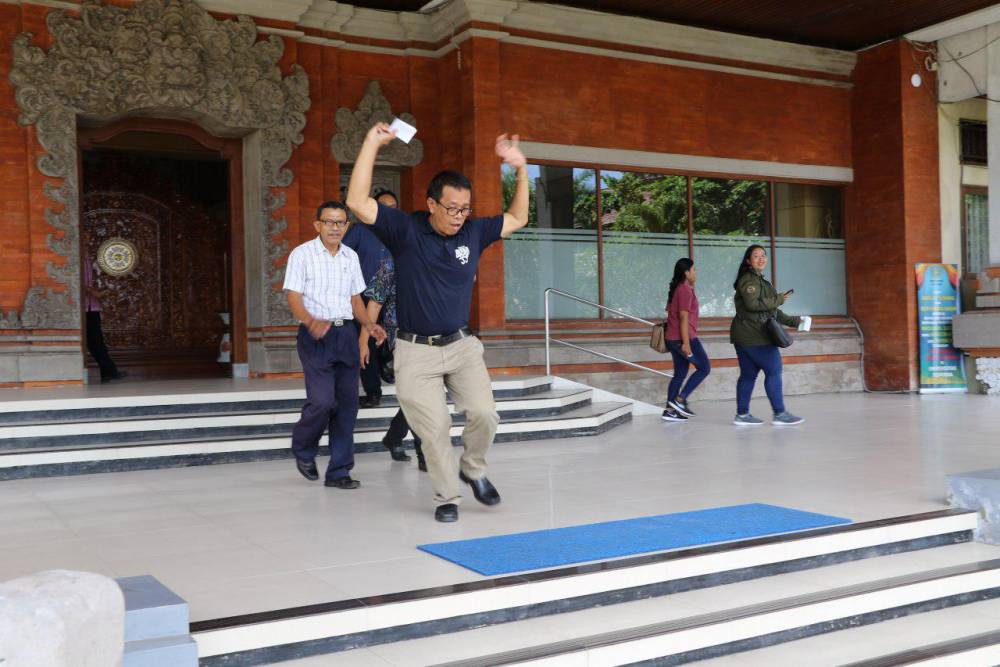 Udayana University participates in simulation activities in an effort to build awareness and awareness of the community, especially Udayana University's academic community towards disaster by building the participation of all parties. Implementation of the simulation is marked by the sound of early warning siren that was done at 11.00 pm and when the siren sounded the residents of the Rectorate from the elements of leadership, staff, lecturers and students who visited scattered out to the safe zone located in the Rectorate Building area.

Rector of Unud, Prof. Dr. dr. A A. Raka Sudewi, Sp.S (K) who participated in the simulation conveyed this activity is the first time held at Udayana University. This activity is very good, considering we do not know when the disaster happened and this activity is intended to anticipate if a time of disaster so that can reduce risk and improve safety. Unud also has a Center for Disaster Studies under the auspices of LPPM who have participated in the eruption of Mount Agung disaster, therefore the Rector hopes that through this simulation can reduce the likelihood of casualties in case of disaster in the campus environment.

Head of UPT Center for Disaster Management Control BPBD Bali, Agus Tangkas convey the simulation held at Unud is expected to be implemented also by all other circles. The simulation conducted at Unud this time is in the framework of the earthquake, considering the earthquake a few years ago, many staff were less alert in facing earthquake. With this simulation is expected will not happen panic if existence of same disaster happened in environment of Rectorate of Unud.

Furthermore, national targets are also being simulated in various places with targeted participants of 25 million people involved in simulation activities. Every April 26th that coincides with Disaster Preparedness Day, Bali Provincial BPBD will sound an early warning siren as a test medium and remind the public to always standby to attend disaster. In Bali Province, there are 9 points of early warning siren, one of which is in Nusa Dua. (HM)