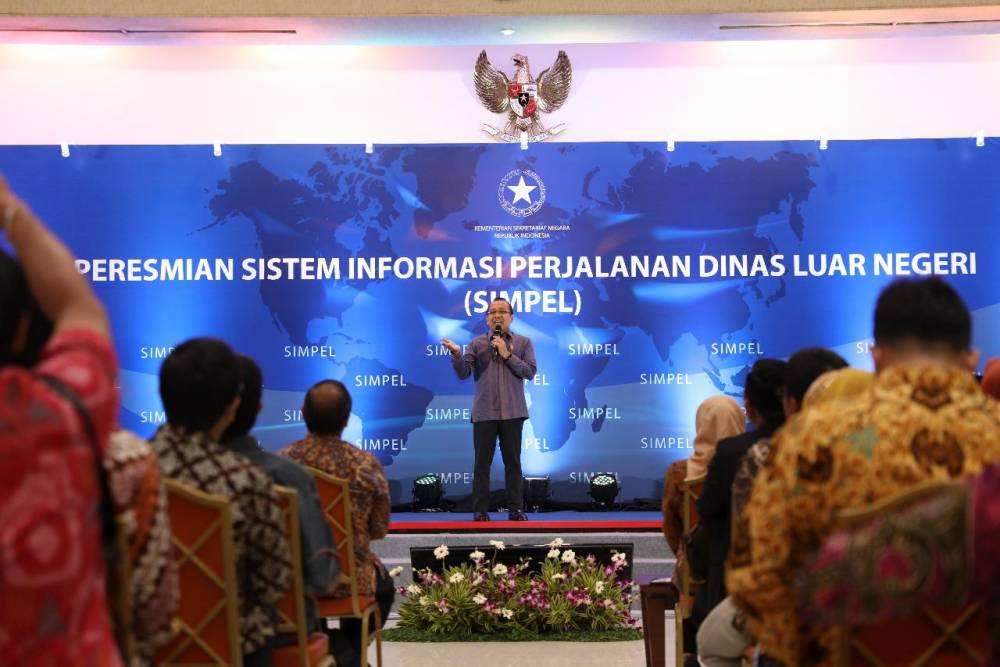 SIMPEL is an online licensing application developed in the framework of improving the quality of public services in the issuance of government approval letter on foreign official trip (PDLN) carried out by State Officials, other Officials, Civil Servants, State Owned Enterprises / BUMD and Tenaga Indonesia assigned by State Institution or Government Agencies, funded by APBN / APBD as well as by technical cooperation partners.

In his speech Minister of State Secretary, Pratikno, said that SIMPEL application development is not limited to the process of digitizing the working mechanism which has been done manually changed into electronic process, but also accompanied by the effort of debirokratisasi by simplifying the business process of handling the administration of the foreign service trip.

Furthermore, the Minister of State Secretary also said that in the future the SIMPEL application will be continuously developed to improve the quality of foreign travel licensing service. Further development will, among other things, be done through further study of SIMPEL's business processes and possible service acceleration by utilizing Artificial Intelligent / Machine Learning.

SIMPEL's development is one of the efforts undertaken in improving the effectiveness of foreign travel services. The presence of SIMPEL is not limited to efforts to improve the quality of the PDLN licensing services that is fast, transparent, accountable and accessible, but also comes with features that can simplify the process of monitoring the effectiveness of PDLN implementation. These features include executive dashboard to perform trend mapping PDLN implementation. It also provides a report submission feature of the implementation of PDLN through a standardized online form in order to facilitate the process of effectiveness analysis of the implementation of PDLN.

The presence of SIMPEL is expected to improve the foreign travel licensing governance system, so that every rupiah spent by the government to finance foreign service trips in various international forums can provide maximum benefits for development.