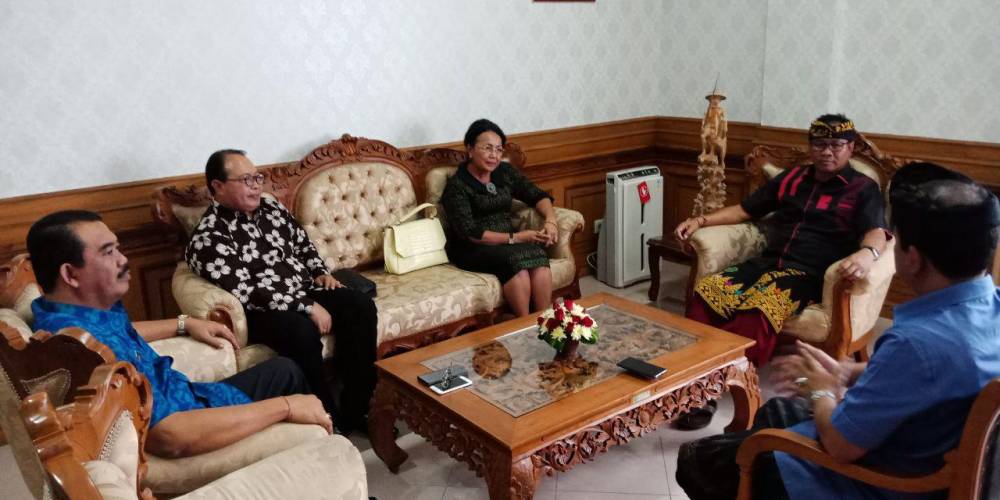 Mangupura - Udayana University Rector accompanied by Vice Rector for Planning, Cooperation and Information held a meeting with Vice Regent of Badung on Thursday (08/03/2018) at the Office of Research and Development Agency (Balitbang) Badung Regency. The meeting was also attended by Head of Balitbang and Head of Licensing Office of Badung Regency.

Vice Regent of Badung, Drs. I Ketut Suiasa, SH stated that the purpose of the meeting is to discuss the cooperation of land use to support tourism in Badung, which will be implemented through the management of waste by building the Garbage Bank in the campus area of ​​Unud, since there is still a lot of vacant land around Udayana University campus which can still be utilized. Other cooperation that will also be collaborated is the construction of Fire Post, considering the number of buildings in the campus area of ​​Unud. The construction of the Fire Post in Udayana University campus area is needed to support the firefighting post in Nusa Dua and Pecatu, in this case Badung District Government asked Unud Party to prepare the land and Badung Regency will support with its facilities and infrastructure. In the future the Vice Regent also has plans to revive the Forest Unud Campus as a tourism area, by following up the MoU on both sides, through the activities of campus forest cultivation and maintenance.

Rector of Unud, Prof. Dr. dr. A A. Raka Sudewi, Sp.S (K) welcomed and appreciated the offer of Vice Regent of Badung considering the amount of land that owned by Unud which has not been utilized properly. Disadvantage / unused land, the rights will be taken by the central government. Seeing the location of Unud located in Badung, the Rector hopes the cooperation of both parties can be realized, therefore the Rector will follow up the Vice Regent's wishes by referring to Standard Operating Procedure (POB) of Asset Cooperation which has been prepared and is in the stage of requesting permission from Kemenristekdikti. (PR)