REJECTING THE REVISION OF MD3 LAWS, STUDENTS’ EXECUTIVE BOARD ALLIANCE OF BALI HELD A PEACE ACTION 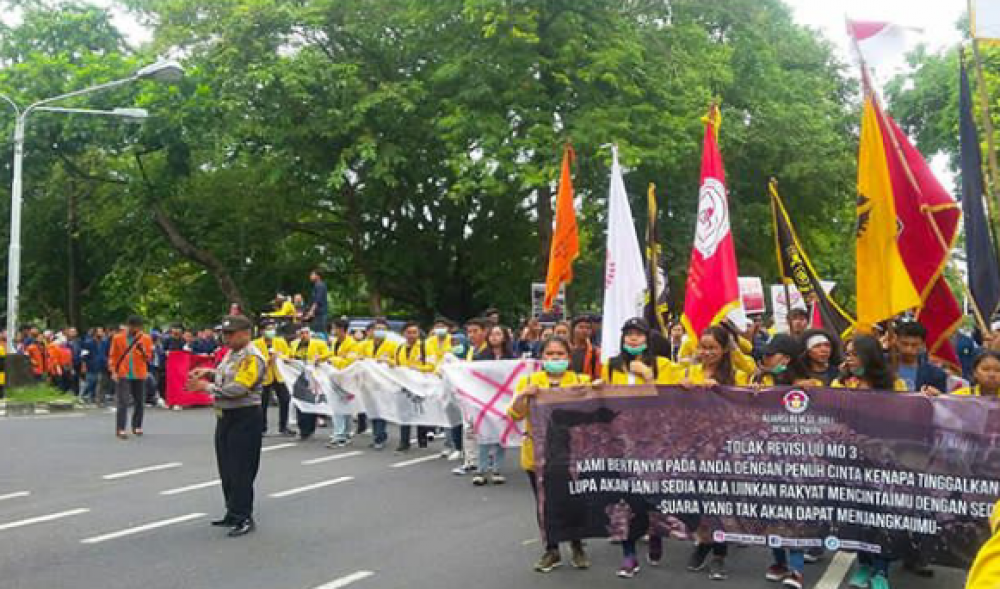 Denpasar - Friday (23/02), a number of students who are members of the Joint Alliance of Students’ Executive Board (BEM) or the Dewata Dwipa BEM of Bali, held a peaceful action in front of Bali Legislative Office as a form of rejection toward the revision of MD3 Laws which is considered to have betrayed the essence democracy. The action attended by 300 students from four universities such as Udayana, Universitas Pendidikan Nasional, Bali State Polytechnic, and Educational Institutes in Bali was held at 1.00 PM.

It is not only limited to delivering speeches; the intent of this peaceful action was to meet one of the representatives of the Bali Legislatives. But the plan failed because the legislative figure that the students’ wanted to meet was not at the office.

"Actually we want to meet the legislative, but it was the staff coming out and said the legislative was not in the office at the time. It was unfortunate that we could not enter the office, only 5 representatives could. " Rifki, one of the participants of the peaceful action, said.

Finally, the representatives from Students’ Executive Board Alliance of Bali submitted several demands to all members of the legislatives, which contain: First, the rejection of the existence of Law number 17 of 2014 which revised in article 73, 122 k, and article 245 which supports the House of Representatives to become a super power and provoking biased meaning. Second, the Provincial Legislative Council of Bali to reject the revision of the MD3 Laws, because it against the values of Pancasila and injured the 1945 Constitution article 28E paragraph (2) and (3). Third, is  demanding the government in this case of President Jokowi to reject the ratification of the Revision of the MD3 Laws. Fourth, is demanding the Indonesian Republic’s House of Representatives to revitalize the position of the MPR (People's Consultative Assembly), DPR (People’s Representative Council), DPD (Regional Representative Council) and DPRD (Regional People's Representative Councul) to be in conformation with the constitution. And the fifth, is demanding the government to do a transparency of bureaucracy without reducing democratic values by not making changes to laws privately. (Ism)