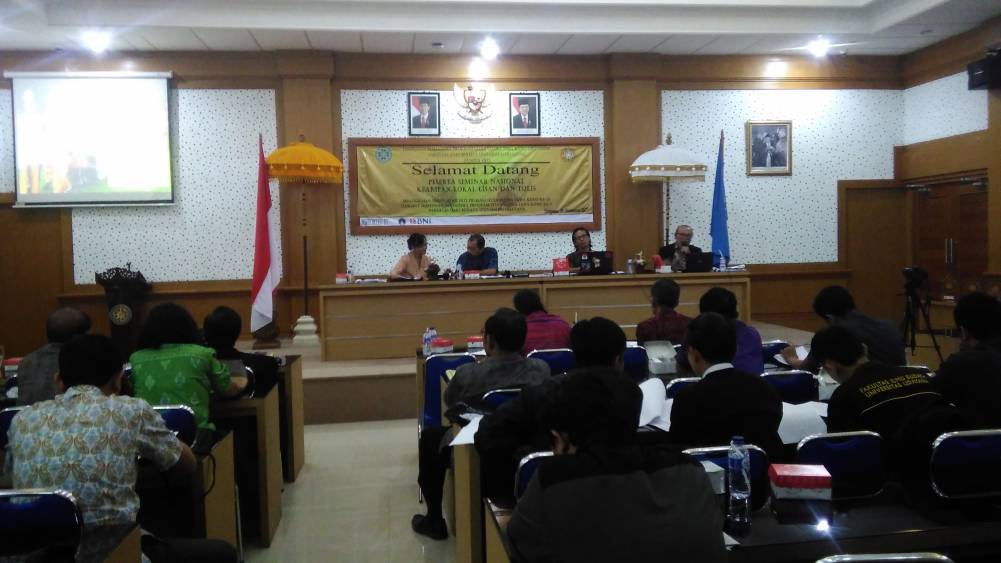 Denpasar – Saturday, 25 November 2017 The Ancient Javanese Student Association held the National Seminar on Oral and Wise Local Wisdom. This activity is held to commemorate the 59th Anniversary of the Literature Program of Ancient Javanese and the 7th anniversary of the Association of Javanese Students. The theme taken is "Exploring the Tolerance and Diversity Value of Oral Tradition and Writing Nusantara". The seminar was held in Ir. Soekarno Purbatjaraka Building Faculty of Cultural Sciences Udayana University Jl. Nias Island No. 13 Denpasar. The background of the holding of this activity is considering the current issues that can make the conflict in the community or NKRI, so it needs to lift the tolerance and diversity of local wisdom to be able to cope with the problem.

Prof. Dr. Luh Sutjiati Beratha, M.A. as the Dean of Faculty of Arts Udayana University officially opened this activity, then continued with the cutting of cone to commemorate the 59th Anniversary of Literature Program of Ancient Java and the 7th anniversary of the Association Javanese Students. After that, the core event was a national seminar filled by three speakers. The first speaker was Dr. Drs. I Made Supartha, M.Hum. from the University of Indonesia with the material "Toggle the Essence of Tolerance and Social Transfomation Concepts in Ancient Javanese Thinking: A Small Note of Eschatological Wisdom of Merbabu-Bali", followed by Dr. Sri Ratna Sakti Mulya, M.Hum from Gadjah Mada University who brought the material entitled "Digging Tolerance Value from Scriptorium Pakualaman Scriptorium". The third speaker was Prof. Dr. I Wayan Suka Yasa, M.Si. from Hindu University of Indonesia with the material "Digging Tolerance and Diversity Value in Lontar Literature of Ancient Javanese".

This activity is the first time implemented byJavanese Student Association with the help of Balai Preservation Cultural Value of Bali and Nusa Tenggara Region. The participants who participated in this activity amounted to 46 people consisting of students, lecturers, and general. Ida Bagus Made Ari Segara, the chief executive of this event, was very impressed because the first national seminar was held in the Old Javanese Literature Study Program. (fai)