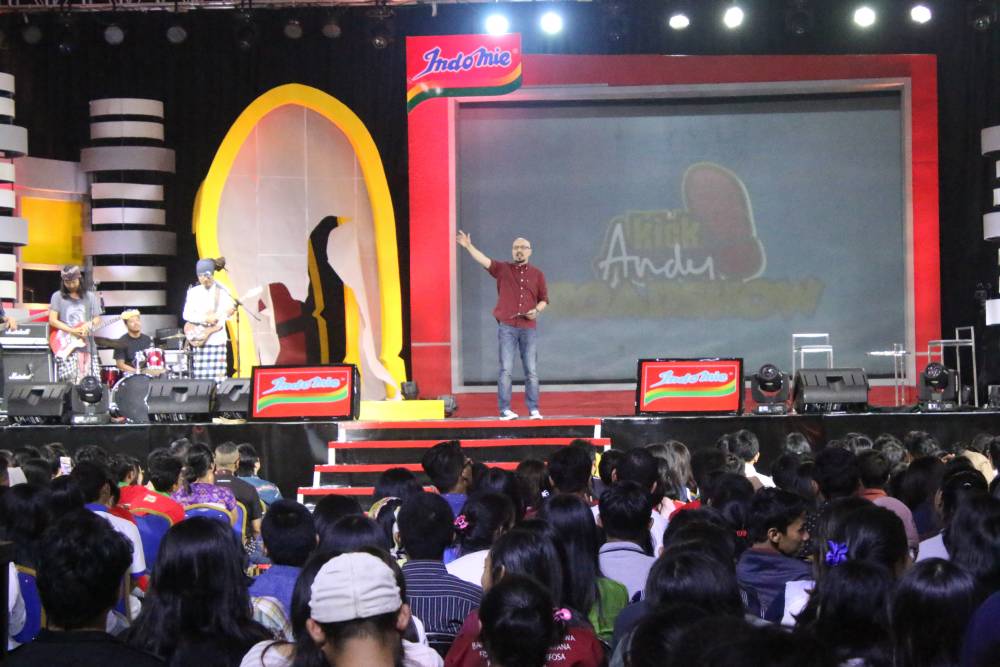 On the first day, Thursday, October 12th, 2017, around 14:00 WITA, the activity of Metro TV On Campus at Udayana University was opened with a speech by Prof. Dr. dr. A A. Raka Sudewi, Sp.S (K) as the rector of Udayana University. 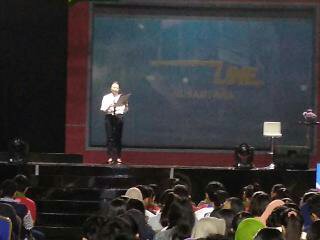 After the opening speech by the rector of Udayana University, the activities continued with the first core of Newsline Nusantara event. The first event was divided into two session activities. In the first session, this event invited two community representatives who have a role in helping refugees of the current disaster status victim of Mount Agung. Both community leaders are Indra Lesmana and Gek Ni Luh Jelantik.

Then in the second session of newsline archipelago, the event hosted by the Marvin Sulistio as the presenter who invited three figures who provided the information about the history of Mount Agung, especially during the eruption of Gunug Agung in 1963. The three speakers includes Mrs. Ngurah Rai and Mr. I Gede Sudira who are the two local community figures who also felt the incident of volcano eruption of Mount Agung in 1963 and the third speaker is Prof. Dr. Ni Luh Sutjiati Beratha, M.A. as the Dean of the Faculty of Cultural Sciences Udayana University who explained about the philosophy, beliefs of the people of Bali, as well as the social and cultural values of Balinese people and also explained the history of the eruption of Mount Agung in 1963.

After the end of 'Newsline Nusantara' around 16:00 WITA, Metro TV On Campus activities were continued with 'I'm Possible' which was guided by the motivator Merry Riana. In the event entitled "Increase Determination To Continue Spirit" was trying to provide motivation to reach the dreams to thousands of Udayana University students who were presented at the site. In this one hour and fifteen minute event, there were invited two guest stars who shared their experiences with achieving their dreams. The two guest stars were Balawan and Indah Kalalo. Both guest stars were the public figures of Indonesia who work in the entertainment world of our homeland.

In the series of 'I'm Possible' event, Merry Riana as the host and motivator gave the key to the students to be able to achieve the dream. One of the key among them is to strengthen the determination based on goals, energy, consistency, action, and prayer. In addition Merry Riana also provided the input to students to continue to instill the word 'I must be in each of the participants themselves'. It refers to the strengthening of willpower in reaching dreams even though obstacles always come. It is also added by Indah kalalo who gives a statement if the storm must pass that means obstacles will surely pass.

On the second day of 'Metro TV On Campus' on Friday, October 13th, 2017, the event which was held in there was Kick Andy Roadshow. The event that was guided by Andy F. Noya this time took the theme of "We Young We Care". On the second day of this event started the same as the first day of Metro TV on Campus activity that at 14.00 WITA. The event was divided into three sessions with three guest stars. The three guests are Leni Agustin who is a young Indonesian fashion designer, Buleleng Social Community (Buleleng Social Community), and Navicula Band Group.

Leni Agustini, who is the first guest star in the show, is a woman from Surabaya. She is a fashion designer. Leni is a young fashion designer from Indonesia who dared to create a unique creativity in the field of fashion. Leni's works that have been recognized by fashion lovers are more focused on traditional Indonesian cloth that is trying to be transformed into modern clothes. The social value that can be drawn from Leni when explained in the shown is when Leni travels around Indonesia to look for traditional Indonesian traditional fabrics, she always takes the time to give short teaching to the fabric craftsman she meets. In addition, amid the bustle of his profession as a fashion designer and manage hes boutique, until now Leni recorded has 200 craftsmen fabric and 80 craftsmen accessories get help and coaching from it.

At the end of the first session, Leni advised the students and participants of Kick Andy's event that the younger generation would like and appreciate their own diverse Indonesian culture. In addition, Leni also advised that students are always confident with what she has done.

The second guest star is Buleleng Social Community. The community formed on 27th of June 2015, which is a community engaged in the social community. By having hundreds of volunteers who are on average are young people and workers, this community moves on the basis of sincerity to help fellow human beings regardless of tribe or religion. In addition, in helping the economic life and community activities, this community also focuses on several other areas such as education for children and health. For the education of children, this community has so far been recorded to have 50 foster children who were given assistance to continue their education. As for the health sector, this community has professional volunteers as doctors who will assist in doing health socialization in the community.

And the last guest star in the Kick Andy, which is a Bali Band Group called Navicula. The band was formed in 1996 and has the color of rock music has personnel who as a whole background as an environmental activist. In an answer to an interview question by Andi F. Noya, the representative of Navicula Band gave an explanation when the band was formed to try to campaign on environmental and social issues using the music media. According to them, the current development should not forget the conservation of nature as well. (pratama)