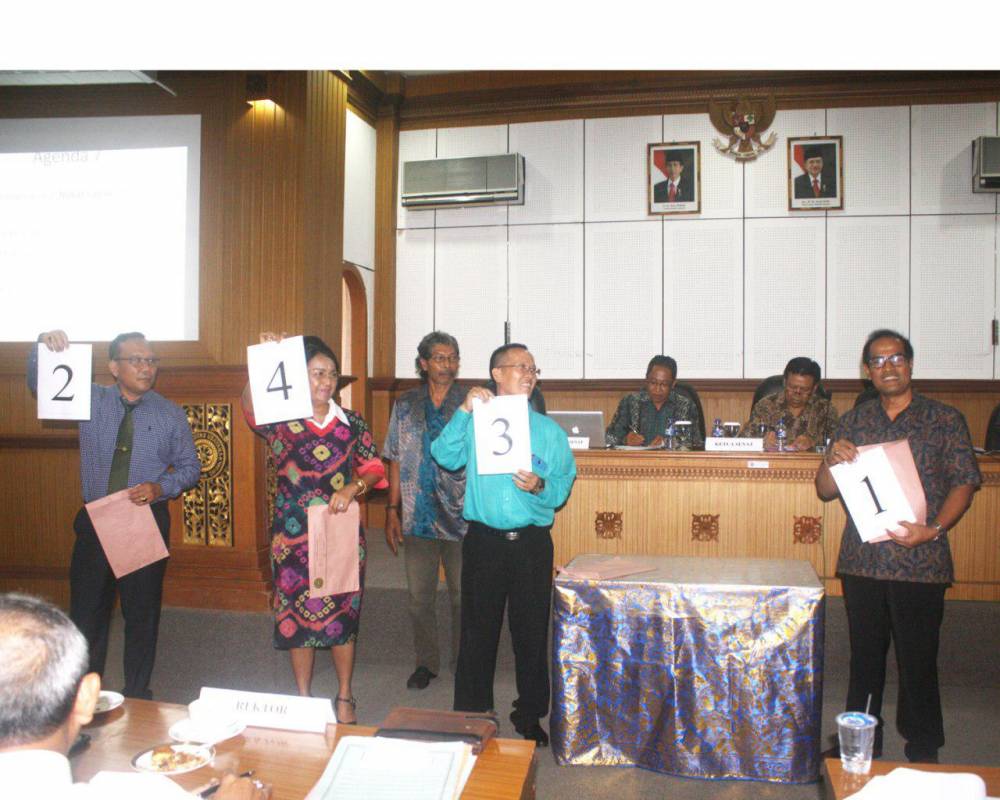 Bukit Jimbaran - Senate Udayana University held a Meeting of Rector Candidate for the period of 2017-2021, Monday (29/05/2017) in Ruang Nusa Rectorate Building Bukit Jimbaran Campus. The meeting was chaired by the Chairman of Senate Unud Prof. Dr. Ir. Dewa Ngurah Suprapta, M.Sc accompanied by the Secretary of the Senate Prof. Dr. Drh. I Nyoman Suarsana, M.Si. The meeting was attended by approximately 124 senate members out of a total of 167 people.
Chairman of the Senate, Prof. Dewa Ngurah Suprapta initiated the meeting by conveying information on the Decree of the Minister of Communications No. 253 / M / KPT.KP / 2017 on the UUD Senate's congress. Prof. Dewa Ngurah Suprapta explained that in accordance with the Decree of the Minister of Research and Technology, the Senate has the duty to carry out the determination, consideration and supervision of the implementation of academic policy and the selection of candidates, the selection of candidates and the election of the Rector candidates for the period of 2017-2021 due to the term of service of Rector Unud of 2013-2017 and period will end 12 July 2017. For the election process of the Rector candidates all stages must be completed no later than June 22, 2017. 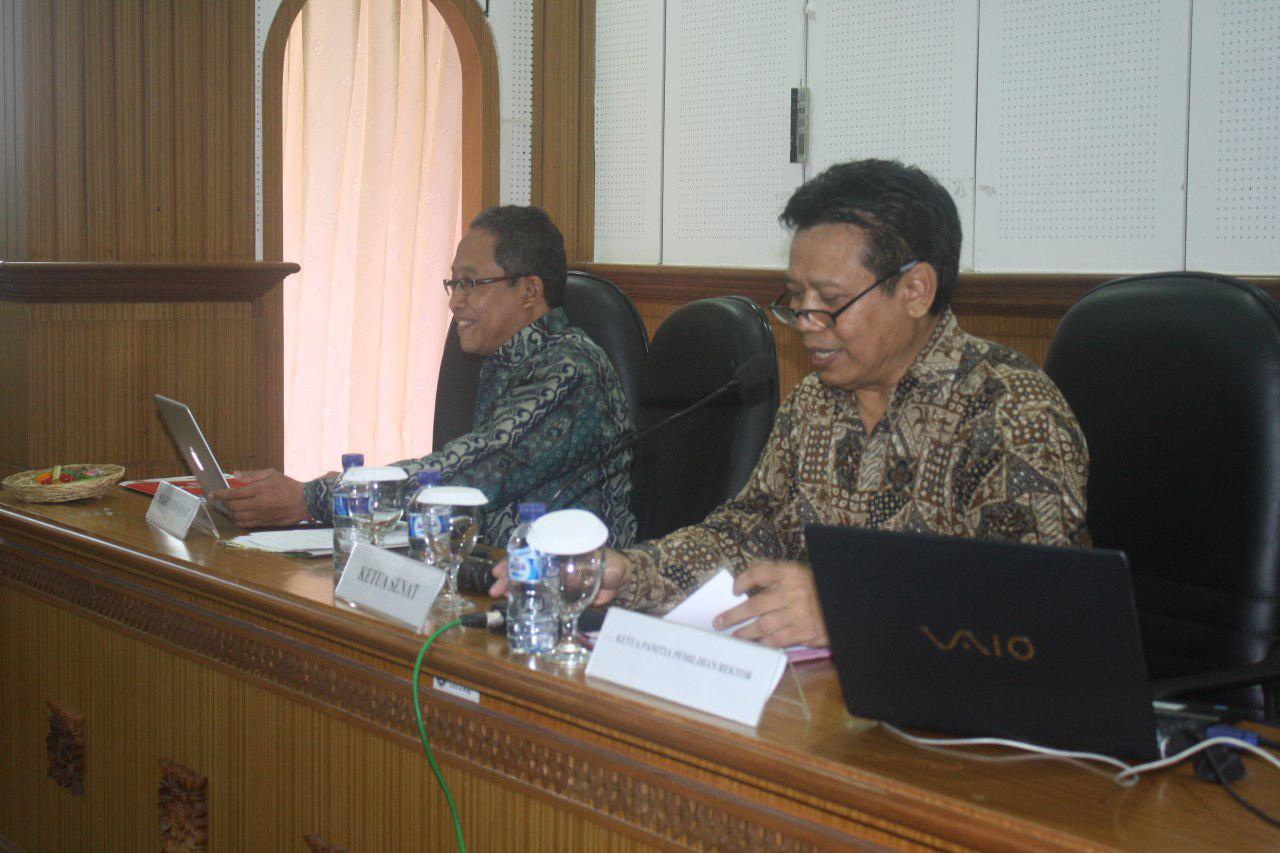 In this meeting also setted Prof. Dr. Gede Mahardika, MS as the Chairman of the Rector Election Committee of Udayana University period 2017-2021. The candidates of the Rector are Ir. I Nyoman Budiarsa, Mt., Ph.D as Number 1, Prof. Dr. Drh. I Made Damriyasa, MS as Number 2, Dr. Drs. A A. Ngurah Gunawan, MT as Number 3 and Prof. Dr. Dr. A A. Raka Sudewi, Sp.S (K) with as Number 4. Serial number is obtained through a drawing process conducted by the Rector of Udayana University's election committee.
Senate Unud agrees the screening process of the Rector's candidates which will be held on Wednesday, June 7, 2017 and the Election of the Rector candidates will take place on Tuesday, 20 June 2017. In the Procedure Rules and Rector Election are stipulated several main points of which are attended by at least 2/3 of The number of members of the Senate, the vote is closed through the voting process in a closed senate meeting that witnessed by representatives Kemenristedikti. Furthermore, the candidate of Rector with the highest number of votes will be determined as the candidate for Rector of Udayana University period 2017-2021. In the election process the Minister has 35% of the total voting power in attendance, and the Senate has 65% of the voting rights and each member has the same voting rights. (PR) 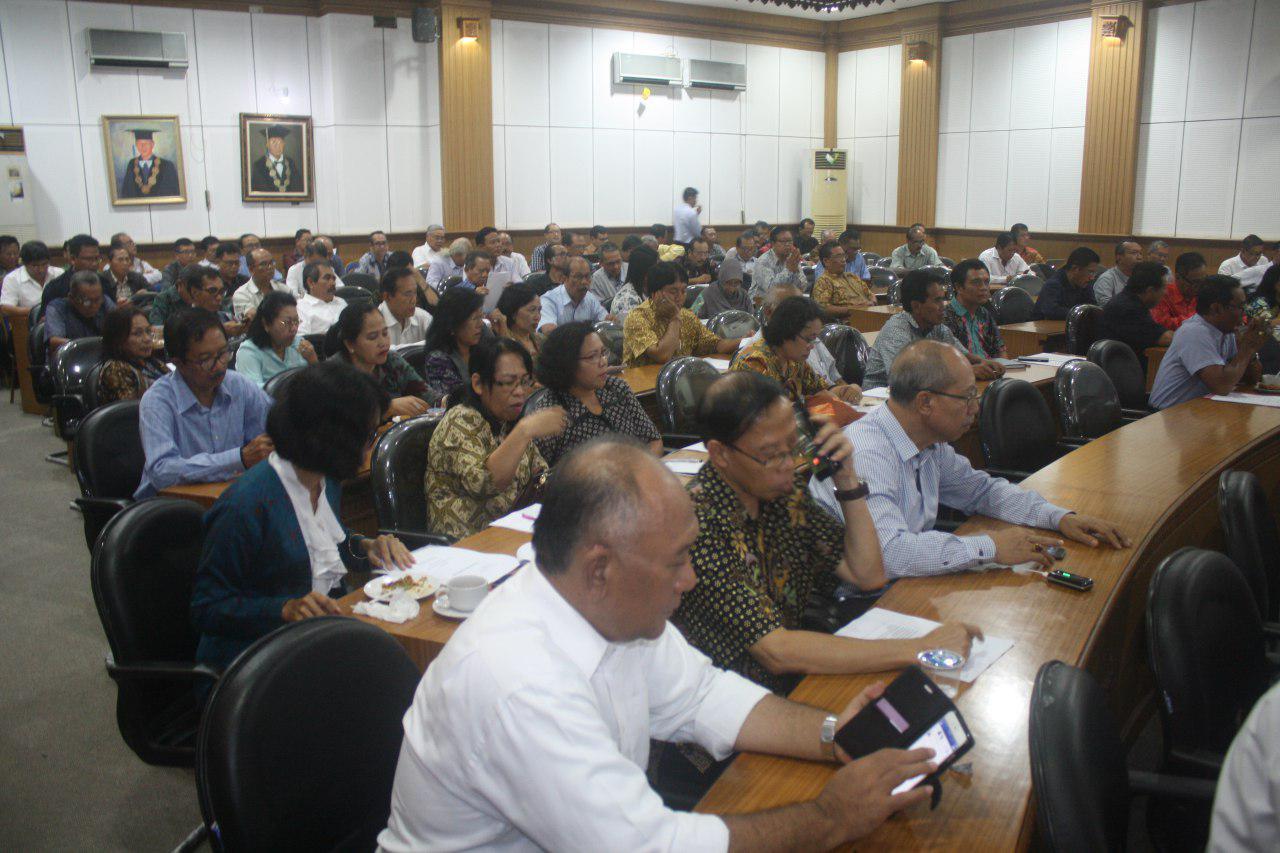