"GenPosting" is Expected to Be a Negative Content Antidote in Medsos 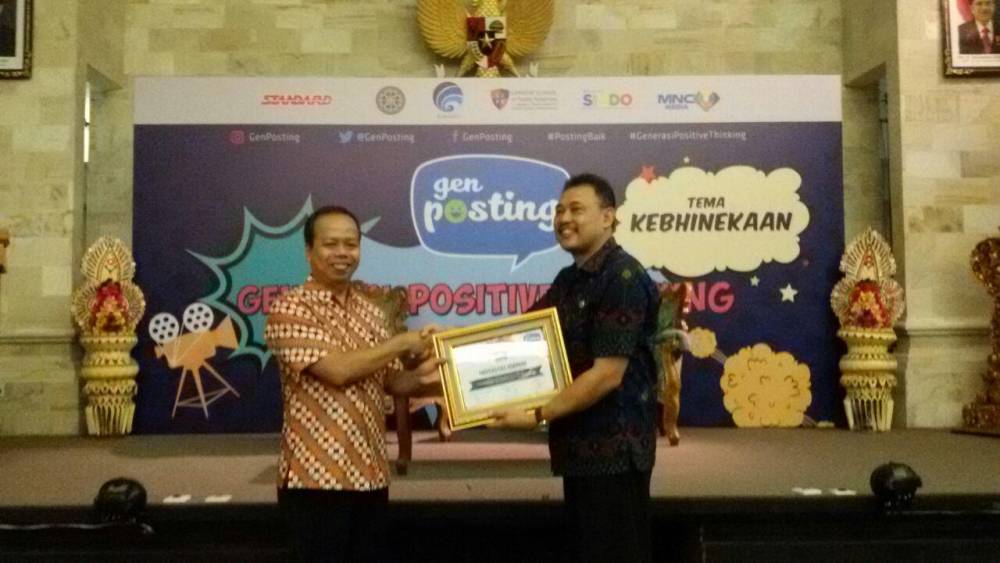 Denpasar - Udayana University in cooperation with SINDO Weekly held a seminar titled "Generation of Positive Thingking (GenPosting)", Friday (21/04/2017) in Theater Room of Faculty of Medicine Unud Campus Sudirman Denpasar. The event was initiated by the Ministry of Communication and Informatics (Kominfo) RI and it aimed to invite young people to spread or upload positive content and information amidst the recent issue / negative content that has a negative impact on inter-community relations in Indonesia.
In addition to Udayana Universites, Bali, GenPosting seminar was also held in 3 other cities namely Bandung, Yogyakarta, and Jakarta. Previously the same event was held at Pasundan University Bandung (23/03/2017) with the theme "Anti Hoax" and at the Indonesian Art Institute Yogyakarta (13/04/2017) with the theme "Mental Revolution". The GenPosting Seminar at Udayana University Bali, the theme was "Kebhinnekaan" and it was attended by 200 students and Vice Deans III of Faculty. 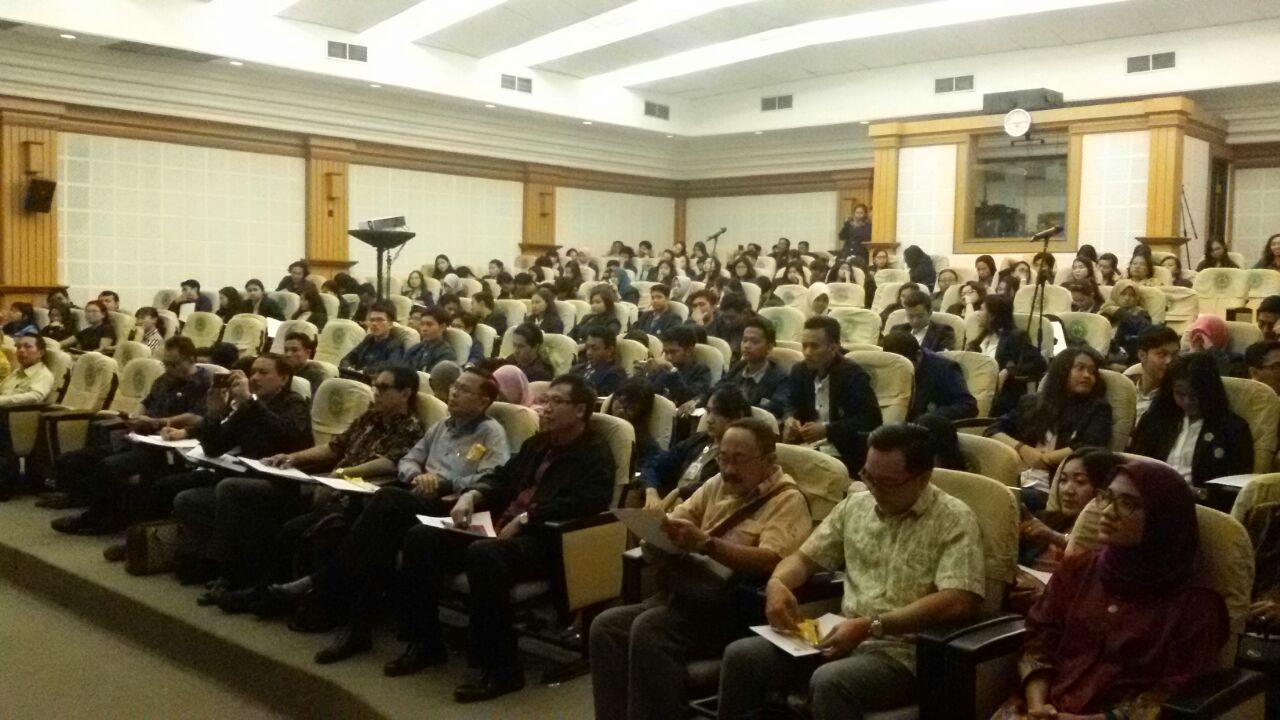 The Head of Bureau Academic, Cooperation and Public Relations of Udayana University, Drs. IGN Indra Kecapa, M.Ed which represented Rector of Unud in his speech conveyed Positive Generation Thingking is characterized by always being positive, saying and positive thinking. According to Indra Kecapa, a person who is positive will tend to talk about the goodness of others rather than his ugliness and prefer to find solutions rather than frustration. Through this activity is expected to foster positive thoughts among students in maintaining diversity in accordance with the theme of this activity.

Representative from Kominfo, Nursodik Gunarjo (Kasubdit Information Provider Directorate of Processing Information) in his speech expressed his appreciation to Unud as the host of this GenPosting event. Nursodik Gunarjo also conveyed the background of this event because of concerns about the rise of negative content on the internet and social media. GenPosting is expected to be a solution to disseminate positive content in social media. 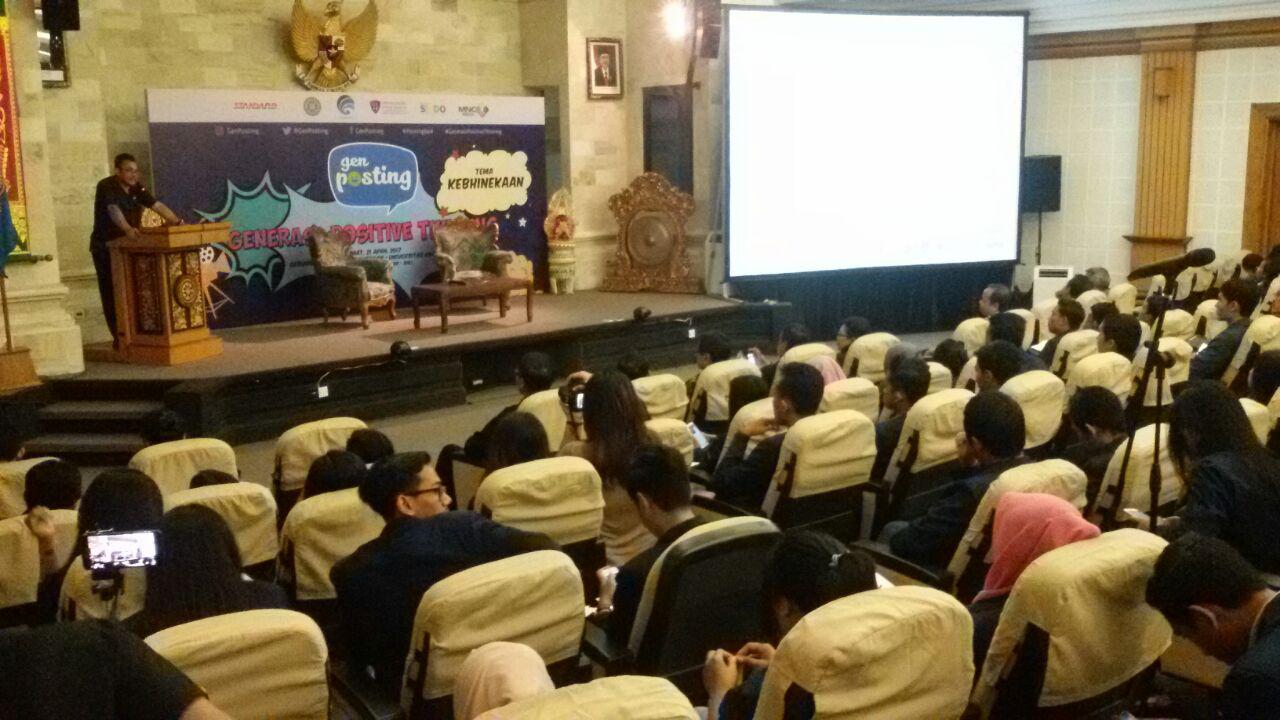 In this seminary, a keynote speaker from the Coordinating Ministry for Human Development and Culture, Ir. Iwan Eka S, M.Sc (Deputy Assistant of Values ​​and Cultural Creativity) with the material of National Movement of Mental Revolution "Positive Spreading the Message" and then coupled Workshop: "How to Make Comic Creative Idea" with the speaker was Muhammad Misrad (MICE) as Indonesian Comic artist and exposure from Andreas Humala as a Digital & Multimedia Practitioner of London School of Public Relations (LSPR).

Participants were very enthusiastic to participate in this seminar which seen from the many interactions that occured. This activity was also enlivened by Band performance and Doorprize. On the sidelines of the event was also present Director General IKP Kominfo RI, Mrs. R Niken Widiastuti who appealed to colleges participate in the role play in stemming HOAX news in social media.

The next event will be held in London School of Public Relations (LSPR) Jakarta with the theme "Environment" (16/05/2017) to come. (PR)