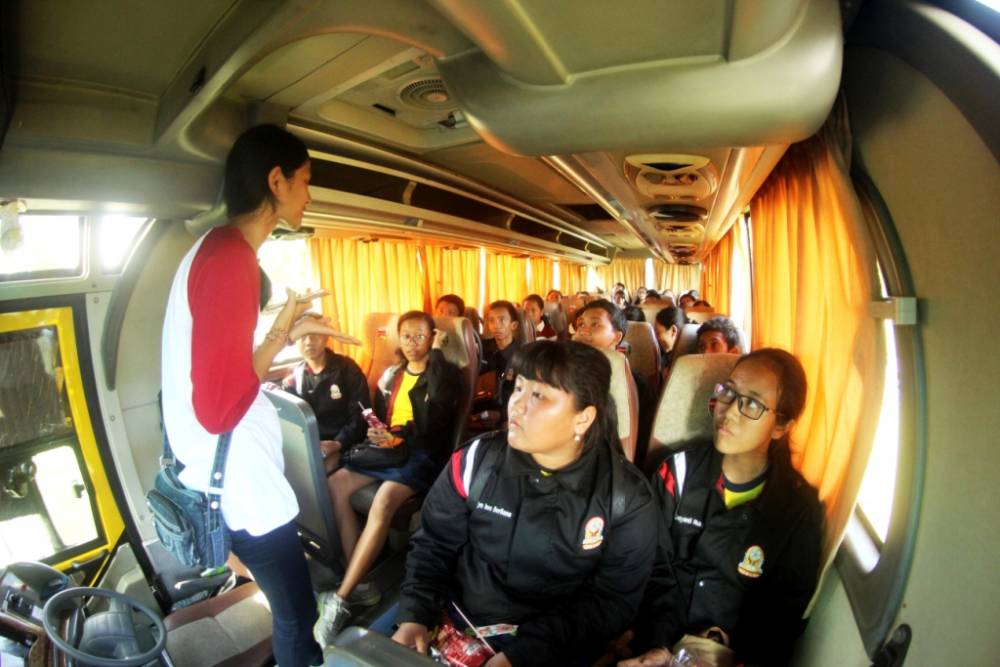 Denpasar- On Sunday, April 23rd, 2017, Public Health Student Association FK UNUD conducted "Cinema on the Bus" activity located around Bajra Sandhi Renon Monument. The event with the theme "Cinema in the Bus "For Better Sexual and Reproductive Health"" was started at 15.00 WITA with participants from junior and senior high school in Badung and Denpasar. The opening was filled with the report from Nyoman Yuni Karunia Surya, as chairman of the committee, greeting by Prof. Dr.dr. Putu Astawa, Sp.OT (K), M.Kes., as the dean of FK UNUD, as well as the opening speech by the Denpasar mayor's representative immediately followed by the official opening of the activity through ribbon cutting. 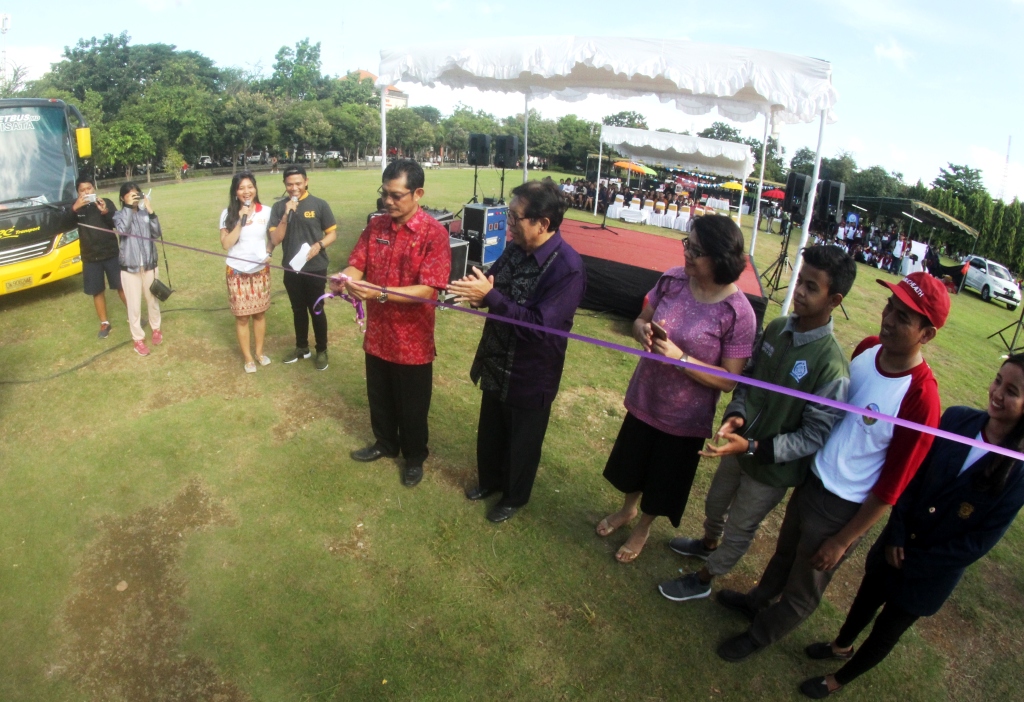 According to the chairman of the committee, CIBUS or Cinema in the Bus is the first activity to provide information about reproductive health through audio visual media of a short film that is watched on the bus and also the kinetic learning is playing and moving. To make it better, this full of innovation activities was held with the cooperation between HMKM FK UNUD with The David and Lucile Packard Foundation. The David and Lucile Packard Foundation is a "private foundation" that grants funds to nonprofit organizations around the world. The foundation, based in California, United States, is a funding organization engaged in various fields ranging from conservation, science, children, family, to the health of the population and reproduction, as did HMKM FK UNUD through this CIBUS activity.

This cooperation started from Yuni, the chairman of the committee, who attended the International Conference on Family Planning 2016 Nusa Dua, where she made a proposal or a brief proposal framework at the "Quality Innovation Challenge" session on innovative activities targeting public health issues, especially youth reproduction in Bali. Together with the team and assistance from various parties, Yuni together with Ngakan Putu Anom Harjana (vice chairman of the committee) managed to get a grant from The David and Lucile Packard Foundation to be able to carry out this CIBUS activity.

"The background of this activity is we see the problems in Indonesia especially in Bali on reproductive health where there are two problems that are still concerning in free sex and unwanted pregnancies. This is because due to inappropriate information access to the teenagers in Bali so they are vulnerable to hoaxes, myths and various information, which is not true. Here we play a role and provide information and assistance in solving problems by making Cinema on the Bus activities" said the student from the 2014 generation.

Not only cooperation in the field of funding, CIBUS also collaborate with other institutions that have the same scope and mission that is in the field of public health. These institutions include Kisara (Kita Sayang Remaja) who open an information booth, Generation Planning Forum which opened an educative game booth, as well as Udayana One Health Collaborating Center (OHCC) which helped from the cultivation of the proposal to the implementation of the activities. 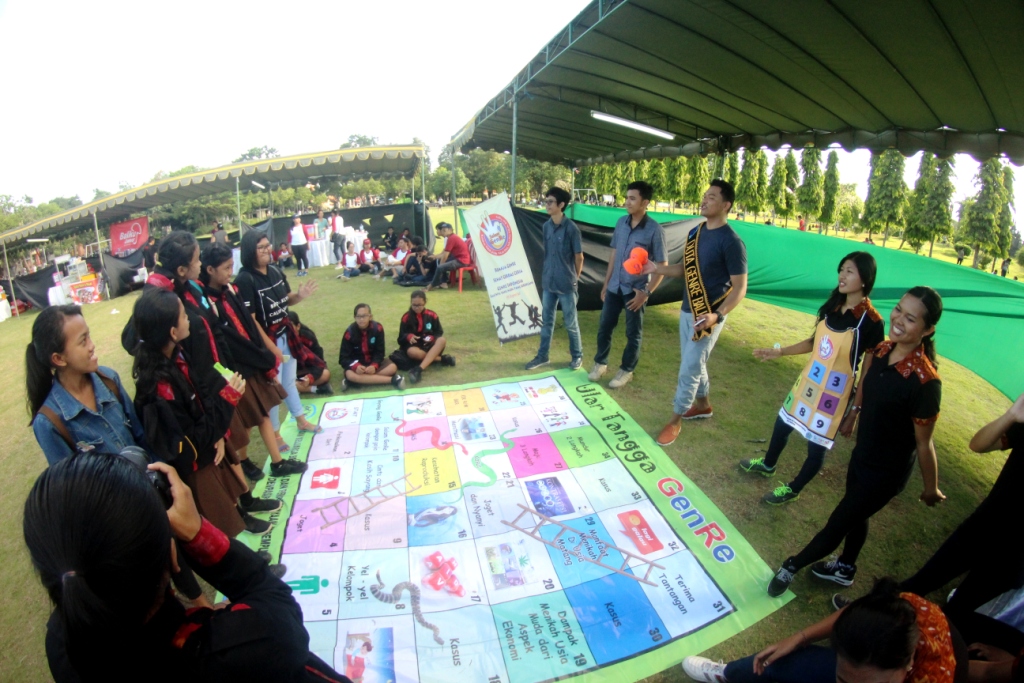 In addition to educational cinema playback on reproductive health and reproductive health games, participants can also enjoy photobooth facilities, food booths, souvenir booths. The enthusiasm of CIBUS participants in Denpasar-Badung is quite high, in which to facilitate all participants will continue until the next day on Monday, April 24th, 2017, in the same location. But not only stop until Denpasar-Badung region, in accordance with the aim of CIBUS to target teenagers throughout Bali, this activity will continue to other districts in Bali until May. Regarding the registration information, junior and senior high school students in Bali can contact Josua (08111196196), Yuni (087861132319) or join CIBUS social media on Instagram (@cibustelolet), Facebook (Cibus Telolet) and Twitter (@cibustelolet).

"In the future we have plans to collaborate with other institutions such as Sarbagita which will not only target teenagers but also those who have entered the late teens or early adulthood" explained Yuni. She also hopes that teenagers can take advantage of this activity as well as possible because reproductive health is very important where not only for their personal but also their families later. "I would like to thank as much as possible especially for the coaches including KM FK Chairman of UNUD Dr. I Made Ady Wirawan, Ph.D., creative consultant Putu Surya Triana Dewi, S.T, M.ds., and all the committees that have helped this event to run smoothly and well" she concluded. (mimi)