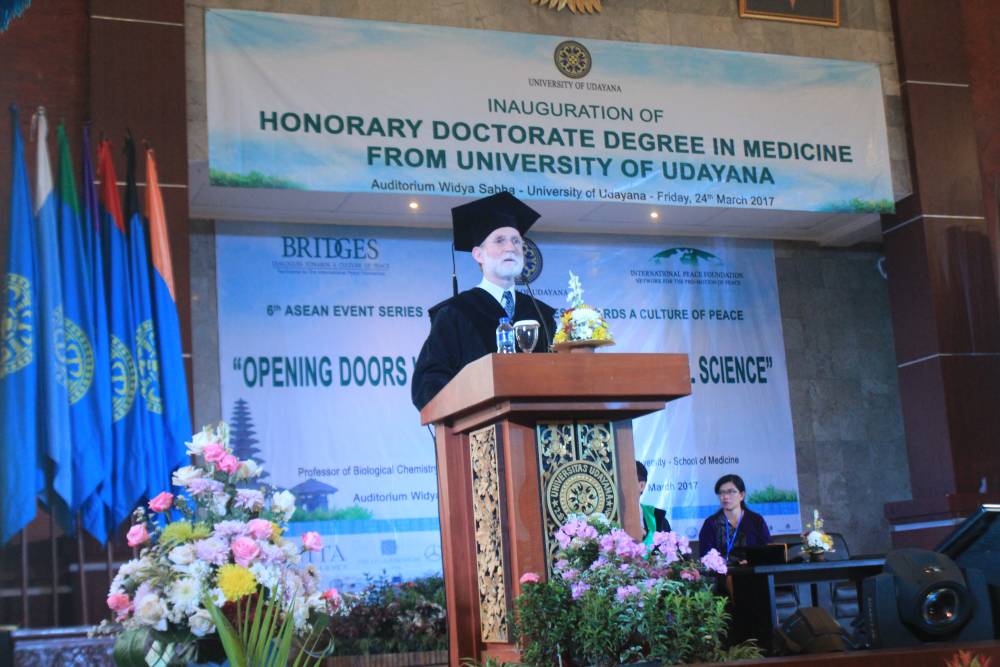 Bukit Jimbaran.- Udayana University (Unud) held a public lecture (general lecture) on the topic "Opening Doors Worldwide through Medical Science that presented the Nobel Prize Chemistry 2003, Dr. Peter Agre, on Friday (24/3), at the Auditorium Widya Sabha, Campus Bukit Jimbaran Udayana University, Bali. The public lecture event coupled with the conferring of an Honorary Doctorate, or a fairly commonly known as Doctor Honoris Causa / Dr. (H.C.), by Unud,  Dr. Peter Agre given as a form of appreciation for his achievements and his findings which were very helpful. Symbolically, this title was conferred by the Rector of Udayana University Prof. Dr. dr. Ketut Suastika, Sp.PD KEMD through the Open Senate Assembly.¬¬¬ Rector Ketut Suastika revealed that the provision of this title is special because the ceremonies performed for the first time the establishment of the University of Udayana.

Dr. Peter Agre, a medical doctor and molecular biologist was born in Minnesota, USA, on January 30, 1949. Currently, he is director of the Johns Hopkins Malaria Research Institute (JHMRI) at the Bloomberg School of Public Health and recorded once served as president of the American Association for the Advancement of Science. Dr. Peter Agre also be a member of the Advisory Board of the International Peace Foundation and has received 17 honorary doctorates similar from a university in Denmark, Greece, Hungary, Japan, Mexico, Norway, Poland, and the United States (University of North Carolina at Chapel Hill) as well as the award "the commandership in the Royal Norwegian Order of Merit" from HM King Harald V. 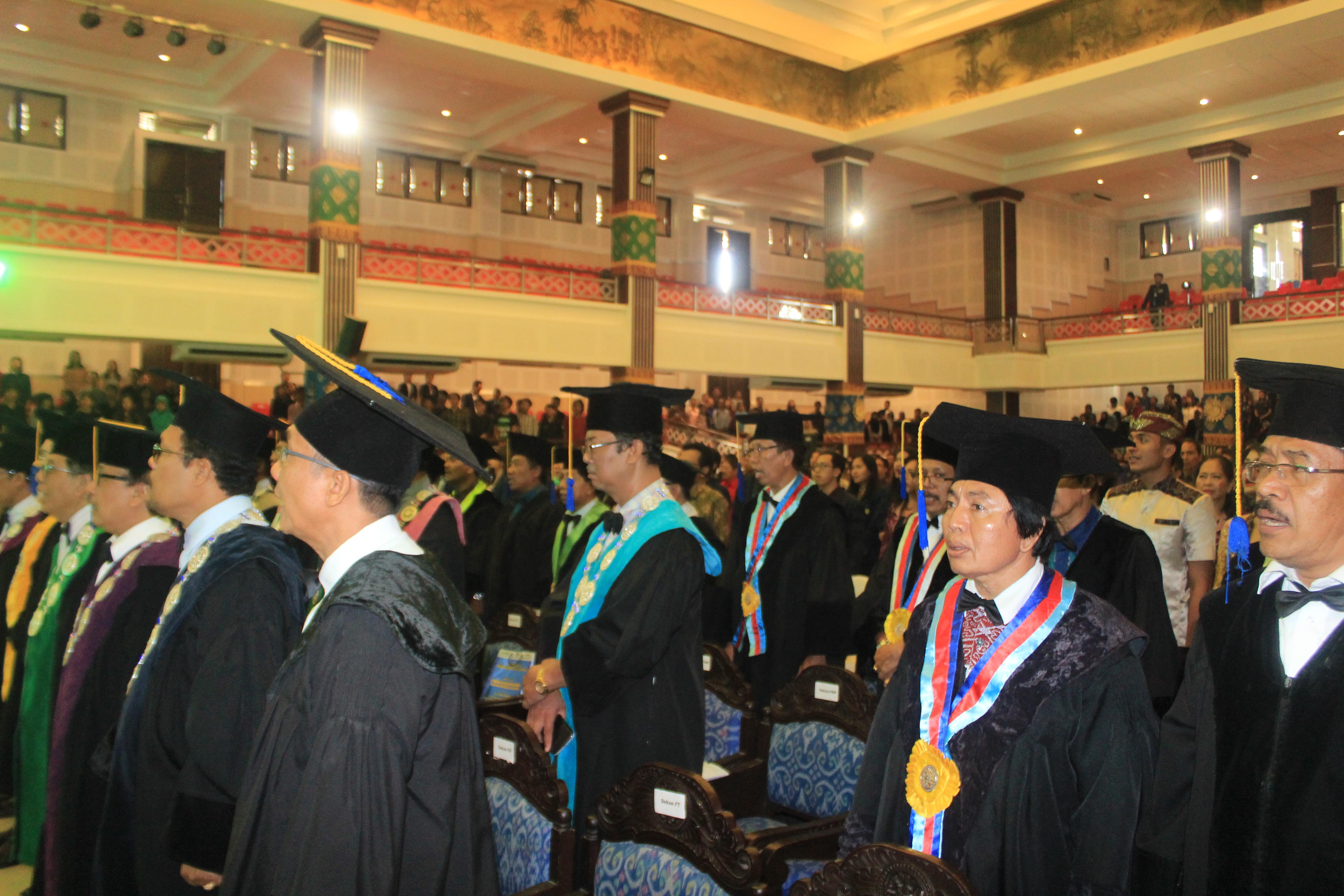 In 2003, he together with Roderick MacKinnon of Rockefeller University received the Nobel Prize in Chemistry for his discovery on aquaporins, the proteins that move water molecules through the cell membrane. Its discovery has been a major contribution to world health. After getting a research grant from JMHRI, Dr. Agre then continued his research on aquaporins for malaria, which examines the possibility of utilization of aquaporins as a means of treatment or prevention of disease. Therefore, the results are very satisfactory, he then focused his research on malaria.

This event was facilitated by the International Peace Foundation, a reputable non-profit organization based in Vienna, Austria. This event also presented Governor of Bali, along with other important officials in Bali, Mr. Uwe Morawetz, Founding Chairman of the International Peace Foundation and Mr. Daniel Bednarik, Director of Events Coordination.

Chairman of the Committee Dr. Ni Putu Sri Harta neem stated that these activities invited more than two thousand students and faculty as well as invitations from various government institutions and universities and the private sector in Bali or outside Bali as she mentioned that these activities also offer a door prize draw for participants who attend.

This event was packed in a series of Bridges Dialogues Towards a Culture of Peace, which was held at 14 leading universities in Indonesia, including Unud. Before giving a Public Lecture at the University of Udayana, Peter Agre also gave a public lecture at the Institute of Technology Bandung and Universitas Padjadjaran Bandung on March 22, 2017 last. (RAS/PR) 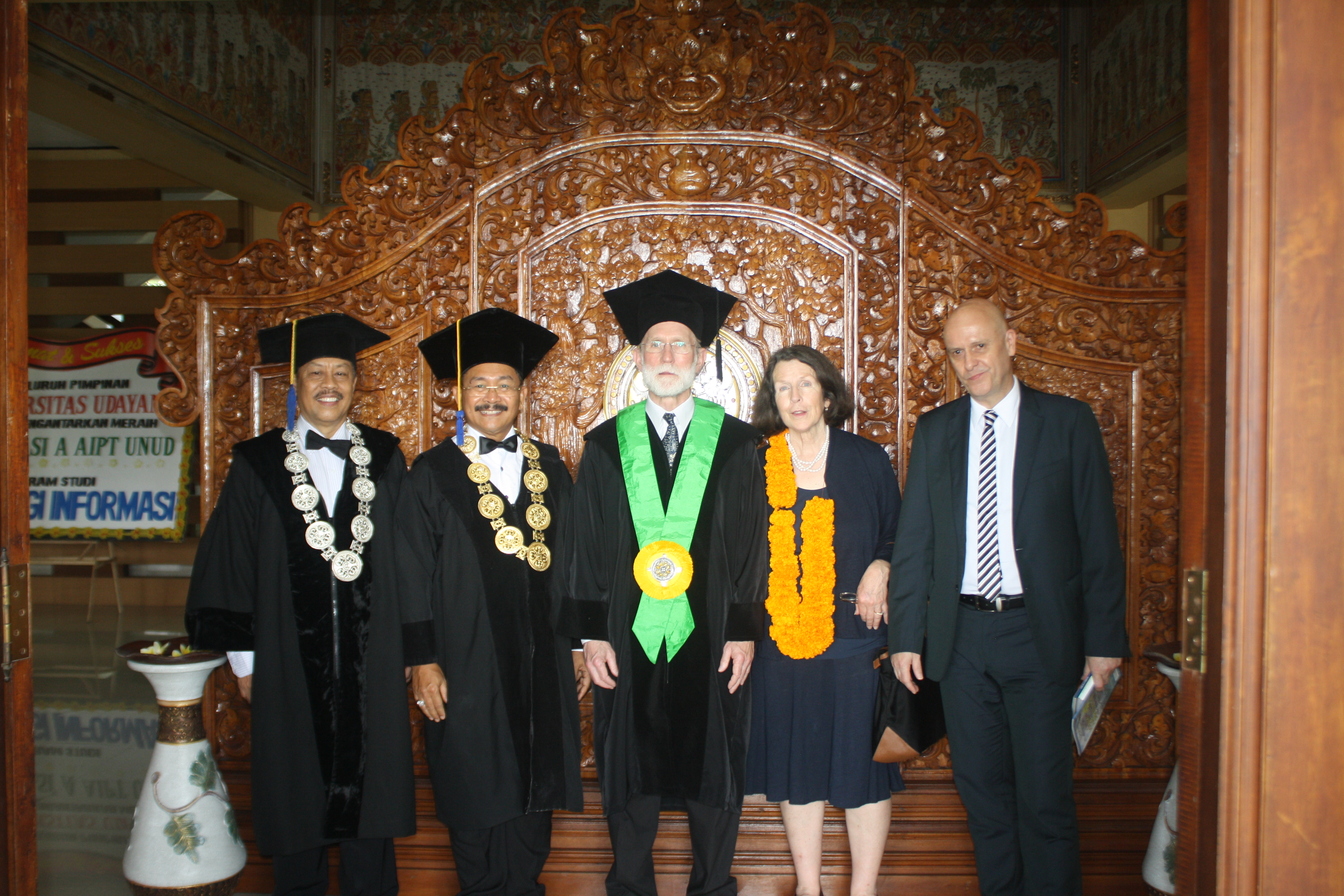