72nd Anniversary of the People's Republic of China, Momentum for Strengthening Cooperation between Indonesia and China 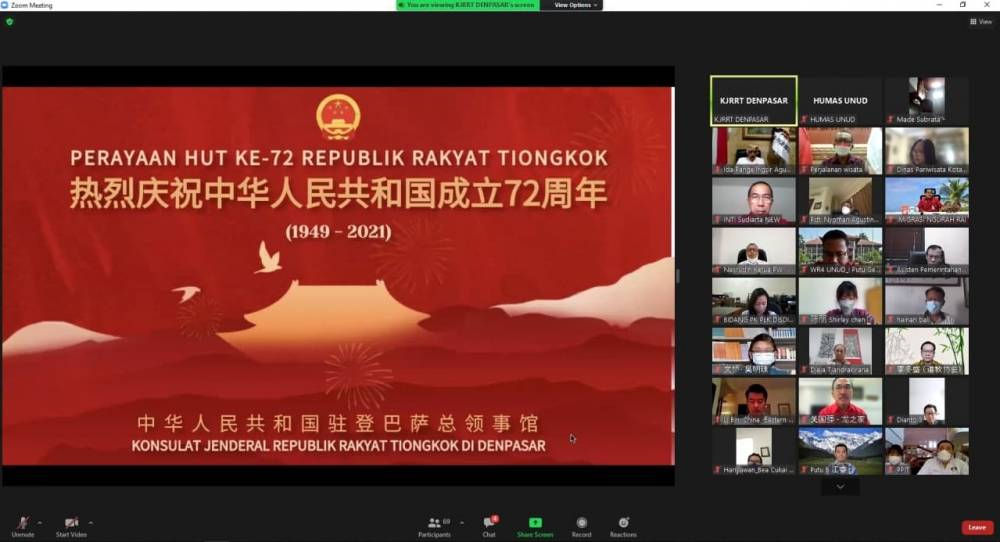 The People's Republic of China (PRC) through the Consulate General of the People's Republic of China in Denpasar held a bold event for the 72nd Anniversary of the PRC through the Zoom Meeting application, Tuesday (28/09/2021). The Vice Rector for Planning, Cooperation and Information was also present on behalf of the Chancellor of Udayana University. 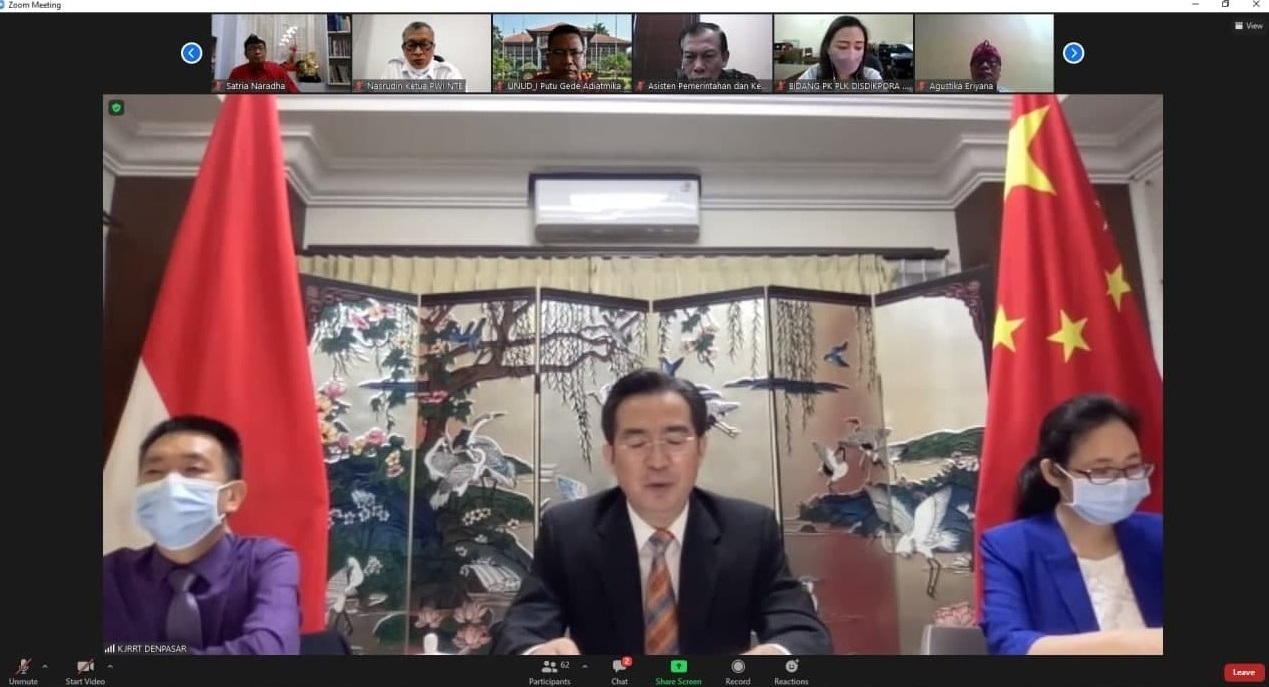 Mr. Zhu Xinglong, Consul General of the PRC in Denpasar, said that the Covid-19 pandemic that has hit the world since the beginning of 2020 has had a major impact on human health and the world economy. Facing the Covid-19 pandemic, China and Indonesia work hand in hand where cooperation between the two countries continues to increase during the pandemic. Mr. Zhu Xinglong hopes that China and Indonesia will be more prosperous and prosperous and the friendship between Indonesia and China will last forever.

Representing the Rector of Udayana University, on this occasion the Vice Rector for Planning, Cooperation and Information of Udayana University Prof. Dr. dr. I Putu Gede Adiatmika, M.Kes added that since the establishment of the Chinese Consulate General in Denpasar, the Bali Provincial government's cooperation with several provinces in China, such as Yunnan, Hainan, and Jiangxi Provinces, has become increasingly vibrant. This is evidenced by the establishment of several Balinese villages in China's Hainan and Fujian provinces, which introduce Indonesian culture to the Chinese community. Likewise, the arts delegation from the provinces of Hainan and Yunnan in the 2015-2019 Bali Arts Festival enhances cultural and diplomatic relations between the two countries. 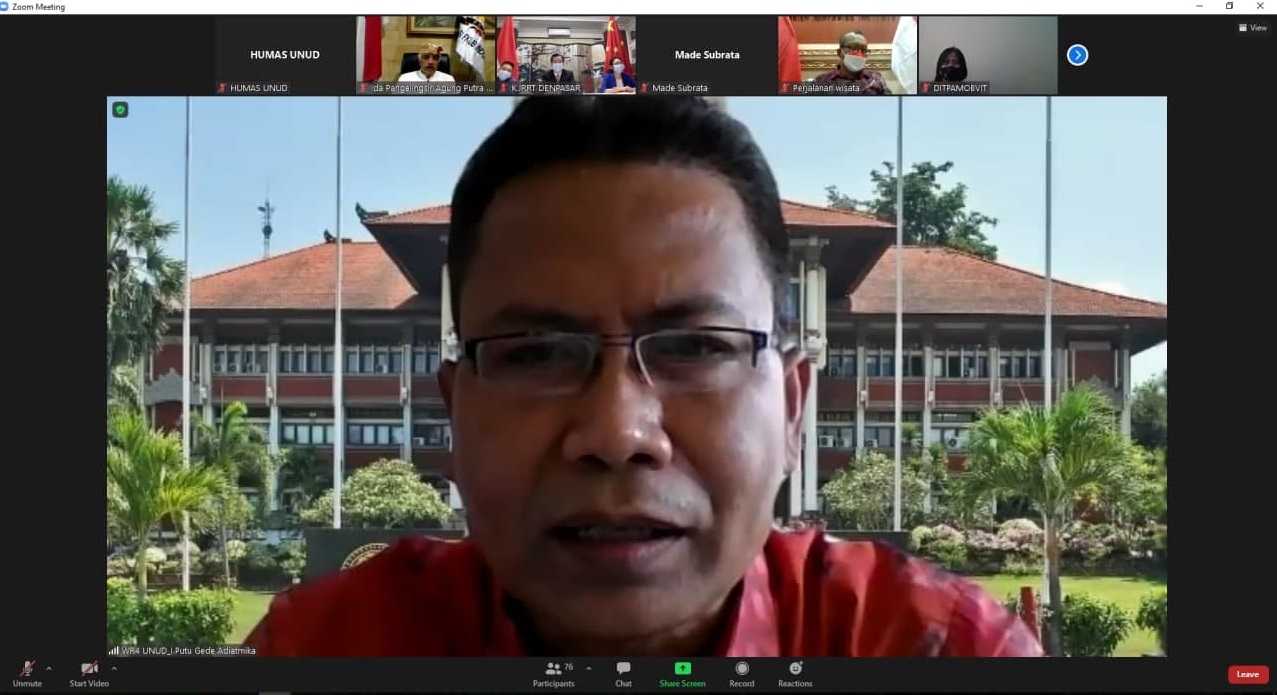 In addition, cooperation in the fields of education, cultural exchange, and student exchange between Nanchang University, Nanchang Normal University in Jiangxi Province, and Sanming University in Fujian Province has also been realized by the establishment of the Tourism Confucius Institute (TCI) at Udayana University which is strengthened by MoU and LoI between parties. Currently, cooperation in the field of human resources is being developed through the assistance of the Chinese Consulate General in Denpasar with Udayana University.

The MoU with the Consul General of the PRC in Denpasar was carried out to improve human resources in the tourism sector to welcome Chinese tourist visits in the New Normal situation.

The Chinese Consul General in Denpasar is also the sponsor of the Mandarin language training for Customs and Immigration staff at Ngurah Rai Airport, Denpasar Sanglah Hospital Medical Staff, Bali Provincial Tourism Office Staff, Bali Police Staff and guides who are members of the Indonesian Tourist Guide Association (HPI). Bali branch that will take part in Mandarin language training. They will all be at the forefront of welcoming Chinese foreign tourists in the New Normal era.

The Vice Rector hopes that the 72nd Anniversary of China will be a momentum to increase cooperation in various sectors to improve the welfare of the two countries.